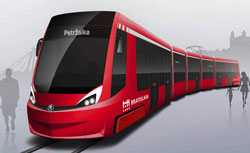 ”We see Slovakia as our traditional and very significant business partner. Our most modern locomotives 109 E2 (Emil Zátopek) with push-pull sets are already used in the common traffic on the Slovakian railway. Or I can remind you how our daughter company Škoda Electric concluded a contract for the supply of eighty new trolleybuses for Bratislava for about 1,1 milliard Czech crowns only several weeks ago,“says general manager of the company Škoda Transportation Josef Bernard.

“I am glad that we will be able to provide our passengers with high-quality services in new and modern trams. I believe that we will have managed to replace at least a half of the tram rolling stock in Bratislava in four years,” said general manager and chairman of the Board of Directors of Dopravní podnik Bratislava Lubomír Belfi.

New trams will contribute especially to the increase of the quality of travelling for passengers. Their comfort will be taken care of to the maximum extent, in particular due to enough space, suitable position of retaining devices and also due to a very quiet operation of the trams. The vehicles will have a complete air-conditioning, including the driver cabin. A sliding platform will be prepared for physically handicapped persons. The vehicles will also include a device for voice communication between the visually impaired and the driver.

“People in Bratislava can look forward to new two-way 5 articulated 30 T, which follow up on the series of two-way vehicles, which have been popular among passengers in the Italian town of Cagliari, American Portland or Polish Wroclav. However, trams for the Slovakian capital will be newly based on modern trams 26 T, which are intended for the Hungarian city of Miskolc. Bratislava trams will have the chassis with wheel gauge of 1000 mm and the first and last chassis will be fully rotary,” adds Jaromír Jelínek, commercial manager of Škoda Transportation.

The company Škoda Transportation has been very successful in the tram market recently. ”Besides Bratislava, we managed to conclude a contract for the supply of 60 low-floor trams for the Turkish city of Konya. We also signed a contract with the Chinese company CSR Sifang Quingdao about the license for technologies for production of low-floor trams of ForCity type. The total value of this contract can reach up to 5 milliard of Czech crowns. Moreover, first trams from 31 in total are currently heading to the Hungarian town of Miskolc,“ adds Josef Bernard.

”Both inhabitants of Bratislava and its visitors have just received a very positive news. The city can modernise the rolling park of the transport company due to the European financial help. The city has the possibility to buy new and modern trams and trolleybuses in the next few years,” as Milan Ftáčnik, mayor of the capital of Bratislava commented on the newly concluded contract.