Autonomous buses to be trialled in Germany

The Karlsruher Institute for Technology has confirmed that the autonomous buses will be trialled in Mannheim and Friedrichshafen, before other suitable sites in the state are located. 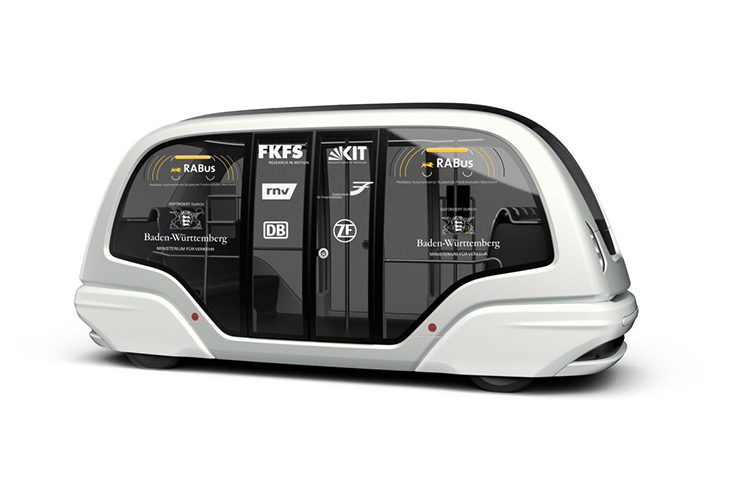 The buses will be small enough to integrate into urban traffic and will carry 22 passengers. Credit: Karlsruher Institute for Technology

Autonomous buses are set to be trialled in the German cities of Mannheim and Friedrichshafen, says the Karlsruher Institute for Technology (KIT) and the RABus Consortium. KIT says the project will result in a model concept for efficient public passenger transit with autonomous busses in the state of Baden-Württemberg, where the State Ministry of Transport will fund RABus with €7 million.

RABus, the real-world lab for automated bus operation in urban and rural public passenger transit, is one of the ways Baden-Württemberg hopes to reach its strategic goals for automated and networked public transport.

According to KIT, current automated buses in road-based public passenger transport are mostly operated at low speed. This results in longer driving times and reduces acceptance and usage by passengers. The RABus Consortium is hoping to change that by testing its buses in what it has called “real-world labs”. It is hoping to have a working system in place by 2023.

To ensure adapted and safe driving, KIT says the autonomous buses are planned to go with the flow of traffic at acceptable speeds both in the cities and in their suburbs. The buses will be made by 2getthere, a subsidiary of ZF Friedrichshafen AG, offering room for up to 22 passengers. The compact dimensions of 6 x 2.1 x 2.8 m mean the buses can be integrated in urban traffic flow in what KIT has called a demand-driven and schedule-independent way.

“RABus will be a real-world lab to produce useful data by operating several vehicles under real conditions. This goes far beyond mere demonstration operation,” says Dr. Martin Kagerbauer from KIT’s Institute for Transport Studies (IFV). KIT says the IFV will put monitor the test and analyse demand, acceptance and the impact on urban traffic in order to give feedback for future autonomous systems. In addition, a transport model will be developed that will use the data to identify other potentially suited regions in Baden-Württemberg.

Five mobility trends to watch out for in 2021