It is hoped that the project will encourage commuters to settle in Delhi’s surrounding towns and cities, which would ease congestion and pollution in the capital. 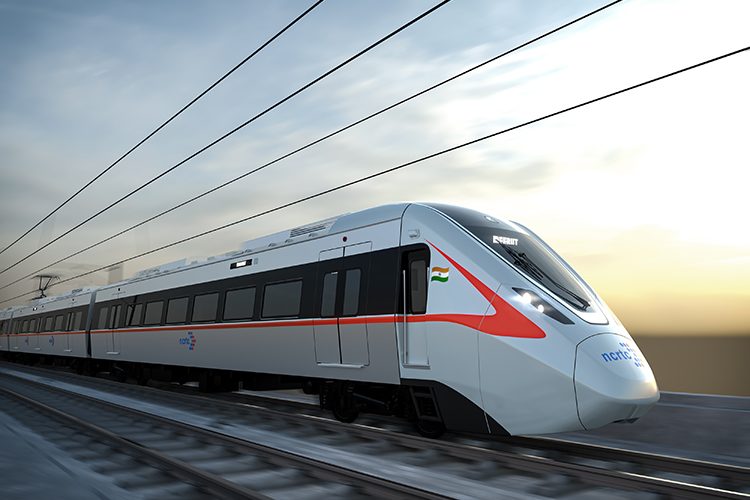 The RRTS rail corridor rolling stock will all be made in India, according to NCRTC.

A loan agreement for $500 million has been signed between Government of India and New Development Bank (NDB) to fund the Delhi-Ghaziabad-Meerut Regional Rapid Transit Service (RRTS) rail corridor.

The loan will be used to finance rolling stock, a signalling system, operational structures, residences for operational staff, as well as train control and telecommunications systems.

Speaking on the occasion, Shri Vinay Kumar Singh, Managing Director of the National Capital Regional Transport Corporation (NCRTC, based in Delhi), said: “NCRTC is committed towards the Hon’ble Prime Minister’s vision of an Atmanirbhar Bharat. This is a unique multilateral funding arrangement that allows Make in India provision in procurements.

“This loan agreement with NDB will be a shot in the arm for NCRTC’s efforts of developing the indigenous capacity to create a new age infrastructure for the New India. With features like multi-modal integration and interoperability, RRTS will lead to polycentric development and significantly curb pollution and congestion in NCR by providing fast, reliable, secure, and all-weather connectivity.”

NCRTC says the project will develop an efficient and sustainable regional passenger transport system and reduce congestion by offering the public the alternative of settling in the surrounding cities and being able to commute to Delhi through fast, reliable, safe, and comfortable public transport. The implementation of Delhi-Ghaziabad-Meerut RRTS Corridor will, according to NCRTC, boost the number of people using public transport in the region. It is hoped that the share of public transport will move from 37 per cent to 63 per cent in the region, which will help curb congestion and pollution significantly.

The 82km Delhi-Ghaziabad-Meerut RRTS rail corridor will have a total of 24 stations and will be elevated for around 70.5 km, with 11.5 km of its stretch being underground. Civil construction work is in progress on more than 50 km of this 82 km long corridor. The 17km-long priority section between Sahibabad and Duhai of this corridor is scheduled to commence operations in 2023, with the entire corridor open to the public by 2025.

NCRTC says the corridor will employ state-of-the-art technology to reach speeds of up to 180 kph. These include ETCS Level-2 signalling systems, ballastless tracks, and track fastening systems. and In addition, 100 per cent of the rolling stock will be made in India. For much of this technology, it will be the first time it has been used in India. The RRTS rolling stock is being designed and manufactured in Savli, Gujarat under the Make in India initiative.

All three Phase-I RRTS rail corridors (Delhi-Ghaziabad-Meerut, Delhi-Gurugram-SNB-Alwar and Delhi-Panipat) will converge at Sarai Kale Khan in Delhi and will be interoperable. The RRTS stations will, according to the corporation, be seamlessly integrated with nearby transport modes such as metro stations, Inter-State Bus Terminals, railway stations, and airports. The NCRTC is hoping that this clean and green rail-based system will set a benchmark for similar future projects.