With changes for drivers coming at a steady rate, TfL has issued a reminder to those in vehicles to be mindful of the extra walkers and cyclists on London roads. 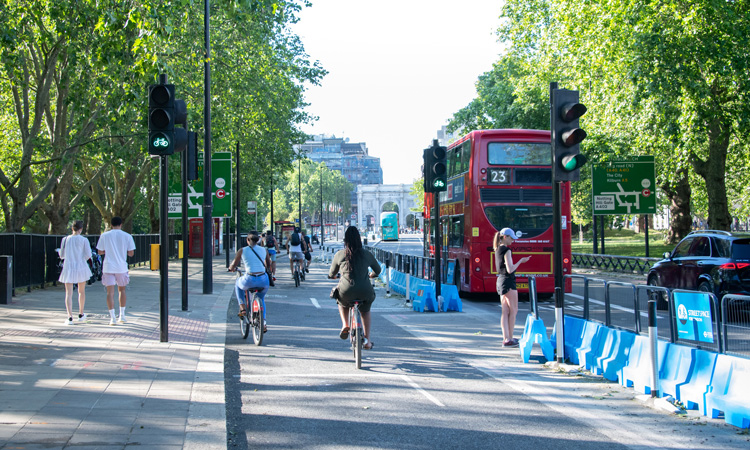 Transport for London (TfL) is reminding Londoners to drive safely as large numbers of people are walking and cycling, and significant temporary infrastructure changes are being made across London to protect them.

Changes are being rolled out at pace through TfL and the Mayor’s Streetspace for London plan. Footways and bus platforms have been extended across the capital, creating an additional 19,000m² of space for people walking and cycling in the past month.

In total, 21 Streetspace schemes have now been completed, including expanded footways outside busy commuter hubs such as London Bridge, Victoria and Waterloo stations and a new cycle lane on Park Lane. The speed limit on Park Lane has been reduced from 40mph to 20mph to reduce road danger further, and TfL plans to introduce 20mph speed limits on more main roads across the capital as part of the Streetspace plans.

Lower speed limits were introduced across the central London TfL road network in March and an urgent review is underway to identify how these limits can be expanded to further streets across central London – including next to cycle lanes – to offer further protection to vulnerable road users.

The warning from TfL comes as the city has seen an increase in speeding, resulting in a number of road fatalities and injuries. Since 20 March when the lockdown began, 16 people have died on London’s roads, despite an average reduction of 35 per cent in traffic levels. The latest statistics show that while eight fewer people have died during lockdown compared with the same period last year, the number of people riding motorcycles and cycling killed in road traffic collisions has risen. During this time, there have been ten motorcyclists killed on London’s roads, with two people walking and two cycling.

Siwan Hayward, TfL’s Director of Compliance and Policing, said: “We’re working closely with the Mayor and local boroughs to provide a huge range of new walking and cycling facilities, ensuring Londoners can get around safely as lockdown measures are eased. Drivers are reminded that a number of road layouts may have changed and with more people walking and cycling, it is more critical than ever to slow down, drive carefully and within the speed limit.”

Fares in the time of COVID-19: finding the ticket to recovery