The Sustainable Bus Update: volume one

As part of our new regular feature, The Sustainable Bus Update, Intelligent Transport summarises the most recent and standout sustainable bus purchases and developments from across the globe.

Transports Metropolitans de Barcelona (TMB) has announced that it is incorporating 105 new buses into its fleet. As well as being environmentally advanced (ECO label) and designed for maximum accessibility, each vehicle features artificial assisted driving systems for improved road safety.

The 105 buses were purchased in 2019 by public competition from the MAN manufacturer, as part of the systematic fleet renewal programme, for a total amount of €34.7 million plus VAT.

In terms of technology, the buses are said to be a step forward in adopting the smart accident prevention system using artificial vision cameras, connected to a data recognition and processing tool, which interpret the movements of the ‘real-time environment to help drivers prevent potential collisions while providing information on risk points on the city’s road infrastructure’.

The new buses are also said to have improvements in accessibility, such as reserved wheelchair spaces, folding side bars, adjustable straps, wider doors and adjustable ramps.

Of the new buses introduced, 30 are standard diesel-electric hybrid engines. Barcelona therefore has 386 electric or hybrid buses in the urban service – 34 per cent of the fleet.

TMB has stated that it will continue to modernise the bus fleet with new orders, always with the green purchase criteria and progressive electrification. Thus, last February, it was awarded the supply of 23 ready-to-use fast-charging street units, which will advance the conversion of H16, H12 and V13 lines to zero emission lines. In subsequent years, the investment (estimated €115 million in the three years 2019-2021) will continue for the acquisition of electric and hybrid buses and the corresponding charging infrastructure, with the aim of replacing them by 2024.

With the arrival of the 105 buses, the total TMB vehicles participating in this safe fleet project will be 184, which will continue to increase with successive orders for vehicle renewal.

Singapore to purchase electric and hybrid buses only

As part of the move towards a 100 per cent cleaner energy public bus fleet by 2040, the Land Transport Authority (LTA) announced in late 2019 that it will progressively deploy electric buses for passenger service from early 2020.

This includes 60 electric buses procured under a tender awarded in October 2018, which will arrive in Singapore progressively in the first half of 2020. It also includes one electric bus retrofitted from a diesel bus as a proof-of-concept trial to determine the feasibility of converting existing diesel buses to electric buses.

The Senior Minister of State for Transport, Janil Puthucheary, was recently quoted in The Strait Times stating that the government will now buy either electric or hybrid buses, adding to its commitment to have its 5,400 buses run on cleaner energy by 2040.

Beyond buses and taxis, Singapore also plans to phase out all vehicles which are solely powered by combustion engines by 2040, which Puthucheary described as ambitious, according to The Strait Times. “This means that after 2030, we should see no new purchases of internal combustion engine vehicles,” he noted.

Record year for Solaris in 2019

2019 was a record year for Solaris – the company achieved its biggest ever sales volume, manufacturing 1,487 vehicles. Furthermore, Solaris saw record sales revenues of PLN 2.6 billion in 2019. This represents a climb by nearly 40 per cent year-on-year.

Currently, products of Solaris can be found in 32 countries, in over 750 cities. In total, the manufacturer has supplied nearly 19,000 vehicles to its customer so far. In 2019, the biggest sales markets of Solaris were Poland, Germany, Belgium, Lithuania and Italy.

In 2018, hybrid and electric buses as well as trolleybuses constituted in total 29 per cent of all vehicles sold. Meanwhile, in 2019, their share in sales increased by 11 percentage points to 40 per cent.

TransLink has asked the Vancouver Mayors’ Council on Regional Transportation to support its updated Low Carbon Fleet Strategy, which puts the region on the path to converting all buses to zero emissions technology by 2050. Metro Vancouver can make significant progress over the next decade by replacing 50 per cent of the diesel and natural gas fleet with clean, zero-emissions battery electric models, according to TransLink.

TransLink will require $95 million to $447 million in new funding over the next 10 years to proceed with the strategy. The amount of funding required is dependent on which approach the Mayors’ Council chooses; cautious, progressive or aggressive.

“Transitioning the bus fleet to zero-emissions technology is an essential step toward breaking the region’s dependence on fossil fuels,” said TransLink CEO, Kevin Desmond. “This strategy sets out a bold course that will eventually allow us to provide 100 per cent green public transportation.” 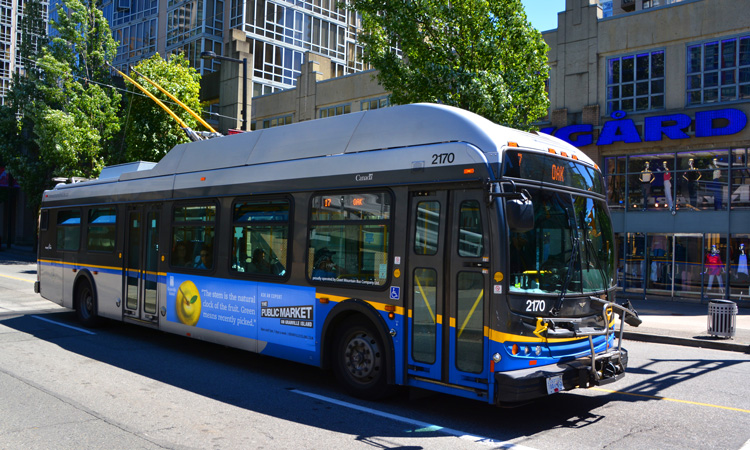 As part of a $22.9 million investment, the Orange County Transportation Authority (OCTA) has joined with local, state and federal officials to mark the debut of the largest transit-operated hydrogen fuelling station in the U.S. and 10 new hydrogen fuel cell electric buses.

“We are very happy to be leading the way toward a cleaner and greener future that keeps the residents of Orange County moving, while keeping the air they breathe healthy with zero emissions,” said OCTA Chairman, Steve Jones.

The new hydrogen fuelling station was unveiled at OCTA’s Santa Ana Bus Base. OCTA officials were joined at the event by representatives from the partners in the project, including the California Air Resources Board (CARB), South Coast Air Quality Management District and Center for Transportation and the Environment (CTE).

“We are proud to be working with all of our partners to set a strong example as a large urban transit operator making a positive impact on the environment,” said OCTA CEO, Darrell E. Johnson. “We will continue to explore the use of zero-emission technology to ensure we deliver a balanced and sustainable transportation system for Orange County’s future.”

“California’s transit agencies are leading the revolution to zero-emission transportation by taking action to replace their fossil-fuel powered buses with the very cleanest models available,” said CARB Chair, Mary D. Nichols. “The Orange County Transportation Authority is among the state’s and the nation’s leaders in this crucial effort. This project will accelerate the commercialisation of hydrogen fuel cell powered buses. It also showcases today’s hydrogen fuelling facility to keep those zero-emission buses powered up and clearing the air.”

OCTA’s project is said to align with California’s Innovative Clean Transit Rule, a first-of-its kind regulation in the U.S. that sets a goal for public transit agencies to gradually transition to 100 per cent zero-emission bus fleets by 2040. 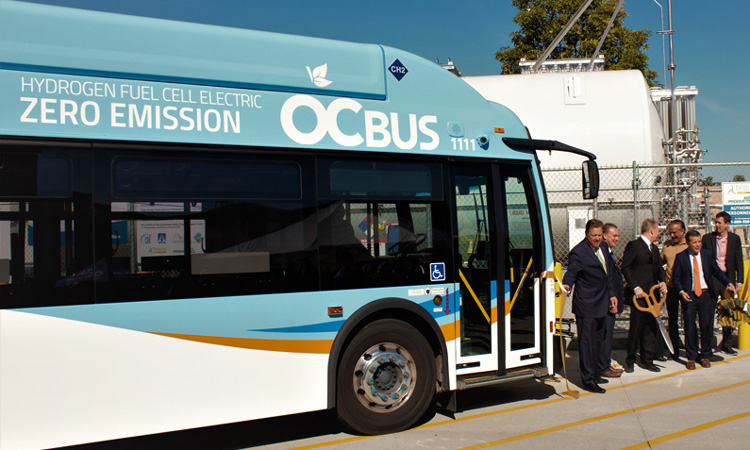 The Mayor of Madrid, José Luis Martínez-Almeida, accompanied by the delegate of the Mobility and Environment Area of ​​the Madrid City Council, Borja Carabante, has inaugurated the first zero line of the Municipal Transport Company (EMT).

The zero line – zero emissions and zero cost for users – is one of the main measures included in the new Madrid 360 Environmental Sustainability Strategy, a key tool which aims to boost the corporation’s compliance with the European directive on air quality.

To provide the service of this route, which will cover more than 350,000 kilometres per year, the EMT has planned an endowment of ten Irizar ieBUS electric buses. This model, said to be quiet and respectful to the environment, has a capacity for 75 passengers and a range of 200 to 250 kilometres depending on the driving cycle and atmospheric conditions. This figure would be equivalent to about 17 hours circulating in the city.

The Madrid bus line has a frequency of between seven and eight minutes of passage on weekdays in the time zone of greatest demand. Its schedule extends from 7:00 a.m. in both headers until 11:30 p.m. in Moncloa and 11:00 p.m. in Atocha.

During the first week of operation, EMT workers will report in the headers and along the route about the existence of the zero line with information leaflets on its operation.

The second zero line, 002, which will be inaugurated next March, will cross part of the Centro district from Argüelles to Puerta de Toledo. The service will be provided from 8:00 a.m. to 9:00 p.m. in Argüelles and until 8:45 p.m. in Puerta de Toledo, with a maximum frequency of approximately ten minutes. 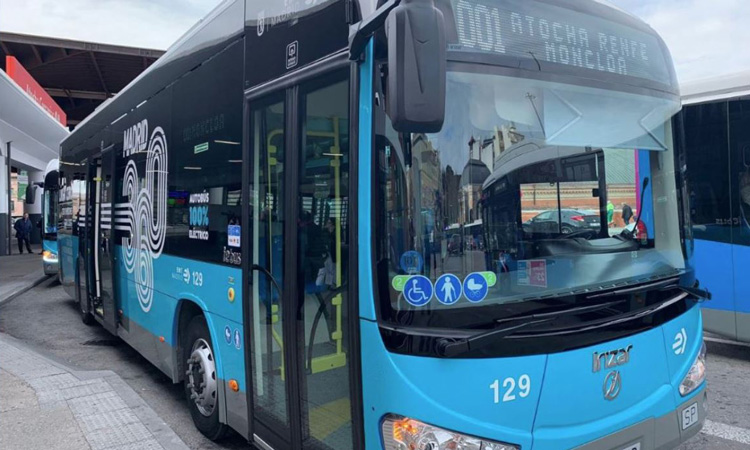