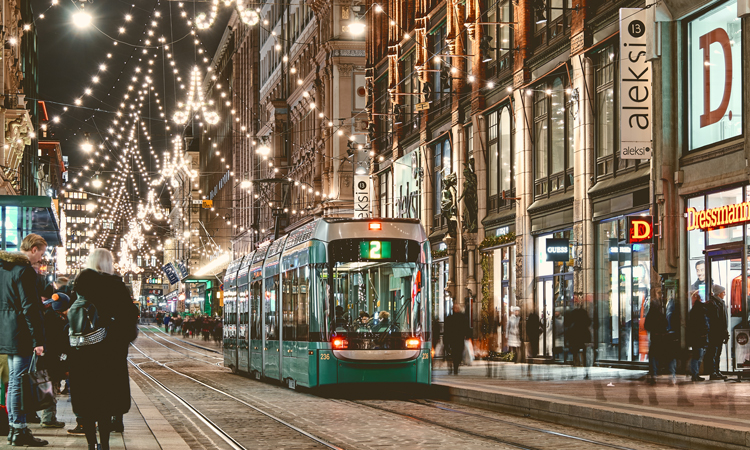 When in Helsinki – Finland’s southern capital – travelling by metro, tram or the Suomenlinna ferry, you will be using public transport managed by Helsinki City Transport (HKL).

The municipal enterprise is part of the City of Helsinki and began operating in 1945. Currently providing comprehensive and environmentally-friendly transport services both on the tram lines of the city centre and the metro lines between east and west, HKL maintains the tracks and stations in order to ensure smooth and safe transport all year round.

The metro and trams are the most environmentally-friendly forms of transport in the Helsinki Metropolitan Area, running on electricity produced by water and wind power. Alongside this, new, energy-saving vehicles for both metro and tram lines have recently been acquired.

In a bid to further reduce energy usage – and increase capacity – HKL invested in a driver advisory system (DAS). This provides a direct link between the train and the traffic management system (TMS), meaning scheduling, routing and speed restriction updates are communicated to the train in real time.

What is your role at HKL and what responsibilities come with it?

I am responsible for the traffic operations for the trams and the metro in Helsinki. This includes being in charge of both the drivers and the control centres.

My main responsibility on a day-to-day basis is to ensure that the traffic across the city runs smoothly. I also have a duty to focus on how to best develop our traffic operations in a sustainable and efficient way.

Why did HKL invest in a driver advisory system? How does it help minimise energy use?

The most attractive business case surrounding the installation of a DAS is the significant level of energy savings that is available. When considering the potential energy savings, it is possible for the payback period on the investment to be less than three years. As the energy savings alone justified the business case, we didn’t need to include these benefits in the cost/benefit calculation.

The system also offers additional benefits, like improved punctuality – by virtue of motivating drivers – and reduced wear of the rolling stock and tracks.

What kind of results have you seen since the introduction of the DAS?

Although the DAS has not been fully implemented yet and we have only received preliminary results, these have indicated that energy savings will be higher than we initially expected.

When starting the project, some drivers had reservations towards it, but as they can now see the benefits for themselves, their attitude has changed and there is a positive buzz around the system.

What other initiatives do you/the region of Helsinki have in place to ensure your operations are sustainable?

The City of Helsinki has a goal to become carbon neutral and we have an action plan with 143 separate actions to achieve this. Implementing DAS was actually not a part of this action plan – the actions listed there are higher-level actions.

Are there other cities in Finland that are focusing on being as sustainable as possible? How do these compare to Helsinki?

Yes, I guess I think it’s quite common now to focus on sustainability and many cities have set a target year for becoming carbon neutral. Some Finnish cities are more ambitious than Helsinki, for example in Tampere the target year is 2030, whereas Helsinki is aiming to achieve carbon neutrality by 2035. However, we are aiming to reduce our greenhouse gas emissions by 60 per cent by 2030.

Arttu Kuukankorpi is the Director of Traffic Operations at Helsinki City Transport. He is responsible for the traffic operations of the trams and the metro in Helsinki, Finland. Previously he has held different positions at Helsinki City Transport and Helsinki Region Transport and he has been in charge of several changes in the public transport route network in the Helsinki region, which have lead into rapid increase in public transport ridership. He holds an M.Sc. (Tech.) from Helsinki University of Technology.