LATAM electric bus market is strong, but may fail to reach its potential

There is currently a positive outlook globally regarding the uptake of electric buses. However, as Rueben Scriven, Technology Analyst at Interact Analysis, explains, there are several challenges which could restrict the extent to which electric buses penetrate the market. 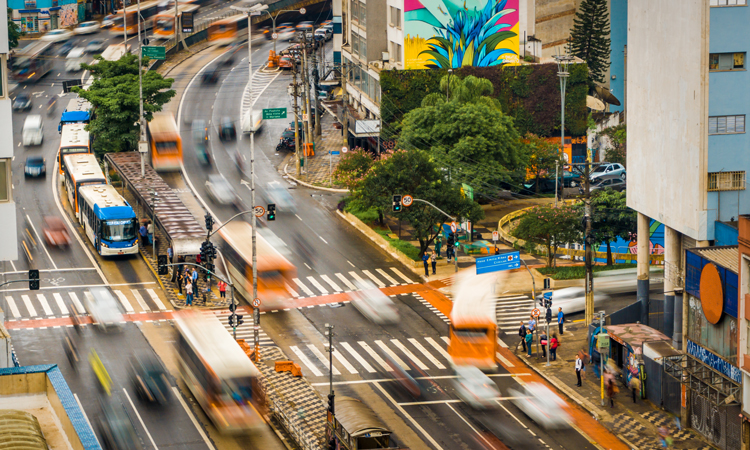 Bus rapid transit (BRT) systems are the dominant form of public transportation in many of the major cities across Latin America. Latin American BRT systems carry, on average, nearly 1,300 per cent more passengers than European ones do, despite having just 20 per cent more BRT systems. Such a strong dependence on this mode of transport means that a significant portion of tailpipe emissions come from transit buses.

In 2010, an estimated 64,000 people died prematurely in Latin America due to particulate matter and NOx emissions. It’s no surprise therefore that electric buses have been recognised by several cities across Latin America as a way to help reduce the health problems associated with air pollution. In 2018, 271 electric buses were delivered in Latin America; 73 per cent of which were delivered to Santiago which now boasts the largest electric bus fleet outside of China, and the market is forecast to grow significantly. Interact Analysis forecast that by 2025, over 5,000 electrified buses will be delivered annually (see figure 1); the majority of which will come from China.

Chinese bus OEMs, which can sell battery electric buses at a low cost because of the scale which they’ve achieved in China, have been dominating supply in Latin America so far (see table 1). BYD currently has the largest market share in Latin America and has a presence in five out of the eight cities which operate electric buses. Following an order of 100 electric buses from Chile in 2018, Yutong has also gained a significant share of the Latin American market. 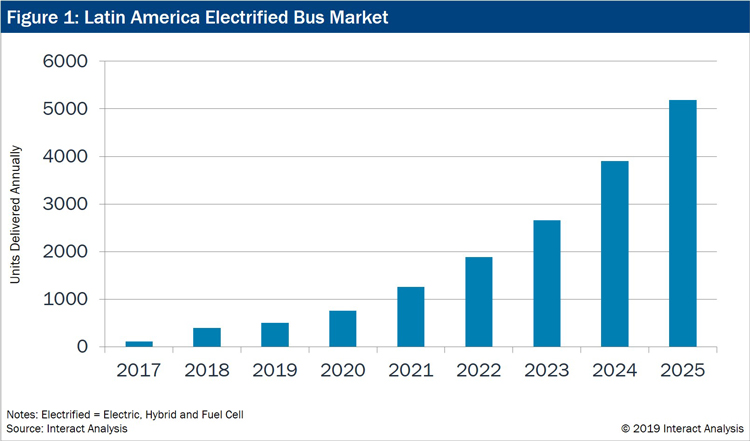 Despite the positive outlook, there’s several key barriers which could limit the extent to which electric buses penetrate the market.

The biggest barrier preventing widespread adoption is the up-front cost of electric buses. Latin American markets are highly cost sensitive; a common feature across emerging markets. As opposed to China and India which both have well defined federal subsidy schemes to promote the uptake of electric buses, Latin American countries have been less clear on the available financial support and subsidies tend to be given on an ad hoc basis.

China and India, which are forecast to be the two largest markets for electric buses in 2025, both see electric buses as strategic industries. China is looking to dominate the global electric vehicle supply chain and India is actively trying to reduce its dependency on imported oil which has been a burden on its economy in recent years. Latin American countries, on the other hand, have less of a strategic interest in electric buses which reduces the incentive to provide aggressive subsidy programmes.

Even though electric buses have less of a strategic importance in Latin America, the combat against pollution and tailpipe emissions will still be a significant driver for the procurement of cleaner buses. Many of the buses in Latin America, however, are well below the Euro VI standard which means that municipalities can significantly reduce their fleet’s tailpipe emissions without the need to pay the premium for hybrid or electric buses. When Bogota floated tenders in 2018 to renew its fleet of 1,160 buses, it chose diesel buses despite significant pressure by various sectors to go electric, stating that the increase from Euro II/III to Euro V will still reduce particulate matter by 80 per cent.

Although economic activity has continued to grow in Latin America, growth has been slower than expected, according to the IMF. This has partly been attributed to policy uncertainty following the recent elections in some of the larger economies such as Brazil and Mexico. Furthermore, higher U.S. interest rates and a stronger U.S. dollar will have a negative effect on the Latin American countries with large amounts of dollar denominated debt. As economic growth in Latin America slows down, the willingness to invest in electric buses which have lengthy returns on investment will be dampened. 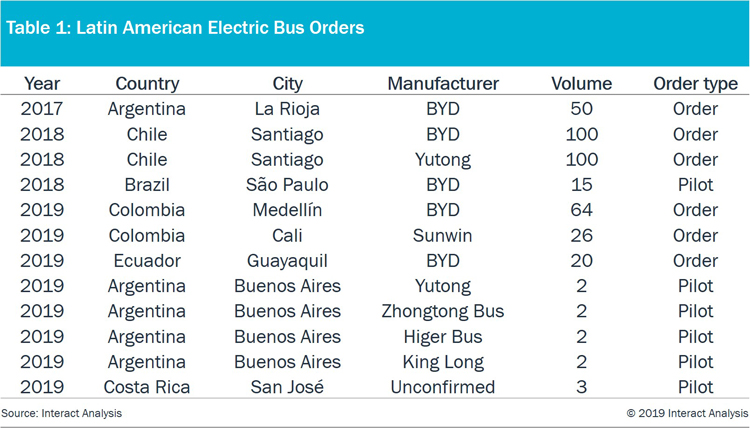 Government subsidies will be the most critical component for the success of electric buses in Latin America. Well defined subsidy programmes will not only increase the attractiveness of electric buses but will signal the government’s position towards them. Uncertainty surrounding subsidies often leads to a negative impact on the market; a phenomena which India is currently experiencing. A number of countries have reduced or eliminated import tariffs on electric buses, but tax exemptions alone won’t be enough to spur the market in the short to mid-term given the cost sensitivity of the market.

The Zero-Emission Bus Rapid Deployment Accelerator (ZEBRA) will help to promote growth. An arm of C40 cities, ZEBRA is working with a number of municipalities in Latin America including Mexico City, Medellín and São Paulo to secure $1 billion for the transition to zero emission buses.

Partnerships between transport authorities and utilities will be pivotal in overcoming many of the barriers which are currently limiting uptake. The partnership between Enel, an Italian utilities company with a strong presence in Latin America, and BYD which together supplied 100 electric buses to the capital of Chile confirms this notion. Enel handled the engineering and construction projects and supplied the charging infrastructure, while BYD supplied the buses.

Electric buses require an up-front premium but often save money in the long run due to operational savings. In Europe or North America, where municipalities often have larger budgets, the decision to choose electric buses from a financial perspective is more easily justifiable. Lower budgets and higher levels of cost sensitivity in Latin America will make the decision harder to justify. Alternative business models which address the up-front cost of the vehicles should therefore be considered.

Using an OPEX-based operating model whereby the buses are leased on a per kilometre basis eliminates the up-front cost associated with electric buses. This operating model is common place in India which has seen significant growth in its electric bus market over the past 12 months. Alternatively, battery leasing schemes can be used which are often provided in North America and Europe.

2018 was a pivotal year for the Latin American electric bus market and we expect to see the number of orders grow significantly throughout the coming years. That being said, a number of key barriers could prevent the market from reaching its full potential. Once these barriers have been addressed, Latin America has the potential to gain a significant share of the global electric bus market and become a leader in zero-emission public transportation.

Rueben Scriven graduated from Durham University with a first-class degree in Biochemistry, and is now leveraging his background in science and computer modelling by joining the transportation research team focusing on commercial vehicle electrification. As a Technology Analyst for Interact Analysis he is currently responsible for the research into the hybrid and electric truck and bus industry with a particular focus on the European and North American markets.