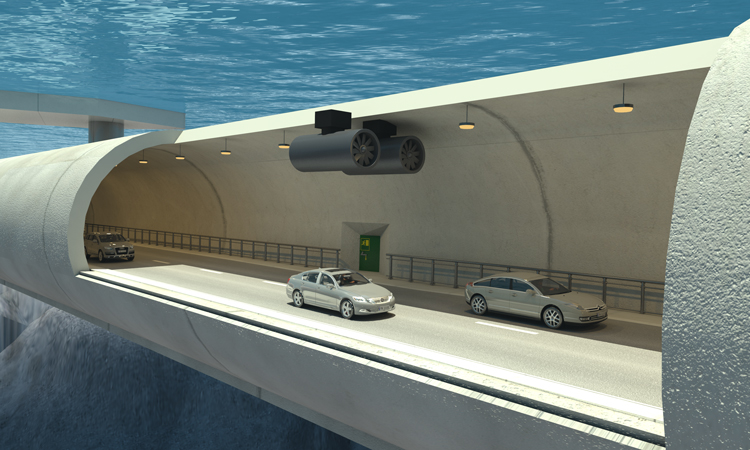 The rugged west coast of Norway, home to thousands, is a challenge to travel along by car. It takes time. A long time. The harsh weather conditions make it an unpredictable route, with roads often closing and ferries often cancelling their departure due to snow, heavy winds or high waves. A continuous E39 highway that is accessible 24/7, with fixed links between islands and the mainland will make the western coast more accessible for people who inhabit the coast, but also for tourists and for the transportation of goods.

Currently, 1,000km of road need to be improved 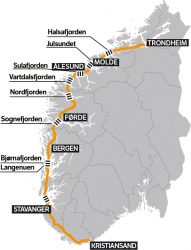 The Norwegian parliament (Stortinget) has a long-term goal to develop the E39 as an improved and continuous Coastal Highway Route between the cities of Kristiansand in the south and Trondheim in the north by 2050.

The Norwegian Public Roads Administration is the contractor for this project. The route runs through six counties and the cities of Stavanger, Bergen, Ålesund and Molde. Currently the total travel time is approximately 21 hours and road users have to use seven different ferry connections.

The aim is to create an improved E39 without ferries; reducing the travel time by half, with the route almost 50km shorter. The reduction in travel time will be obtained by replacing ferries with bridges and tunnels, in addition to upgrading a number of road sections on land. Sixty per cent of Norway’s export goods are produced on the west coast, so an efficient and predictable transport system will be a great benefit for the national economy. By connecting cities along the west coast we will also create new patterns of habitation. The new road will shorten the path to reach hospitals, jobs and schools. The E39 continues to Denmark, and hence connects Norway with southern Europe. Preliminary estimates show that the required investments and improvements will cost approximately NOK 340 billion. 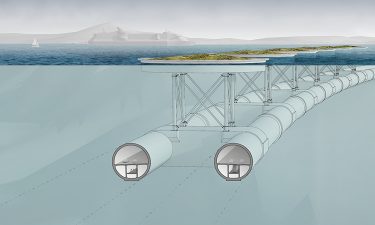 To replace today’s seven ferries we are planning to build alternative constructions, either bridges or tunnels. We are considering a new type of structure, a Submerged Floating Tube Bridge (SFTB) for some of the deepest and longest fjords exposed to harsh weather conditions, where suspension bridges or floating bridges will be difficult to build.

When a fjord is deeper than 100m or wider than two to three kilometres, existing engineering solutions aren’t applicable. The seabed would be too deep for a traditional rock tunnel because it will imply the use of a huge amount of land on the shores. Floating bridges and other type of bridges on tension leg platforms (TLP), even if they are suitable for deep crossings, are susceptible to harsh weather conditions such as strong waves and currents. This is why the SFTB has become an attractive solution for some of the longest and deepest fjords – its submergence can naturally reduce the main sea load.

The tube would be placed underwater, deep enough to avoid water traffic and reduce the main sea load, but not so deep that high water pressure needs to be dealt with – usually 20-50m (60-150ft) is sufficient. Tethers anchored to the seabed or pontoons floating at the surface would provide the vertical stability.

We are performing tests to see what the driver experience will be, and of course, safety is our first priority whenever we plan any type of transport construction. We are planning scale tests for fires and explosions, considering the possibility of having a truck carrying dangerous goods exploding inside the tunnel. Another risk is of course ship collisions or submarine collisions, as the fjords are a training field for the Norwegian navy.

The submerged floating tube bridge is certainly an engineering marvel, but the idea isn’t new. The first known proposal was in 1886 by UK naval architect Sir James Edward Reed. In Norway the idea was studied since 1923 and, since the studies have been performed by the Norwegian Public Road Administration for the E39, we know that other countries are considering building the same type of structure. We are in dialogue with several of them, so it is more of a collaboration than a competition, but it will be exciting to see who the first country will be to build this structure. We are still evaluating some fjords the SFTB might be relevant for, and some of them are among the longest and deepest.

Research is necessary for the future transport system

The Coastal Highway Route project collaborates with three of the largest universities in the Nordic region (The Norwegian University of Science and Technology, The University of Stavanger and Chalmers University of Technology), and has about 50 PhD-candidates working on solving different engineering challenges related to the E39 project.

It is clear that a lot of the on-going research is of interest not only for the E39 Coastal Highway Route, but for the road system worldwide. We are working hard to disseminate the results of our research so that every part of the work we are doing can contribute to international knowledge and not be wasted.

Some of the research topics in the E39-project include:

Arianna Minoretti graduated at Politecnico di Milano, in Structural Engineering. She is now the Chief Engineer at the Norwegian Public Roads Administration, department of bridges and is responsible for the studies on the Submerged Floating Tube Bridge. 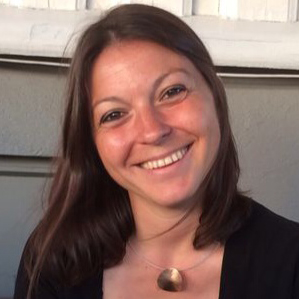