‘SMART-WAY’ – guiding you through the transport jungle

Andreas Küster – Group Leader for Traffic Information and Management at the Franhofer Institute for Transport and Infrastructure Systems IVI – describes the intention, the realisation and the implementation of the ‘SMART-WAY’ public transport turn-by-turn navigation technology and its further developments in context with car-navigation, electronic ticketing and car-sharing approaches. 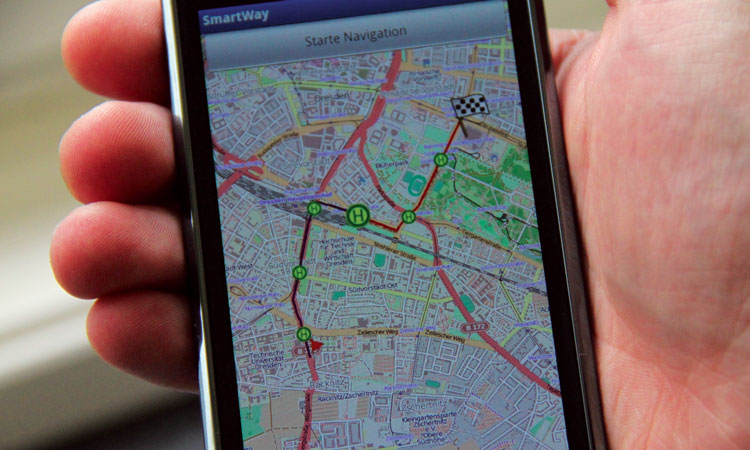 The overall objective of the SMART-WAY project was to develop a real public transport navigation system for the use in mobile devices, allowing passengers to act as they are used to do with common navigation systems in cars. This objective has been achieved, as the project has brought about a ready-to-market application which can be introduced to public transport companies and other interested customers.

The technology itself was developed and granted within the FP-7 project SMART-WAY1 (Galileo-based navigation in public transport systems with passenger interaction) under the Seventh Framework Programme of the European Commission. As Coordinator, the Fraunhofer Institute for Transportation and Infrastructure Systems was supported by partners from five Member States of the European Commission.

The main objectives of SMART-WAY can be divided into three levels: a technical one, an application level, and the dissemination level. All project activities result from this structure and were necessary to verify the main objectives.

To fulfil the described expectations, SMART-WAY orientated itself on existing navigation technologies for private road users.

Private car navigation has reached a high market penetration in recent years. It can be assumed that most public transport passengers at least know or already use this technology in their private cars, or have come into contact with it. To benefit from the success of the individual traffic navigation devices, the users of public transport navigation should be offered comparable functions and an equivalent handling. Features and implementation of SMART-WAY are orientated towards car navigation systems. For example, if a car driver leaves the planned route accidentally or deliberately because of a wrong turn, then the navigation system always calculates a new route to the destination from the current position. This ensures that the driver can still reach the final point of their tour in every situation.

SMART-WAY works similarly. For example, if a public transport passenger accidentally enters the wrong bus, or they leave the tram spontaneously for a short detour to an ATM, this will be recognised by the system and they will dynamically get a new route and timetable information to the destination.

The localisation of passengers is realised with GPS, as it is the currently available positioning system and has a very accurate functioning. In the future, Galileo can also be used and due to its high quality, a considerable improvement in locating can be achieved.

Before a car enters a traffic jam, modern car navigation devices can provide this information via TMC and are able to offer an alternative route. If a disturbance occurs in the public transport network, the passenger using SMART-WAY will also be informed and SMART-WAY will examine whether or not there is another, faster connection available for the customer, so that the destination can be reached with only minimal delay.

The quality of the SMART-WAY navigation solution depends on the implemented algorithms and on the available data. In addition to the GNSS locating information, the system requires the current transport system scheduling. In most existing mobile information systems, only planned schedules, as those the customer may see published at the stops, are available. For a reliable and precise navigation, the accuracy of this static type of data is not sufficient. In case of delays or early departures compared to the planned timetable information, the calculated journey will longer apply. Exactly in those situations, SMART-WAY steps in. In order to do so, it is necessary that the passenger navigation system receives the real-time based information, especial predicted arrival- and departure-times for all vehicles at any stops of the network from the computer operating system of the transport operator.

Existing, real-time based timetable information systems, which instantly provide data via standardised interfaces, can be linked following the system architecture of SMART-WAY. Once the mobile application recognises deviations from the originally planned trip, the server-based background applications will be inquired. It will be checked whether or not the observed deviation between the predicted position and the real position mobile device is caused by the current traffic situation. Subsequently, the system will determine if the position of the currently used vehicle is the same as the GNSS localisation of the passenger. If the data does not match, it can be assumed that the customer is no longer on-board the vehicle. If the vehicle position shows temporal variation itself, the system checks immediately whether all the calculated trip connections will still work or if a better connection is available. If changes concerning the original route or the time of arrival have occurred, the passenger will be informed immediately. This ‘re-routing’ procedure follows the principles of car navigation systems and extends them of the necessities of the public transport, like the change of the transport vehicle.

If real-time based predictions by the transport operator are not available, SMART-WAY will even be able to run and create own predictions based on passenger mobile device created real-time data.

To meet the innovative nature of a research project, SMART-WAY has been based on up-to-date technologies.

In preparation of the proposal, the SMART-WAY consortium has examined various positioning technologies. GNSS localisation has been established in that process as the most adequate one. Costs for localisation are low compared to other active technologies (e.g. cell localisation in mobile networks) and GNSS components are already fitted in a lot of mobile devices. The most widely used version of GNSS is currently GPS.

However, GPS is limited under various circumstances. In some situations, for instance in heavily shaded areas, GPS may be inaccurate. In buildings and in vehicles, the coverage of the satellite signal often fails completely. Once Galileo will be completely implemented, it can be used in addition to GPS as an innovative localisation base for the system. The stronger coding and the technologies in transmission the signals will allow the navigation system to localise more accurately, even in shaded areas and vehicles. This is particularly due to the higher number of satellites to be used. Moreover, if the satellite coverage will fail for Galileo, there is the possibility of using so called ‘pseudolites’2, static positioned GNSS transmitter, which could replace real satellites in those areas.

For the data transmission between mobile devices and the backend system, SMART-WAY identified 3rd generation networks like UMTS (3G network) being adequate:

Anyway, SMART-WAY is developed to fall back to slower communication networks like Edge and GPRS if UMTS is not available. In that case, some features of SMART-WAY like online maps will be temporarily pausing.

In addition to the described project result, several additional components, which contribute to the overall system functionality, are essential for SMART-WAY. The technical innovations of the ‘Management Terminal’, responsible to keep data up-to-date, the ‘PrepDesk’ for processing spatial data and the services for ‘MapMatching’ and ‘StateEstimation’ of passengers for the improvement of locating precision are described in the referring project deliverables. One proof of the innovation grade is the ‘2012 German High Tech Champions Award’3 for sustainable transportation.

Even, if SMART-WAY as a technology is able to run within a standalone product as demonstrated in Dresden and Turin, the full potential is unfolded in combination with existing or future services. This also opens public transport operators the possibility to address potential passengers, without additional investments. Some examples include:

These are for sure just a few examples, how the technology lowers the barrier to use public transport systems and establish a travel comfort, as known so far just from car navigation systems. There are also some open fields of research, like the universal access to public transport data without giving the responsibility of them out of the hands of the transport operators and keep the relation to the customers close.

After university graduation in transportation information technology and engineering, Andreas Küster has been employed at the Frauhofer-Gesellschaft since 1997, first as Junior Scientist, then in 2000 as Senior Scientist and Project Manager and then in 2011 as Group Leader. He leads the competence field ‘Traffic Information and Management’ at the Fraunhofer Institute for Transportation and Infrastructure Systems IVI. His work includes research regarding stationary, mobile intermodal traffic information systems and he is an expert in public traffic information systems and computerised traffic management systems. 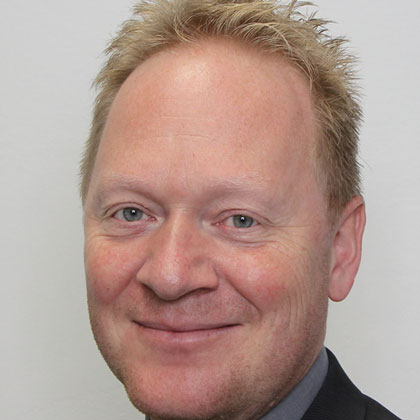