The majority of automated fare collection (AFC) systems which have been introduced worldwide have implemented a CICO (check-in/check-out) system. Public transport users check-in and check-out at the beginning and end of their trip so that the system records the service which has been utilised. This is independent of the type of fare product used. Even if the customer has opted for a flat pricing scheme, most AFC systems make a check-in and check-out procedure mandatory. In contrast to this development, most AFC systems in Germany have so far replaced paper-based tickets with smartcards, without introducing a CICO process1. 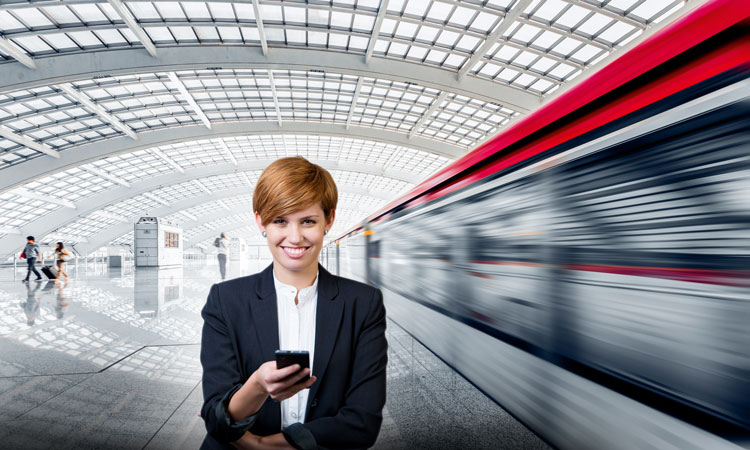 For example, in the service area of the Rhein-Main-Verkehrsverbund (Rhein‑Main regional transport association) the majority of paper-based season ticket types have been replaced by smartcards. These systems cannot record the service utilised by the user and there is lack of options for automated price calculations. Therefore they don’t alleviate the user from studying the fare system and choosing the right ticket type and value. Currently, only a few systems in Germany incorporate a CICO process, for example the Kreisverkehr Schwäbisch Hall transport association2, the Stadtwerke Münster or ‘Touch&Travel’ in the service area of the Rhein-Main-Verkehrsverbund.

Next evolution AFC system based on smartphones

The main objective for upgrading existing AFC systems to record the utilised service includes the increased comfort for public transport users by offering an automated price calculation. This should be achieved not simply by applying a CICO process, but a BIBO-like (be-in/be-out) system, eliminating most of the user interaction that takes place when checking-in and out in a CICO system. Until now there have been no AFC systems based on a BIBO process in productive use, but they are considered as a perfect fit for open access interconnected public transportation systems such as those in Germany.

The smartphone is ubiquitous today and an essential companion in a world which is becoming more and more complex for the individual. The smartphone penetrates various areas of daily life. It serves not only as a device for communication, but also as a ‘life organiser’ and a source for information and entertainment.

Another important point is increased price discrimination options when recording the utilised service. The usage volume can be used much easier as a factor in influencing the price. In addition for example, when combined with an account system, the utilised service is balanced against a post‑paid option. The public transport user is registered and addressable for customer relationship programmes.

The (((eSIM 2020 project has been initiated in order to verify the technical feasibility of a BIBO-like AFC system based on smartphones available on the market. The project, which began in 2013, consists of three main phases starting with the system design and specification. Most important in this phase is the design of an in-vehicle monitoring system that is capable of recording the service utilised by the customer. In order to keep system costs low, the aim is to use a wireless LAN system for monitoring the presence of a customer. Therefore, in (((eSIM 2020 the user medium is a smartphone with a WLAN interface which nowadays is a standard component in smartphones.

The developed on-board WLAN system and its characteristic signal propagation pattern will provide the necessary information for the smartphone to record in which public transport vehicle and which trip sections it has travelled along. The data processing and handling on the smartphone will be completed by a smartphone app which is the important counter part of the on-board WLAN system. Both components form the in-vehicle monitoring system.

The second phase focuses on the manufacturing of components, the preparation of vehicle installation kits and system integration tests. Starting with the second phase, strategies are developed for system integration into existing AFC systems which do not record the utilised service so far. In addition the compatibility with the (((eTicketing standard provided by VDV eTicket Service will be examined and necessary changes to the standard proposed.

In the last phase of the project, the developed in-vehicle monitoring system is put to a live test with 250 users. The precision and robustness of the system is tested thoroughly in a real public transport environment. This field test is scheduled for 2016.

In order to increase the perception as an attractive transport mode, public transport needs to address the user demand for flexible mobility services. Today, people show a much more flexible travel mode choice behaviour. Often, the complete set of available modes of transportation are considered and depending on the individual trip characteristic the preferred mode is chosen. This leads to a multi-mode behaviour which creates the opportunity to attract people using public transport. In order to be regarded as a flexible and convenient mode, various people expect their needs to be addressed. Among others, these needs include detailed scheduling and on-time information, assistance during a journey and an easy to use ticketing system. The latter will be addressed by the (((eSIM 2020 project which aims to provide an unprecedented convenience for the user when it comes to ticketing.

The most pressing user needs which will be addressed in the (((eSIM 2020 project can be based on the following statements:

“I’ve got enough things to care about in my daily life. I don’t want to fight with a complicated app. The (((eSIM 2020 app is really easy, just push the button and off you go. And at the end of the month I get conveniently charged via direct debit.”

Being spontaneous and flexible

“If I want to take a journey outside the coverage of my season ticket, the (((eSIM 2020 app can handle this seamlessly. So I’m on the safe side and don’t accidently dodge the fare.”

“It’s just great for my occasional errands. Just start the (((eSIM 2020 app and off you go. Sometimes I get off the line from the mall before my home because my friend spontaneously invites me to a coffee nearby. (((eSIM 2020 is as flexible as I am.”

“As a tourist I quickly download the app, sign-in and just start my sightseeing trip. At the end of my journey I pay via credit card.”

The (((eSIM 2020 project is expected to break ground for a BIBO-like AFC system utilising the smartphone as the user medium. The system should be gradually rolled-out within existing AFC systems, which so far replace paper-based tickets with electronic tickets, but do not yet record the service utilised by the public transport user. The system will be designed so that in a later phase it could be enhanced to accept smartcards as a user medium as well.

The project is put forward by stakeholders from different areas. It bundles and further increases the knowhow about BIBO systems within Germany. Once completed successfully it is intended to further develop the AFC system components into a productive system and put it into operation within the Rhein‑Main-Verkehrsverbund in Germany.

Matthias Wirtz graduated from the Faculty of Civil Engineering at the Karlsruhe Institute of Technology (KIT) in 2000. He worked as a public transport professional in Germany as well as in the USA. From 2007 until 2012, Matthias was Research Assistant at the Institute for Transport Studies at the Karlsruhe Institute of Technology (KIT) focusing on mobility behaviour research, modelling transport, and the impact of AFC systems on travel behaviour. In 2013 Matthias joined the Rhein-Main-Verkehrsverbund Servicegesellschaft mbH (rms) as a Senior Consultant and is Project Manager of the (((eSIM 2020 project.

Philipp Wolf graduated from the Institute of Sociology at the University of Marburg in 2010. From 2011 until 2013, he was employed as a qualitative research consultant with a focus on logistics and finance studies at an internationally operating market research company. In 2013 Philipp joined the Rhein-Main-Verkehrsverbund Servicegesellschaft mbH (rms) as a Junior Consultant and is Project staff Member of the (((eSIM 2020 project.