Speed, simplicity, flexibility and interoperability. When STIB – the Brussels Inter-municipal Transport Company – launched its ‘MOBIB’ smart travel card six years ago, it was making a firm decision to focus on the future of travel tickets. Erik Baele and Henri Devreux from the STIB, and both involved in organising the launch of the MOBIB card, explain that innovation in ticketing is still a priority for the transport provider, with the installation of the latest generation of MOBIB card validators. 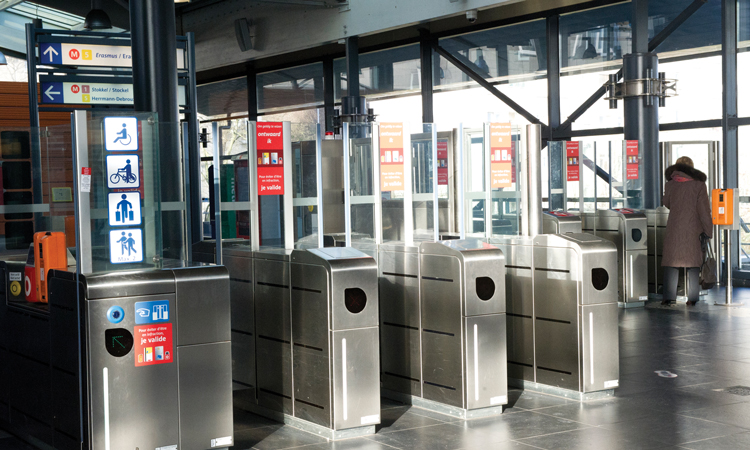 Until the mid-2000s, the STIB, which manages four metro lines, 19 tram lines, 50 bus lines and 11 night bus lines in the capital, was using magnetic tickets, together with ‘paper’ travel tickets for monthly and annual subscriptions.

The card of the future

From the very start, the MOBIB smartcard’s aim was to be a travel ticket that was easier to use for both travellers and for the public transport company, and above all for it to be inter-modal and ‘inter-operator’ and able in the future to integrate new functionalities (i.e. a virtual wallet, near field communication (NFC) etc.).

The MOBIB card was introduced in 2008 and validators (card readers) were progressively installed throughout the STIB’s bus, tram, metro and station network, alongside the readers for magnetic tickets which are still issued.

The MOBIB card operates with Calypso technology, i.e. the same standard for all users. Calypso technology originated in France (Calypso Network Association) and is used in countries including France, Portugal, Italy, Switzerland and Belgium, as well as in South America, Canada, the United States, Mexico, Northern Africa and Israel.

The specifications of the technology were drawn up by the Belgian Mobility Card (BMC) company using technical references which the systems of the public transport operators using the card must comply with. This applies to the cards themselves, the card readers, the Security Access Module (SAM) and the associated sales, validation and checking processes. It also covers exchanges between the different operators through the central system.

Each operator remains responsible for issuing its own cards and installing its own reading and validation system within its network. BMC certifies the cards and systems, to guarantee complete interoperability between the four public transport networks in Belgium: STIB (Brussels), SNCB (rail network), TEC (Wallonia) and De Lijn (Flanders).

In concrete terms, the cards have a microprocessor chip and a radio antenna. They are validated by being placed in the validation zone. They can also be ‘topped-up’ remotely during validation.

Simplicity and time savings for both travellers and the transport operator

In 2013, the STIB provided 354.8 million journeys (six million more than in 2012) and has registered a 61% increase in the use of public transport in Brussels over a 10-year period. This trend is set to continue and the company expects to carry 415 million passengers in 2017 and as much as 550 million by 2025. The STIB has therefore launched a number of wide-ranging projects including the procurement of new vehicles, construction of new tram and metro lines, plus establishing metro automation, to increase its transport capacity by 20% by 2017 and 60% by 2022.

In the context of these investments and developments, the MOBIB card represents an undeniable advantage for both passengers and the transport operator.

The cards can be used to top-up several different travel tickets using the same device. They can be topped-up remotely, via the Internet, and have led to a considerable increase in the number of sales outlets. Subscriptions, for example, were previously only issued in five sales offices, resulting in very long queues, particularly at the start of the school year, but can now be renewed in more than 570 sales outlets.

The cards are also much sturdier than magnetic tickets, which is an important factor today with the installation of gates at station entrances and exits. They also provide the transport operator with more information on passenger flows, such as journeys taken and times. This gives the operator a real idea of the traffic on the network.

Interoperability was the basis of the MOBIB project; interoperability with the rail network (SNCB), with the other two Belgian public transport companies (TEC and De Lijn) and with other transport-related companies (i.e. car sharing and bicycle rental). This simplifies the process for users, who no longer need to combine several different systems for the different operators.

In 2011/2012, the STIB began to offer its MOBIB cards to the Belgian National Railway Company (SNCB), so that it could load joint SNCB and STIB contracts. Then, in early-2013, the SNCB launched its own MOBIB card, which is compatible with the STIB card for all subscribers.

The Flemish public transport company De Lijn began by installing validators in its vehicles and will soon equip its sales outlets. The company has started to distribute its MOBIB card to people with senior citizen subscriptions as well as free travel passes to its employees. It will focus on its other clients in early-2015 and full interoperability should be achieved by mid-2015.

The Walloon public transport company (TEC) began by activating smartcards for the free travel passes issued to its employees. It has been distributing its chip card to clients since July 2014, but they can currently only be used for annual subscriptions. Here too, full interoperability should be achieved by mid-2015.

The TEC and De Lijn cards can currently be topped-up with certain STIB travel tickets, on a test basis.

Interoperability also applies to other businesses closely or loosely linked to the transport sector, such as the car park company Interparking, VILLO bicycle rental and the car sharing system Cambio.

A number of projects for the future

There are plenty of projects lined up for the future. The STIB is currently replacing the first generation of MOBIB validators with a new generation. This new generation is higher-performing; it is faster, which is an advantage in terms of passenger flows, and also allows more functionalities, as the system can read barcodes or QR codes, is EMV-compatible and also has the NFC functionality which will eventually allow travellers with a virtual travel ticket on their smartphone to validate it by placing their phone in front of the device.

It may also become possible to load money onto the card, as a kind of virtual transport ‘wallet’ which could be used for any transport-related purchases in Belgium.

In conclusion, the MOBIB smartcard opens the door to an infinite number of technical possibilities and applications in the future, which will facilitate the life of both public transport companies and their passengers.

Henri Devreux is Sales Director in the Sales, Marketing and Network Department of the STIB. He joined the STIB in 2007 having spent 17 years working in large-scale distribution. When he joined the STIB, Henri was responsible for organising the launch of the MOBIB card.

Erik Baele works within the Transport Systems Department of the STIB and has been General Manager of the Belgian Mobility Card (BMC) since 2013. He joined the STIB as an Industrial Engineer during the 1980s and was also responsible for the first on-board computers and for magnetic ticketing. In 2005, Erik was involved in the launch of the MOBIB project at the STIB.