Road safety is fundamental to all bus operations in Arriva Denmark and the absolute top priority for every single employee, writes Anders Lukowski – Strategy Implementation Manager at Arriva Denmark. Arriva is constantly looking for new ways to improve road safety and has throughout the last couple of years developed a number of ground-breaking processes that are making public transport safer. 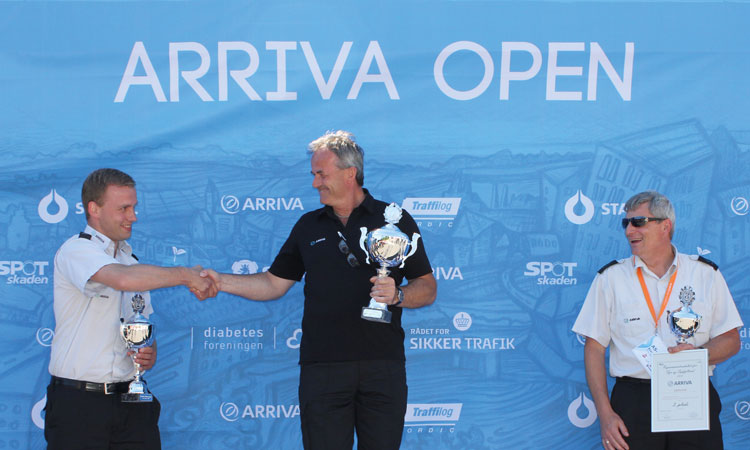 To ensure that Arriva is always well prepared when it comes to road safety, bus drivers are included in the development of new processes as they are the experts on road safety and hold valuable knowledge of the risks and dangers of road traffic.

A good example is Arriva’s ‘Spot the Damage’ campaign where the aim is to reduce the number of damages to Arriva buses – and thereby the number of traffic accidents.

Bus drivers have pointed out the routes and places where accidents are most likely to happen. Based on this insight, solutions to how the accidents can be avoided have been identified and campaign material such as flyers, posters and videos have been developed. Thus, the drivers can learn from each other’s experiences and share valuable knowledge in terms of how to improve road safety across the country.

To help the bus drivers become even better at offering Arriva’s passengers the best travel experience, all buses are equipped with a ‘Traffilog telematic system’. This system measures the G-force which passengers are subjected to when the bus accelerates, brakes or goes through a curve.

The system gives real-time feedback to the driver by flashing a yellow, orange or red light, telling the driver that he or she has pushed the bus beyond its boundaries. This helps the driver to avoid making the same mistake in similar situations. Based on this data, Arriva has developed a unique and holistic concept called ‘GreenBox’. All 3,300 bus drivers in Arriva receive monthly reports with information about where and when they have caused the system to react throughout the past month.

GreenBox is connected to a concept called ‘ECO coaching’ where drivers are advised on eco-friendly – and passenger-friendly – driving through personal instruction by one of Arriva’s more than 40 ‘ECO Coaches’. After the coaching session, the drivers receive personal weekly reports comprising the past week’s incidents where they have accelerated too fast, hit the brakes too hard or gone through a curve too fast. The report also shows fuel consumption benchmarked on other drivers on similar routes and time schedules.

Data from GreenBox is – in accordance with union representatives – used for weekly top lists showing the top third of the drivers with the fewest incidents. The top lists are posted on bulletin boards for all to see, and the best performing driver is rewarded with a small token of appreciation – typically tickets to the cinema.

Drivers with the most incidents are not featured, but are instead invited to join a special programme where they are given personal feedback on their driving for five weeks. The drivers who achieve the largest reductions in the number of incidents receive personal letters with recognition of their efforts and a report showing their improvement.

To support the GreenBox initiative, Arriva has launched a series of competitions to make safe driving more fun for the bus drivers.

“We often use nudging techniques in our communication towards our bus drivers by addressing safety related issues through games, self-tests and competitions. For example, we have created a board game – a shuffle board – to address the dangers of icy roads, and our own national championship ‘Arriva Open’, where we crown the best eco-driver in all of Arriva Denmark,” explains Jonas Billekop Heinrichs who is Business Excellence Developer at Arriva Denmark and has been responsible for arranging Arriva Open the last four years.

Besides the advantages on road safety, the GreenBox initiative has a huge influence on the consumption of fuel.

In 2014 Arriva saved a total of 1.2 million litres of diesel compared to the year before, which not only meant big economical savings for Arriva, but also saved the environment from more than 3,000 tonnes of CO2.

“It is of great importance to us that we use less fuel,” says Bus Director Torben Hansen at Arriva Denmark. “Fuel is one of our largest expenses, and therefore it is of course incredibly gratifying that our bus drivers have managed to decrease the consumption. We also have a sincere desire to contribute to a greener public transport. Thus, limiting our emission, gives us twice the satisfaction.”

When it comes to road safety, Arriva does not just focus on how to decrease the number of accidents. They have also engaged in a partnership with the Danish Road Safety Council in order to develop a road safety policy, specifically for Arriva.

The goal is to decrease the number of work-related traffic accidents. The work is ongoing but has already proven valuable to both parties and resulted in a pilot to a national campaign on work-related road safety.

In 2014 Arriva also focused on accidents occurring when bus passengers step on to the bike paths as they leave the bus. A bus driver made the Arriva management aware of the seriousness of this problem, which led to an internal survey indicating that 40% of Arriva’s city bus drivers had witnessed passengers being hit by cyclists during the past year.

To address this problem Arriva initiated an awareness campaign during the first three weeks of August 2014, based on a historical joint venture between themselves, the Danish Cyclists Federation, the Police and all the national Public Transport Associations. The campaign generated massive media attention and the message was spread on media outlets such as broadcast, radio stations and daily newspapers.

“Road safety is one of the cornerstones in public transportation, which is why we have chosen to take the lead on new solutions which can increase the safety on our roads, improve customer experience, and decrease the environmental effects plus at the same time increase employee satisfaction. So far, we have been successful and we will continue our efforts so that it remains an obvious choice to ride the bus in Denmark and to work for Arriva,” says Arriva Denmark CEO Nikolaj Wendelboe.

Arriva has a very clear safety performance strategy that serves as a guideline, as well as encouragement, to increase road safety. Arriva’s overall goal is to reduce the number of accidents resulting in material damage and/or personal injury by 50% from 2013 to 2017.

The European Transport Safety Council (ETSC) awarded Arriva Denmark the winner of the Praise Award 2014, an award which is given to companies and public authorities across Europe who do a special effort to increase road safety through determined actions towards their own employees.

Arriva won the ‘Large Companies’ category, while Bolk Transport from the Netherlands took the award for ‘Small or Medium-Sized Enterprises’. The Hellenic Air Force from Greece was appointed winner in the ‘Public Authorities’category.

Antonio Avenoso, Executive Director of the ETSC said: “These organisations are putting road safety at the heart of their operations and have the results to prove it. We hope these shining examples will inspire companies and public authorities across Europe to see the benefits road safety management programmes can bring. These include not only dramatically reduced numbers of collisions and injuries, but also reduced costs, improved employee well-being, fewer lost orders and less management time spent on dealing with the consequences of sick days, paperwork and legal issues. The business case for road safety at work is clear, but these companies are showing just how it can be done.”

“We are very proud of the Praise Award and are pleased that our efforts to increase road safety on the Danish roads have created international attention, says Nikolaj Wendelboe, CEO of Arriva Denmark. “It is a huge tribute to all our employees, who make an enormous effort every day to make it a more comfortable and pleasant experience to travel with Arriva’s buses, trains and waterbuses.”

Anders Lukowski is a graduate from Copenhagen Business School and MSc. in Management, Accounting and Controlling. Previously, his career has focused primarily on financial analyses and models related to Activity Based Costing and the use of Business Intelligence systems. In recent years, Anders’ focus has turned to performance management in a broader sense, including LEAN methodologies as well as a much stronger focus on behaviour theory and the psychological mechanisms in Change Management. Today, Anders is responsible for policy development and policy implementation in Arriva Denmark.