Dresdner Verkehrsbetriebe AG (DVB) is the public transport operator in Dresden, Germany. Already operating modern low-floor trams and buses on more than 40 lines, the operator has recently introduced a battery-operated electric bus to its services. How does the bus work? DVB’s Director of Finances and Technical Services, Reiner Zieschank, explores the technical details. 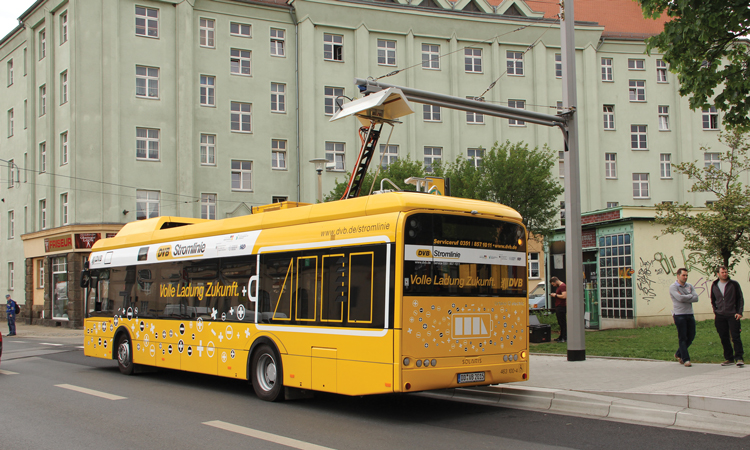 DVB provides the coordinated service of 166 trams, 151 buses on more than 40 lines to Dresden and the surrounding region. Additionally, DVB provides a special service with four ferry boats on the River Elbe, a suspension railway, plus a funicular railway. More than 400,000 passengers use the various modes of transportation every workday, and the annual ridership is approximately 153 million passengers. All trams and buses are modern low-floor vehicles. DVB runs a total of 18 modern hybrid buses on its lines and has recently introduced a battery-operated electric bus; thus, actively contributing towards an attractive and clean city. DVB is one of the first participants to have signed the ‘Charter on Sustainable Development’ implemented by the International Association of Public Transport (UITP).

In 2011, the federal government decided to support electric mobility. This has been implemented by means of a publicity programme called ‘Electric Mobility Showcase’. This will be achieved in four selected regions by integrating the technologies into large-scale demonstration and pilot plans thereby giving the project visibility. Through cooperation between science, industry, operator and central government, innovative elements of electric mobility are going to be tested. All projects will serve to reach public awareness including national and international demand.

DVB’s ‘Electric Bus Line 79’ project is one of the 40 projects supported in the showcase region of Bavaria-Saxony.

After opening of the tendering procedure in 2013, bus manufacturer Solaris won the bid for constructing the vehicle in early-June 2014. A Solaris ‘Urbino 12 electric’ low-floor bus was chosen which has an electric motor with an output of 160 kilowatts. The vehicle is 12m-long, has three doors and can carry a total of 71 passengers; 29 on seats. Behind the second door there is a platform for strollers and wheelchairs.

The vehicle has no internal charger. This was an explicit requirement of the tender specification. Instead, the external charger for charging over night was opted for from Solaris who used several European standards for the charging interface. These standards – coming from the passenger car sector – could be the basis for the intermodal use of charging infrastructure. For this reason, the charging system is based on a standard 5-pin. The loading head was developed accordingly.

At the end of 2014, the total design of the bus had been agreed and considerations made for the requirements of the funding provider and DVB. This consisted of the development of the hybrid bus design to give the passenger the continuation of electric mobility projects in Dresden. Since 2007, DVB has gained experience with hybrid buses from manufacturers Solaris, Mercedes-Benz and Hess. The hybrid buses have been studied to determine further improvements within the scope of the project ‘Pilotlinie 64 – Efficient Electric Mobility in Dresden’. This includes lightweight construction which is exemplified by the rims that are to be readied for mass production as well as an innovative heating and control concept. Today, a total of 18 hybrid buses are in daily scheduled service. One of the objectives is to further reduce fuel consumption.

In September 2013, a tender was launched for a traction battery. During the proceedings, two companies showed their interest, but only one company submitted a bid. By February 2014, discussions took place with the Technical University Dresden (TU Dresden) and the bidding company. Technical details and delivery arrangements were then clarified. In Table 1, some details of the traction battery are summarised.

The lithium-ion traction battery was installed in the vehicle in November 2014. Functional testing and acceptance of the systems took place in the second quarter of 2015.

After technical clarification of the bus, the planning of the bus stop and the charging system started.

When planning the charging infrastructure, two types had to be considered. On the one hand was thinking about installing the charging process somewhere along the Line, and on the other hand we thought about loading the battery at the depot in Gruna. The latter runs via a portable plug-in charger, which can reach a charging power of 32 kilowatts. Thus, the traction battery could be charged gently, but it would be time consuming.

At the new final stop of Line 79 (at Dreyßigplatz) a new charging station was built. Making contact with the vehicle has been achieved with a 5-pin pantograph by the manufacture Schunk.

The system consists of an extendable pantograph, which is permanently fixed to the roof of the electric bus, plus a pylon with cantilever beam for high current charging. This system does not require active cooling.

In the tender specifications, it was determined that the charging system should be able to provide power from the tram traction network. When tendering for the charging station, specific technical requirements had to be set. In addition to the perspective increase of the nominal voltage of DVB’s power network from 600 V to 750 V and voltage fluctuations, the current is fed by recuperated power during braking of the trams. The power network of DVB tram lines is perfect for a fast charging system for buses. It is available at many interfaces within the bus network. The required criteria in the tender specifications have been fulfilled only by Solaris.

The planning procedure was followed by consultations with the technical departments of the City of Dresden, in particular concerning the combined pylon for public lighting and the charging pole. A special challenge was the limited extension height of the loading arm on top of the bus. The pylon stands on the access road to the motorway number 4 and has to be easily passable for heavy trucks. The charging pole has only a total height of 4.5m above the road.

Next to the new stop there is a tree and a tram terminal loop. Both should not be affected by the new charging station.

The bus stop was carried out with the special ‘Dresdner Kombibord’ with a board height of 23cm. By using the ‘Dresdner Kombiboard’ the EU-required barrier-free accessibility can be guaranteed. The board also ensures optimal positioning of the bus to the charging pole.

The stop is also equipped with dynamic passenger information system that informs passengers about the estimated departure time and deviations from the schedule (e.g. at longer charging times).

Acceptance of the system

The overall acceptance of the system turned out to be challenging. In addition to the provisions of the German bus regulation BO-Kraft for the operation of the bus, electro technical standards, restrictions on traffic rights and – regarding the use of tram traction power – the requirements of the German tram regulation BO-Strab had to be considered. With its connection with the tram traction network and the 5-pin pantograph, the system is the first application of its kind in Germany. As there were no valid approvals, approving authorities were taken into account from the very beginning.

Start of operations in June 2015

The electric bus has been in operation since the middle of June 2015. The electric bus Line 79 is 5.2km-long and one of the shortest routes in the DVB network. Plus it is the first electric bus line in Saxony overall. The circulation time takes approximately 16 minutes and the line operates with 20 minute headways with one vehicle. There is only a turning time of three to four minutes to charge the battery at the Dreyßigplatz bus stop. After charging the bus can run the entire Line 79, as well as the trips to the depot without intermediate reloading. The new battery driven bus consumes around 50% less energy per kilometre than a comparable diesel bus – without any local emissions.

The results of the project EDDA bus from the Dresden institute Fraunhofer IVI find their way into the new electric bus project. In the EDDA bus project – a battery bus with an over-roof-charging system – was developed as well but with a 4-pin pantograph and connection to the public AC medium voltage grid. The DVB has been project partner for the practical testing and has used the bus as an additional vehicle outside the schedule on two lines. The test showed the technical functionality and reliability of the system. A disadvantage of the bus is the relatively small battery and the associated longer loading times.

With the new fully-electric bus, the DVB developed know-how in noise-free and low-emission driving. The use of the electric bus also contributes to the objectives of the Clean Air Plan in Dresden.

After successful operation on the short line, the electric bus network could be extended further. Then, more recharging at stations along the route would be needed in order to deal with longer distances.

Reiner Zieschank has been Director of Finances and Technical Services at Dresdner Verkehrsbetriebe AG (DVB) since 2005. Prior to this position he was Commercial Director of DVB for 13 years. Reiner has also previous worked as Director of Technische Werke Dresden GmbH, as Director of DREWAG Stadtwerke, and as Director of Energie Verbund Dresden GmbH. In 2011, Reiner was Chairman of the regional group of the Association of German Transport Companies (VDV). In 2014, Reiner received the EBUS Award for his extraordinary engagement in the field of electric mobility with public transport buses. 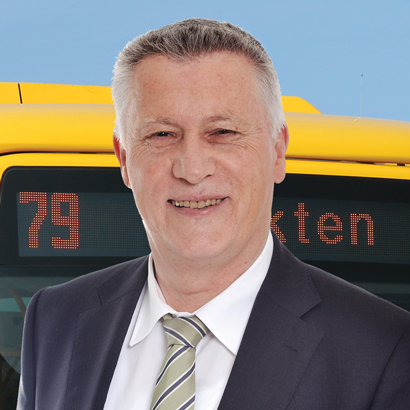