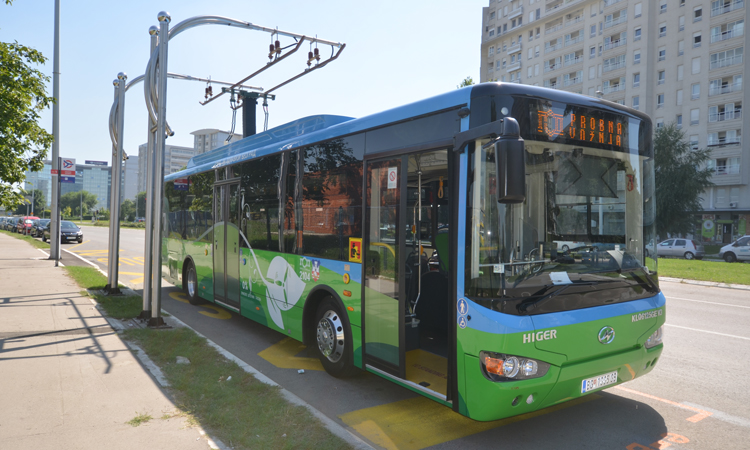 JKP GSP ‘Beograd’ is the main carrier of public transport in Belgrade and the largest operator in South Eastern Europe. Its development plans focus on the possibilities of applying the concept of e-buses to the most ecologically vulnerable corridors. Previously emphasis was placed on monitoring trends in the development of the concept and on exchange of experiences with companies for public transport and bus manufacturers, followed by a pilot testing.

On 1 September 2016 JKP GSP ‘Beograd’ began regular operation of five Solo 12m-long buses with a purely electric drive on a new bus line in Belgrade named ‘ЕKО1’. That was the first step in a long-term strategy of using electric drive buses. These vehicles have a steady trend of development and improvement, which makes them more competitive to concepts such as diesel and CNG. For example, significant improvement in terms of reducing vehicle weight has enabled an increase in capacity (80-90 passengers), so that it now approaches the capacity of a standard diesel-powered bus (100-105 passengers).These are significant advancements that allow the use of e-buses to be used for the first time on the central bus lines of the subsystem in Belgrade.

From idea to realisation

The idea of introducing buses with a purely electric drive arose in JKP GSP ‘Beograd’ following continuous monitoring of development trends of the bus transport subsystems in many cities, both in Europe and the rest of the world. The plan was for Belgrade to be included in the ‘green’ map of cities with electric buses, whereby the vehicles would operate on a completely new line in the city centre – making them more recognisable. Full support for this project was given by Sinisa Mali, the Mayor of Belgrade. The holder of the project is the JKP GSP ‘Beograd’ in cooperation with the Environment Directorate and the Public Transport Directorate of the City of Belgrade.

The ‘EKO1’ line – that runs for 7.85km from Vuk’s Monument to Belvil – is planned to connect the left and right side of the River Sava, i.e. the Old and the New Belgrade, while passing through the central city zone. There are several tourist attractions along the line, as well as the administrative centre of Belgrade, The Faculty of Law, The Faculties of Engineering, The ‘Ušće’ and ‘Delta City’ Malls, The ‘Kombank Arena’ and The ‘Novi Beograd’ Railway Station.

The introduction of e-buses is a good way of ‘rehabilitating’ an electrical transport system on the left bank of the River Sava, since there were three trolleybus lines operating there that connected the Old City with Zemun and New Belgrade until the 1970s.

The ‘EKO1’ line therefore completely justifies the use of electrical buses, since the route passes by some very attractive locations and through some areas with a high level of air pollution and noise.

In ‘Direction A’ there are 14 bus stops and 18 in ‘Direction B’. With five e-buses on the line, the planned time interval for the buses is 16 minutes. The offered transport capacity is approximately 408 seats every hour.

By analysing electric drive bus operations from different manufacturers using different charging systems and electrical energy storage options, we came up with an operational solution to suit the conditions in Belgrade and agreed that the most appropriate charging system would be to have fast-charging pantograph systems at termini with ultra capacitor energy storage.

Based on the tender for the procurement of five e-buses, the Chinese bus manufacturer, Higer, and its authorised representative for Europe, Chariot Motors, delivered KLQ6125GEV3 electro buses to JKP GSP ‘Beograd’. The vehicles have a minimum passenger capacity of 80 and are equipped with two traction asynchronous motors ‘Siemens’ IPV5135; 2×67 kW nominal power; a system for storing electricity by ultra capacitor ‘Aowei’ with 20 kWh capacity. The chargers for fast-charging have a power of 150 kW. The charging station at Vuk’s Monument terminus is connected to the DC voltage from the tram contact grid and the charging station at Belvil to the three-phase AC voltage from the public power grid. One charger for slow-charging with the power of 40 kW has been installed in the e-bus maintenance and parking depot. The contract includes the delivery of diagnostic equipment and spare parts, as well as the training for driving and maintenance of the vehicles. The entire project cost approximately €2.6 million.

By implementing the first bus line with purely electric drive buses, a new chapter in Belgrade’s bus network has begun. Due to the fact that this is a completely new concept – not only for Belgrade but all of South East Europe – particular attention shall be paid to monitoring all of the technical characteristics of the system in order to get a true picture of the advantages and disadvantages of the system.

The introduction of e-buses in regular operation is a significant step in the development of Belgrade’s public transport system. The concept of e-buses with pantograph charging systems at stations completely meets the operational conditions in terms of electricity supply, the daily autonomy and the passengers’ transport demands. The new ‘EKO1’ bus line with electro buses will enable the full effect of the use of this concept in terms of environmental requirements. Tracking the results of the use of electro buses on the ‘EKO1’ line will serve as the best argument for defining future strategies of public transport in Belgrade, regarding this concept of buses and its mass application.

Željko Milković graduated from the University of Belgrade at its Faculty of Mechanical Engineering, Department of Engine and Vehicles in 1995, as Master Mechanical Engineer. Željko is a Master Mechanical Engineer and currently the Director of JKP GSP ‘Beograd’. He has experience in the fields of vehicle operations and maintenance, managing, new technologies and alternative fuels. Željko also has experience and cooperation with the largest companies for public transport in Europe (Wiener Linien (Vienna), PC Tel Aviv, ZET Zagreb and a number of bus manufacturers.

Dušan Savković graduated from the University of Belgrade at its Faculty of Mechanical Engineering, Department of Engine and Vehicles in 1985 as Master Mechanical Engineer. Dušan is currently a Specialist for Technical Sciences and is the Executive Director for Technical Operations for Electric Subsystem of JKP GSP ‘Beograd’. He has wide experience in the maintenance and operation of trams and trolleybuses and the application of information technology in the maintenance sector.

Slobodan Misanović graduated from the University of Belgrade at its Faculty of Transport and Traffic Engineering, Department of Road and Urban Traffic and Transport in 1994 as Master Traffic Engineer and PhD Candidate. He is currently the Project Manager in JKP GSP ‘Beograd’ and a leading expert in the areas of clean vehicles for public urban transport, technical operations of bus subsystems, alternative fuels, air pollution and energy efficiency. Since 2005 Slobodan has been a permanent Member of the UITP Bus Committee, the ZeUS User Group and the ‘Hybrid User Forum Bus-Section’ project.

Jovana Paunović graduated from the University of Belgrade at its Faculty of Political Sciences, Department of European Integration as is currently working in the PR Department of JKP GSP ‘Beograd’. Jovana follows the European development trends and their implementation, examines public opinion and informs the public regarding public transport news and organises a team that aims to implement and promote the CSR activities.