Metro Dublin: A major step-change for mobility in the city 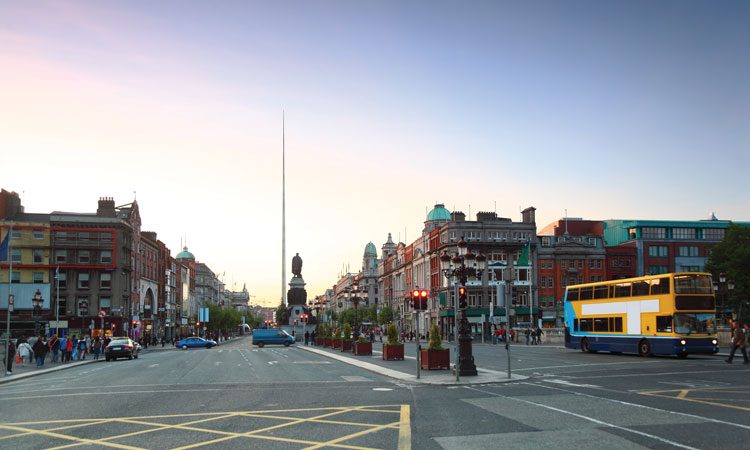 Metro Dublin is now well into its planning process, having met with the Irish Planning Board as part of a Statutory Pre-Application Consultations process. This process is mandatory prior to making an application for a Railway Order. The application itself is made directly to the Board rather than submitting it to the planning departments in the relevant Local Authority. Metro Dublin has addressed the issues raised by the Board, and awaits the Board’s advice.

Over a year ago, the Irish Minister for Transport relegated the two metro schemes that were being developed by state agencies “back to the drawing board” to start again with a clean slate and a view to seeking lower cost viable public transport proposals. Metro Dublin – as a private sector based innovative initiative that costs much less than the dropped schemes, and as a project that can be delivered by 2023 – is clearly congruent with this latest government policy pronouncement that additional public transport capacity must be met in the medium-term through lower-cost alternatives. Recently the Minister for Public Expenditure attended a press conference about the government’s Capital Programme review process, where he stated that a metro line could constitute a ‘leading example’ of a capital resources investment that can positively underpin sustainable economic growth and social progress, thereby enhancing Ireland’s future growth potential. 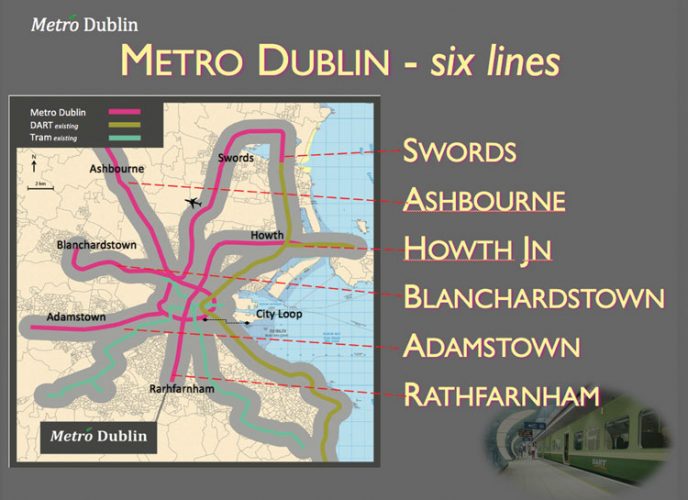 Figure 1: The six lines of the Metro Dublin

Metro Dublin, as a private sector funded initiative, has considered many aspects not normally tackled in metro schemes, given their greater freedom to do so than is usually afforded for state agencies. These include such considerations as net exchequer cash generation throughout the procurement and operation phases; how the geography of city’s public transport networks affects revenue from patronage; and how construction and operational costs can be reduced by the use of innovative designs.

It is probably worthwhile reflecting on a pertinent question at this point – that being What is the future of rail as a means of transport in its broadest sense?

Many of us would love to investigate the full scope of where rail could go, but daren’t interrupt our busy lives to see where such consideration could really take us. Many make incremental improvements to railways, but only a select few could do it as spectacularly as the likes of Elon Musk. The question of whether we are at a transformational rail ‘step-change’ is open to debate.

Musk’s utterance on urban congestion that “traffic is killing me” is a very welcome rabble rouser for the rail industry. We can believe that his solutions will be spectacular and expand our work in the rail industry. I see his goal to increase tunnelling speed “somewhere between 500 and 1,000%” to be dependent on enabling Hyperloop to efficiently access city centres. One look at his tube in the desert has confirmed my opinion.

Given his ability, I have no doubt that in some places a five-fold speed increase in tunnelling speed could be achieved, and that circa 2km per week could be delivered at a much lower cost than before. His solutions, without hesitation, will be appealing to future city planners. However, planning and construction bottlenecks are generally most associated with the provision of stations. Possible solutions are discussed later.

Metro Dublin acknowledges that revenue from patronage is most influenced by the geography of a network, as well as other decisions taken by a city (such as allocating a role to each mode in the multi-modal network based on its inherent strengths, as Vienna did). Cities with high public transport patronage have well-developed multi-modal networks with a high service intensity and network coverage. They operate through radial and city loop lines that are well integrated and have a significant number of stations that act as hubs to deliver a high number of travel opportunities (departures) per hour via different modes. Milan and Vienna are good examples of such a city. Metro Dublin’s design can be seen to incorporate this formula – see Figure 2. 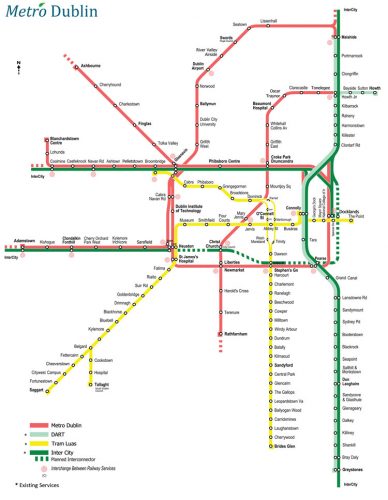 Metro Dublin will reduce construction and operational costs through innovative designs using a single tunnel with trains in each direction and a novel station layout. Research and simulations carried out by Metro Dublin prove that far higher levels of safety and quality of service can be delivered by a larger single, as opposed to smaller twin tunnels. Metro Dublin has an innovative layout for some of its stations, for which a patent application has been made (see Figure 3). 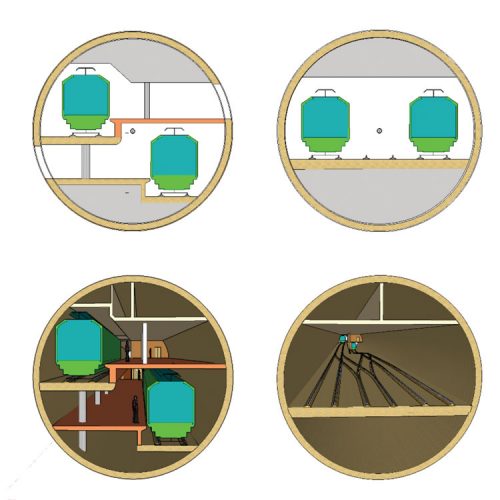 The layout will greatly reduce cost. In a tunnel of 11.9 metres internal diameter it incorporates upper and lower platforms, 7 and 6 metres in width, within the bore of a smaller tunnel. This facilitates a far smaller surface construction site footprint for the stations, which also facilitates the placement of stations closer to key locations (where they need to be, as opposed to where they can be accommodated). In addition, station platforms can be aligned in a direction that is best orientated to the next station, which benefits horizontal alignments (fewer curvatures) and shorter train paths. Importantly, the layout enables better track path vertical alignments as it minimises the height difference between track paths at the approaches to and from stations.

Metro Dublin will provide the city with an additional 60 station stops at 53 station locations. The expansion works include 18km of new surface lines and 46km of underground tunnels, and involves the upgrade of 29km of existing lines. This equals a total of 93km in construction length. The constructions total runs on the Irish Rail gauge and its tracks are separated from the Irish Rail intercity tracks. 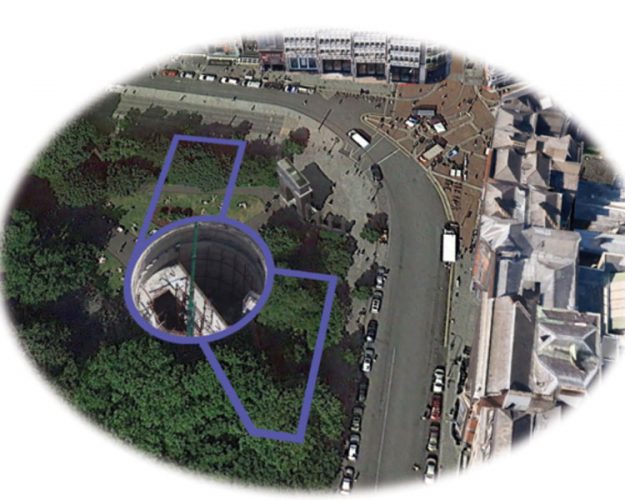 The Metro Dublin project constitutes a major step-change in public transport infrastructure provision in Ireland. It is a major lacuna that Dublin, as a capital city of one of the world’s most advanced economies and one of the fastest growing countries in the European Union, does not yet have an integrated underground or mass-rail facility as part of its public transport network. As an EU member-state capital, Dublin is still in the anomalous situation of not having a direct rail connection between its airport and city centre. Metro Dublin proposes to remove these deficits by funding, designing and implementing a private sector based project that will provide Dublin with a mass rapid transit system to meet the city’s major public transport needs for the 21st century. In this way, it will enhance Dublin’s ability to be internationally competitive on the European and global stages and continue to be an economic engine of prosperity for Ireland.

Ireland has experienced a remarkable economic rebound over the past five years, following a major crisis in 2008. The main challenge for Ireland is to ensure durable and resilient growth in the future. The extent to which public investment is available to support the delivery of social (health, education, etc.) and economic (roads, railways, etc.) infrastructure has returned to the forefront of policy issues after years of contracting government investment along with demands on the government to write down its debt and to lower taxes. The recent resurgence of the national economy is widely attributed to the socio-economic growth of Dublin, which is acknowledged to have been the driver of wider prosperity in the State.

Cormac Rabbitt has a Bachelor of Civil and a Master of Industrial Engineering Degrees from the National University of Ireland. He has a track record of taking initiatives that have helped influence the Irish Government to alter and proceed with the development of motorways and railways. They include building motorways instead of local by-passes to many of Ireland’s towns and villages; and the realignment of significant sections of motorways away from contentious areas that enabled them to be delivered ahead of their listed position and at lower costs. He also played a pioneering role in developing plans that influenced the Irish Government’s decision to establish a metro system in Dublin.