Making passengers part of the fight against climate change 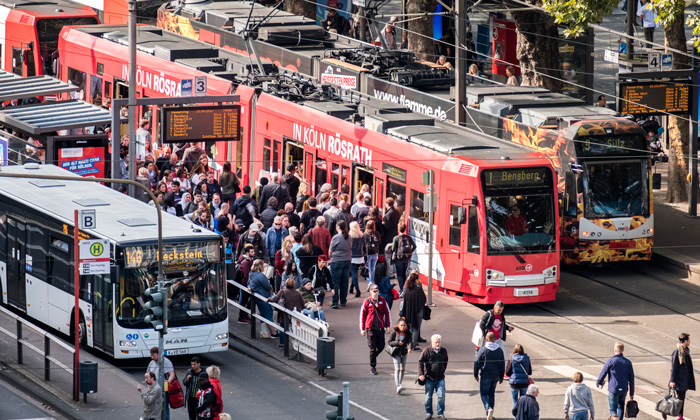 What can we do to reduce greenhouse gas emissions and fight climate change? This was the question posed to each UN member in attendance at COP23 a fortnight ago, the 23rd Annual United Nations Climate Change Conference, and a question that KVB, Cologne’s public transit authority, is taking seriously. 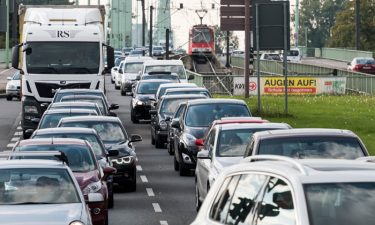 Carrying just one passenger on average, cars are a major contributor to climate change

Public transport is good for the environment, supporting the transit of large numbers of people at once via bus and various forms of rail. Compared to a car, which typically carries on average only 1.1-1.2 people at a time, KVB’s seats across its services are almost always full at peak times, with standing room only available for commuters.

But, how can a small enterprise make a dent in such a major global problem?

Public transport plays an important role in climate change. Buses and rail vehicles are problem solvers, and by using them, people can actively contribute to fighting climate change. Already, many people’s transport needs are realised by buses and rail vehicles. About 50 per cent of KVB’s passengers would use private cars if the KVB didn’t exist, while the other 50 per cent would go by bicycle, motorcycle, walk or stay at home.

The development of cleaner public transport is vital in the battle against climate change. While there has been an increase in the amount of environmentally friendly public transport services, there has also been an increase in the ownership of high fuel consumption private vehicles, like modern SUVs. The latter cancels out the former, meaning that the transport sector as a whole has made no contribution to reducing emissions since 1990.

Put the customer at the heart of the campaign

Appealing to passengers’ sensibilities and making them fully aware of the consequences of continued global warming is at the heart of KVB’s campaign to encourage a modal switch, and has been for several years. Hard hitting images, accompanied by the offer of reasonably priced, efficient, clean and sustainable transport, suggest to passengers that using KVB’s services is the solution.

Making passengers feel like part of the solution is key, and offering statistics that speak for themselves is a useful tool: a private car emits 142g of carbon monoxide (CO2) per passenger kilometre. By comparison, a KVB passenger’s share of carbon monoxide emissions amounts to just over 18g per passenger kilometre. Journeys made via KVB’s light rail vehicles are CO2-free, as green electricity is used on all twelve lines.

In 2016, residents and guests boarded KVB’s buses and rail vehicles about 277 million times. Naturally, these numbers aren’t only the result of the campaign and the subsequent passenger awareness, but are aided by the fact that the region’s public transport is very efficient, and always striving to improve and expand.

The KVB advocates the development of its offers among politicians and the city’s administration. We want to extend existing LRV lines, develop new bus lines, upgrade the East-West axis for higher performance, purchase new vehicles and modernise existing installations.

We always consider the climate and environmental aspects when we want to make a change. In such cases it is important to unite the customers’ demands, the technical and operational feasibility and the economic efficiency. Only in this way can sustainable entrepreneurial actions be developed which also consider a long-term plan to beat climate change. 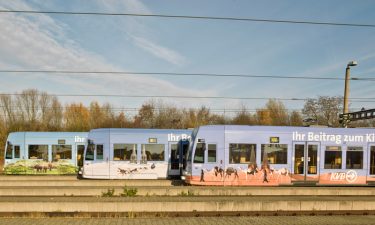 We have used green electricity on our 12 LRV lines since the beginning of 2016, and in doing so, have eradicated the CO2 emitted by the light rail vehicles, which was previously 46g per passenger kilometre. In addition, we have put more electric buses into operation, converting bus line 133 (between Cologne Main Station and Cologne-Zollstock) into an electric line. Using green electricity on this line reduces CO2 emissions by approximately 506 tons every year compared to diesel-fuelled buses.

We are also working on encouraging a more gradual modal shift, not only through our advertising campaign, but through new infrastructure. We have just begun the construction of a new park and ride in the Cologne district of Porz-Wahn. Located near two suburban lines, and several bus lines, it should encourage commuters to drive just part of the way to work, continuing their journeys on public transport. A single user travelling 180 days per year (360 journeys) would reduce their CO2 emissions by 920kg a year.

The KVB follows a strategy that promotes progress, not waiting for others to act. It doesn’t matter to us whether other companies should be more active because they contribute more to global warming. We are an active partner in environmental protection for the city of Cologne, and take steps where we can to act, and to educate others.

The KVB is happy to exchange its experience and knowledge with groups from across the world. Recently, a group of Peruvians paid a visit to us to learn about the KVB bicycle and electric bus routes. They were especially impressed by the bicycle hire system, and tested the bicycles intensively.

The global aspect is important, as climate change is affecting everyone; it doesn’t adhere to borders.

Relationships between international transit authorities should be bilateral; our solutions can be helpful in other parts of the world, just as solutions from other countries inspire our plans. In the end, those who want to protect the climate and the environment, and need useful solutions and useful commodities for this purpose, will find the support they need.

Germany’s share of worldwide climate change amounts to just two per cent, whereas that of China now amounts to one third. Although 26 per cent of Germany’s electricity is generated from renewable energy, which is twice as much as in India, each German still contributes more to the climate change than each Chinese and each Indian. These figures are why the KVB does not rest.

The KVB may only be a small cog in the big wheel of climate change, but customer awareness of the problems the world is facing can play a significant part in the discussion to encourage better, cleaner and more public transport. Global warming deniers can only be counteracted by practicable solutions, so the KVB will continue to be an advocate of environmental protection, further improving its green services.