The important and ever-changing world of fleet maintenance

Intelligent Transport’s regular blogger, Graham Ellis, discusses the importance of bus fleet maintenance and how the advancements in technology have changed the nature of engineering… 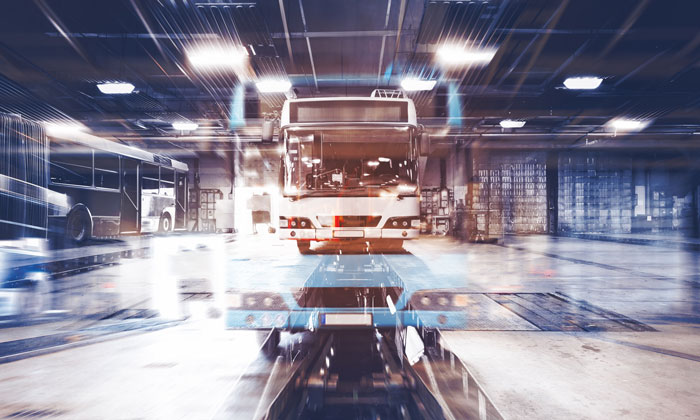 The theme of my blog this month is maintenance, which is a subject close to my heart, both as an engineer and as a crash investigator. In my career I have attended a number of incidents, including fatal ones, where the first question asked at the scene is: ‘Was there a vehicle defect or a driver failure?’ However, for any operator, that is merely the starting point.

After an accident occurs

Once the initial scene is cleared of any casualties, the police may call in specialists to assess the scene. Where a potential life-threatening injury has been sustained it is normal for one of the police force’s specialist collision investigators to attend and carry out a detailed examination of the scene, including photographing and sketching the position of the vehicles/casualties etc. Following this initial action it is likely that the police – on their own or in the company of the DVSA (Driver and Vehicle Standards Agency) officers – will then examine the driver’s hours and vehicle maintenance records. This is a very uncomfortable situation to be in as you never know if something has been missed during the course of routine maintenance.

This happened to me many years ago: I had been in a post for about a week when one of my single-deckers collided with a private car and – as is usual – I attended the scene to view the situation for myself. I found the front of the bus buried into a mound of earth on the nearside, with the front entrance pushed significantly rearwards and the private car buried under the front.

Consequently, we had a visit from the DVSA (Driver & Vehicle Standards Agency) who examined all of our records and, thankfully, all was in order. The accident was caused by the car driver taking a bend too fast and skidding across the damp road surface toward our oncoming bus; the driver tried to swerve out of the way but the earth bank stopped the bus dead and the car collided with the front. Fortunately, the car driver survived but spent a long-time in hospital. This incident serves to illustrate the point that you never know when an accident might occur, so you have to maintain your vehicles to the highest standard at all times as this is likely to be front page news on the day!

Taking a different perspective, maintenance is the key to keeping vehicles on the road and earning income: it is of no value to have your fleet sitting in workshops; costing you money; and probably annoying your customers who want to make use of your services. When I began working in the industry many years ago, our maintenance regimes were based upon the manufacturer’s recommendations and no one ever varied them.

After several years some clever person produced a computer that wasn’t the size of an average family home and consequently we began to see desktop machines – albeit pretty basic ones, but they were available and useable. Suddenly, we had use of a machine to which we could feed all manner of data and, provided you kept it fed with coal, eventually it could provide answers to a very basic set of questions. This was the start of the computer revolution, when we saw an explosion in fleet maintenance packages and all of a sudden we could start measuring the efficiency of our methods and the impacts that they had on our vehicles and their ability to remain in service for longer periods.

The development of maintenance technology

An aspect that did not change was the manual intervention for checking fluid levels and unit tightness, however we did start doing oil analysis to begin working out failure trends on major units such as engines, gearboxes and axles. Even that function is becoming obsolete as technology is taking over – now just about everything on a vehicle has a sensor to carry out the work that used to be done manually.

I don’t even need to leave the driver’s seat to check the engine oil level; it is part of the start-up self-test. Following the way technology is developing, it will soon be possible to automate the majority of maintenance tasks and this is already being seen in the rail industry where train servicing is planned to be carried out mostly via robots. Going back to general maintenance, things have changed dramatically in terms of lubricants; we now tend to operate on semi or fully synthetic lubricants that allow us to operate extended oil drain periods.

Back in the 1970s it was still usual to change oil and filters at very low mileages – irrespective of operating terrain – so a vehicle in London would be serviced in the same way as one running in the highlands of Scotland; despite both operations being entirely different in terms of vehicle wear and tear. Vehicles today can now be serviced in accordance with their duty cycles, which consequently saves both time and money, whilst maintaining high levels of vehicle availability and reliability.

The value of experience

These days it seems that no one strips and re-builds units such as engines and gearboxes in-house, as I was taught to do, and even diagnosing faults is now done with computers. However, I can happily still rely on my basic mechanical training when called in to look at problems on a vehicle. I have yet to find a computer that can replace my many years of experience, but they can capture and enhance what I already know and share it with the current and next generation of engineers.

I’m glad that I am closer to retirement than midway through my career, because current and emerging technology is changing the whole nature of engineering. These days, you need to be more of a computer engineer than a mechanical one; and you don’t really need any mechanical aptitude to maintain vehicle fleets. I’m not sure that I would have had the capacity or even interest to change to that extent. I occasionally still get my hands dirty, as I will be doing over the next few days preparing cars to carry out crash tests with, for the Institute of Traffic Accident Investigators at Bruntingthorpe Proving Ground. This work enables me to maintain a view of the current industry technology without having to ensure that a customer isn’t kept waiting for their car to be returned.