Because of its geographic location in Europe and its sustained demographic and economic growth, the Grand Duchy of Luxembourg is facing an increasingly urgent and unique mobility challenge. Exclusively for Intelligent Transport, Luxembourg’s Minister for Sustainable Development and Infrastructure, François Bausch, explains that the solution is to invest heavily in a multi-modal and more sustainable approach. 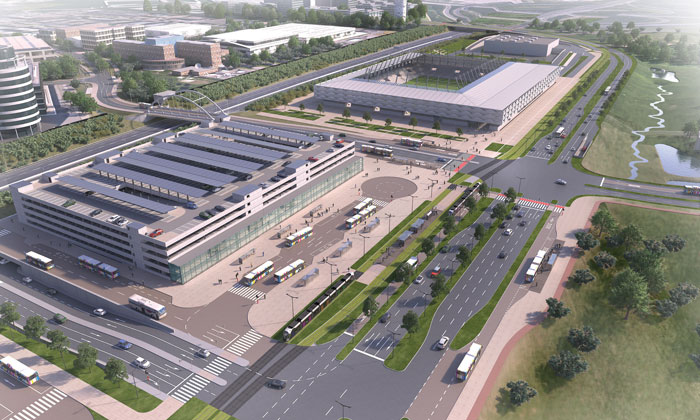 Every day, the country with its 576,000 inhabitants welcomes approximately 176,000 commuters from Germany (43,000), Belgium (43,000), and France (90,000). Jobs continue to be predominantly situated in the capital; 163,000 jobs, of which only 45,000 belong to working residents. In other words, there are four times as many jobs as there are residents able to work: a unique circumstance in Europe. This economic growth as well as this concentration of jobs in the capital have resulted in increased traffic congestion and longer commutes for residents and foreign commuters alike.

In terms of transportation infrastructure, Luxembourg’s road network and public transport system (trains and buses) were, up until now, organised in a very monocentric way, which only aggravated the enormous challenges of mobility. In order to remedy this situation, Luxembourg is investing heavily in a multi-modal and more sustainable approach.

It is the Luxembourg government’s objective to achieve a 25/75 modal split by 2020 in favour of public transport as well as cycling and walking. Therefore, we have planned very important public investments in new infrastructures.

The reorganisation of public transportation towards a polycentric, multi-modal network is thereby a key element. Throughout the country, approximately 20 multi-modal hubs are currently being built1 to enable commuters to easily switch between different modes of transportation. Nine of these multi-modal hubs will be located on the 16km-long track of the future tram1 that will cross the entire urban agglomeration of the capital and thus serve as the backbone of the public transportation network. Another priority of the government is to create a performing network for direct, fast and secure connections by cycling and walking all over the country.

Furthermore, in order to facilitate the transfer from cars to public transport, Park & Ride site-capacity is being doubled throughout the country by the construction of an additional 13,100 spaces. A portion of these parking spaces will be equipped with charging stations for electric vehicles in order to promote zero and low emission cars.

Luxembourg’s government is aiming at 800 stations boasting 1,600 charging points, by 2020 on a national level, suited for electrical and hybrid plug-in cars. Each of the 105 Luxembourg communes will dispose of at least one charging station; the actual figure depending on the number of inhabitants and jobs in the concerned territory. Half of them will be installed at Park & Ride sites with the remainder at public parking locations. As of coverage, special attention will be given to activity zones, educational facilities, tourist sites, sports or cultural facilities as well as shopping centres, town halls or other administrations.

Access to electric charging points will be granted to the customer by means of a credit or prepaid card, combined with the mKaart – a reloadable, multifunctional mobility card that can be bought at mobility centres nationwide.

Another project, which is in an early stage but will ideally be launched by end of 2017, is a car-sharing system especially for train passengers, implemented by CFL (Luxembourg’s railway company), at 20 major railways stations throughout the country. It is intended to complement the railway passengers’ mobility needs.

The majority of these projects are currently being implemented; in particular, the tram whose first track section will be completed by the end of 2017.

The new tram will potentially carry approximately 110,000 passengers per day, on a partially turfed track with 24 stops, in intervals of 3-5 minutes. The average distance between stops will be 500m.

mLive – the national public transportation telematics project, enables people to tailor their mobility to their lives. Cutting-edge technologies and centralised data manage ment provide public transportation clients with all the general and detailed information they need to plan their own individual mobility paths.

With this system, customers can obtain real-time information on bus departure times. Buses are equipped with information screens that show where the bus is positioned along its route, so that passengers can get ready to get off the bus, and find out when to catch the next bus. In addition, a voice announcement makes it even easier to know where you are. Real-time information screens on public transportation, therefore, improve the reliability of service as well as ensure that connections can be made on time.

That is not all. mTicket is a smartphone app that allows users to get short- or long-term tickets on their handsets.

mKaart is a reloadable, multi-functional card that can be loaded with up to eight transport tickets at a time and at the same time gives access to other mobility services such as mBox, bike-sharing, car-sharing, Park & Ride facilities and mBoxes (secure places to park bicycles).

mKaart can be purchased at mobility centres or at any other official public transportation ticket office (such as the CFL, TICE, or AVL). mKaart can also be recharged at vending machines or online2 where all tickets can be paid for online, and then downloaded onto a single card.

François Bausch was named Minister for Sustainable Development and Infrastructure within the Luxembourg government in December 2013. A member of the country’s Green Party since 1986, François was elected to Parliament for the first time in 1989 while standing for the Green Party in the constituency of the Centre. He served as a member of Parliament until 1992, before being re-elected from 1994 to 2013. Among others, he has held the positions of Chairman of the parliamentary Oversight Committee of the State Intelligence Service from 2009 to 2013 and assumed the role of Chairman of the Green Party parliamentary group from 1999 to 2013. At a local level, François initially served as a Municipal Councillor of the City of Luxembourg from 1994 to 2005, then as first alderman from 2005 to 2013. Prior to embarking on his political career, François was an official with Luxembourg National Railways (CFL).

By François Bausch, Luxembourg’s Minister for Sustainable Development and Infrastructure