In part one of Intelligent Transport’s Payment Technology series, regular blogger Graham Ellis discusses innovations the UK is currently operating with that make public travel payment faster and easier, as well as the possibilities of 1984 becoming a reality… 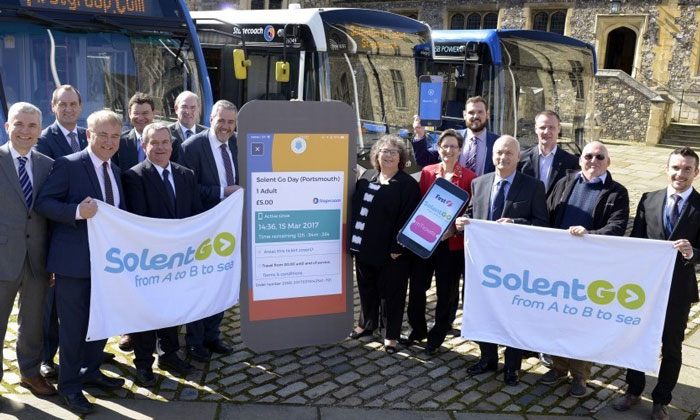 Payment technologies are developing ever more quickly – to the point where passengers no longer even need smartcards; in fact, smartcards are now considered old technology. This was demonstrated at the recent launch of the Solent Go travelcard that took place last month in Winchester. Yours truly is standing second-right in the (above) photograph, enjoying the sunshine and holding the launch banner, alongside senior members of the Solent Transport body and the three operators, Blueline, First and Stagecoach.

One travel ticket for numerous operators

Smart bus users already know that Solent Go customers benefit from being able to travel on most operator services in South Hampshire and, to make journeys even easier, passengers can now buy and show Solent Go mobile tickets from their smartphones.

The Solent Transport partnership represents Hampshire County Council, the two unitary authorities of Portsmouth City Council and Southampton City Council, as well as the Isle of Wight Council, who work together to make sure everyone benefits from transport planning and solutions in the area. The partnership was originally established in 2007 between the three mainland authorities and the Isle of Wight Council joined in 2012.

Solent Go is an example of the alternative option to needing to carry different cards around for the purpose of travelling on different operators’ services. The benefit of this option will become more evident as increasing numbers of operators start to give passengers more choice in how they travel and it is now becoming imperative that the UK rail ticket is modernised to allow ticket-free travel too.

Another group that has moved to contactless ticketing is the Rotala Group operations in the West Midlands (trading under the Diamond Bus name) who are installing new ticket machines that enable some tickets – weekly and monthly – to be printed with individual QR codes.

The QR codes are scanned when boarding the bus and are unique to each ticket. This will help to significantly reduce fraudulent ticket use; a costly problem across the network.

Rail travel is not as simple as bus travel. I recently travelled from Southampton to Solihull on a return journey, followed by two return journeys from Southampton to Reading, which necessitated a total of 14 paper tickets; six of which were for seat reservations. Why is this? It would have been easier for each of those tickets to have been loaded on to my smartphone so that all I had to do was show the screen to the on-board ticket checker.

Another benefit if this were possible is in the event of failures in the travel system. In this scenario the electronic system could give passengers access to travel planning software to negotiate their way around the blockage and also see which operators are accepting which tickets on what alternative services.

The only drawback would be to ensure you have a fully charged phone and that you have downloaded your tickets into the phone’s memory, as rail travel in Britain still provides very poor signal strength to mobile phones.

One other problem is that some operators, such as First Group, actually want to charge their passengers for accessing the on-board wi-fi system: Come on First! We are in the 21st century and this is a basic part of today’s travel environment. Why are you trying to squeeze yet more money out of your customers? It will be interesting to see what First do with their new South West trains franchise as this has had free wi-fi on-board for a number of years and passengers will not want to lose that service under the new franchise. In fact, they will want to see an improvement in the service, which should not be difficult as most bus companies now offer this to their customers along with on-seat charging points.

If every operator offers connectivity via smartphones, where will technology go next? One option being considered is having a smart chip injected into passengers’ bodies to act as an identifier to open doors etc. and prove that the passenger has a valid ticket. I’m not sure that I fancy that. With a smartphone or smartcard I can choose to leave them behind, but with an injected ‘thing’ then it’s always with you. Is 1984 actually becoming a reality in 2017?

That is a local UK view but what is happening across the rest of Europe? In part two of Graham Ellis’ Payment Technologies series next week he investigates the smart ticketing options Latvia is using to aid passengers on their journeys…