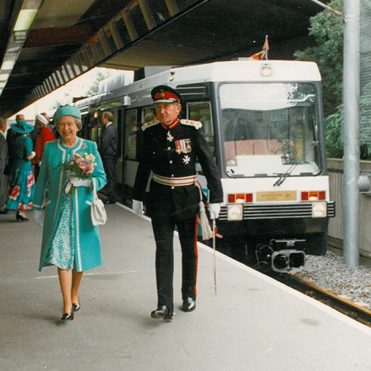 Metrolink’s expansion programme has been one of the largest and most ambitious transport projects to be delivered in the UK. I’m proud to have chaired a study group in 1982 with members of Greater Manchester Council, GMPTE and British Rail – it was within this group that the first light rail proposals were born. Since then, our ambitions have been realised and 2017 is set to be a milestone year in Metrolink’s history.

On 17 July 1992, Manchester had the great pleasure of welcoming Her Majesty The Queen to officially open the Metrolink network, which, at that time, saw a fleet of 26 trams running to 26 stops along 30km of track running between Altrincham and Bury via Manchester city centre.

Other key figureheads to grace the network during its early expansion include then Prime Minister Tony Blair, who opened the Eccles line extension to Broadway Interchange and Princess Anne, who marked the full line opening and completion of the ‘Phase 2’ expansion during an official ceremony in 2001.

Since these early achievements, Metrolink has grown rapidly to become the largest light rail system in the country. Patronage has rocketed from circa 8 million journeys in its first year to more than 37 million journeys a year in 2016. Moreover, October 2016 saw a particularly impressive, record-breaking month for the network; in just 31 days 3.3 million passenger journeys were made.

Early 2017 saw the completion of another ambitious project: the Second City Crossing (2CC), which opened on 26 February.

The new line, which runs through the heart of Manchester city centre, will play a vital role in providing the necessary capacity, flexibility and reliability for the future tram network to operate.

2CC marks the completion of our multi-award winning ‘Phase 3’ expansion programme – which has trebled the size of the original network following extensions to MediaCityUK, East Didsbury, Rochdale via Oldham, Ashton and Manchester Airport. 2CC is also the final piece in the transformational ‘Grow’ project, which is seeing more than £1 billion invested into transport and city centre infrastructure improvements. 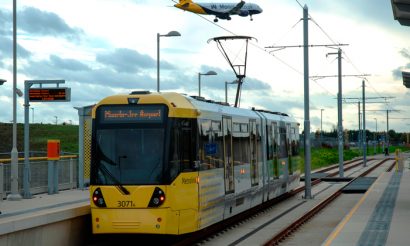 Due to be open in approximately four years’ time, preliminary work and utility work is now under way on the £350 million Trafford Park Line extension. This project will increase the size of the Metrolink network to 64 miles (103km) served by 99 stops.

The six stop, 5.5km line will run from the existing Pomona Metrolink stop through the Trafford Park business district – Europe’s largest industrial estate – to the intu Trafford Centre. As the largest major employment zone in Greater Manchester outside the city centre, Trafford Park is home to over 1,300 businesses and more than 33,000 jobs – with employees travelling from across Greater Manchester and further afield.

In addition, 2017 will see a new operator take control of Metrolink. A contract to operate and maintain the network was awarded to KeolisAmey in January.

Details of this contract include the creation of more than 300 jobs including drivers, apprenticeships and traineeships as well as a commitment to enhance training for staff. There will also be a greater focus on improving operational reliability, and customer service and security through an increased staff presence. Furthermore, there will be a commitment to source a minimum of 40% of supplier contracts within 25 miles of Greater Manchester.

Marking this new era, Peter Cushing, Head of Metrolink, formally handed over the leadership and day to day management of the network to Danny Vaughan in March. Danny has vast experience in the light rail industry and a fantastic approach to working with our partners.

A good transport system is the lifeblood of any city and with the completion of one exciting project and the start of new construction work and contract announcements, there couldn’t be a better time to celebrate Metrolink’s impressive history and the many successes of the past 25 years. Now we turn our attention to the next 25 years.

To find our more, visit www.metrolink.co.uk

One response to “Metrolink celebrates its Silver Jubilee year”