The Wuppertal Suspension Railway (Wuppertaler Schwebebahn) is the world’s oldest electric elevated railway with hanging cars and is a unique system1 . Carrying approximately 80,0001 passengers per weekday through the German city, the world-famous ‘monorail’ has been largely modernised with the most recent investment focusing on new ‘Generation 15’ trains. 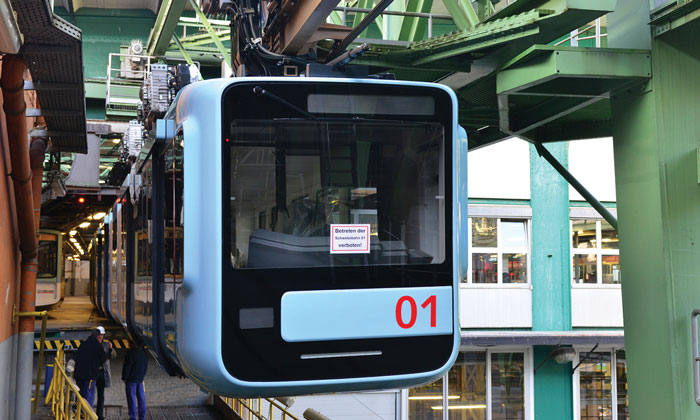 On 10 November 2011 Wuppertaler Stadtwerke2 (WSW) awarded Vossloh a €122 million contract to build 31 articulated suspended monorail trains. The contract was shared between Düsseldorf-based Vossloh Kiepe (traction equipment) and Vossloh España (vehicles). The Berlin-based company büro+staubach – which has also been involved in projects such as the Variobahn trams built for BOGESTRA; the Flexity trams in Kraków; and various vehicle projects for metro and tram networks in China – contributed the design element for the new Wuppertal trains. The original contract envisaged the first two vehicles being delivered in mid-2014 for testing, with the remainder following at a rate of two or three per month between late-2014 and December 2015.

In early-2012 Vossloh announced that Winterthur-based Prose would assume responsibility for the development of all mechanical aspects of the project. These included the welded aluminium bodyshells, the interiors and the running gear. The main stipulation, according to Prose, was that Vossloh Kiepe worked with a single engineering partner to minimise the number of project interfaces and thus simplify project management. One of the main design challenges they encountered was the need to ensure that the new trains were no heavier than those built by MAN between 1972 and 1975, which they were to replace, while incorporating additional key technologies such as passenger information and climate control systems.

The tracks of the world-famous overhead monorail through the Wupper valley, dating from 1 March 1901, were also to be upgraded – with the power supply raised from 600 to 750 V DC – enabling services at peak periods to be increased, with departures every two minutes. On 7 June 2012 WSW awarded Alstom the latter’s first-ever contract in Germany covering all aspects of signalling, train routing, protection and control, worth €17 million. This covered the production and installation of Atlas 400 ETCS Level 2+ for both on-board and trackside equipment, for the 13.3km-long monorail, 20 stations, the two depots, and the new trains. Also to be modified was one heritage vehicle – the Kaiserwagen – which was built in 1900.

ETCS Level 2+ is similar to ETCS Level 3. Each train continuously reports its location to the control system, rather than the task being carried out by means of track circuits or axle-counters. On the WSW line, fixed block sections are being retained with the use of Tetra radio, rather than GSM-R communica – tions. The equipment for WSW was produced at Alstom’s Charleroi factory. The contract was scheduled for completion in 2015, which explains subsequent delays until late-2015 in the delivery of the first vehicles for testing.

The new ‘Generation 15’ vehicle (the reference relates to 2015) is formed of three sections – two long outer ones and a very short intermediate one – with wide inter-car gangways. The 14km-long Schwebebahn has return loops at either end, so the trains are unidirectional. At the front end is an air-conditioned driving cab with touch-screen controls, while the opposite end features a large panoramic window. The vehicle is powered by four 60kW three-phase asynchronous traction motors, operating off 750 V DC. Top service speed is 60km/h and recuperative braking is possible. Each vehicle is 24m-long, 2.2m-wide, and weighs approximately 25 tonnes when empty (bodyshells weigh 5.4 tonnes and the four overhead bogies weigh 12.5 tonnes).

There are two double-leaf entrance doors on a single side of the bodyshell of each of the two longer sections – with one door being provided with a wheelchair access ramp. Seats are provided for 45 passengers, situated mainly in rows on the opposite side to the entrance doors. There are also some rows of longitudinal seating. The seats are of wood veneer with upholstery padding, whereas the seats on the 1970s cars have plastic shells. There is LED lighting throughout and flat screens provide travel information. The passenger accommodation is not air-conditioned, but is provided with dehumidification and cooling equipment.

The first car of the new Generation 15 trains arrived in Wuppertal on 14 November 2015 and was presented to the public at the Vohwinkel terminus. The event attracted approximately 5,000 visitors. Figure 2 shows train 27 of the 72 series alongside the Kaiserwagen. The latter carried Kaiser Wilhelm II and his consort Auguste Viktoria on a pre-inaugural trip from Elberfeld to Vohwinkel on 24 October 1900. This is one of the 1900 series of 26 vehicles built for the inauguration of the line, which survived in regular service until the early-1970s. At this time the 1972 series, consisting of 28 three-section trains built by MAN, was put into service. Of these, 25 are still in service. The Kaiserwagen is now available for charter, and is popular for wedding receptions.

Dynamic testing was conducted in early-2016, with the first new vehicles entering service in June 2016 and deliveries continuing into 2017. Once the Generation 15 fleet is complete, the 25 MAN-built trains will be withdrawn.