ITS deployment in Bulgarian urban areas

In this article Christina Nikolova from the University of National and World Economy (UNWE) and Marta Klisurova from the Transport Research Institute, outline the requirements needed to develop and deploy Intelligent Transport Systems in Bulgarian cities and highlight that although progress has been made, there is still much to do. 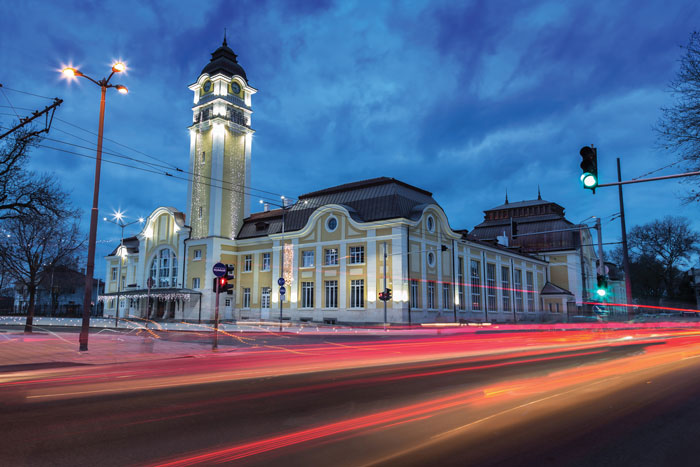 The deployment of ITS in Bulgaria is arranged by the ‘regulation’ on the conditions and the rules for the deployment of ITS in road transport and interfaces to the other modes (Official Journal, 2013). According to the provisions of this regulation, the Ministry of Transport, Information Technologies and Communications is responsible for the implementation of coordinated and consecutive measures for the deployment of ITS. The ITS Committee has been established in order to advise the Ministry on all aspects and activities for conducting the respective policy measures in the sphere of ITS. Currently the Ministry and Committee are working on the preparation of a Strategy and Action Plan for ITS deployment in road transport across the country.

The main priority areas defined for the deployment of ITS in Bulgaria are as follows:

Regardless of the established institutions, Bulgaria still has not developed a national ITS strategy and action plan.

The country has used the following two main instruments of EU co-financing for the implementation of ITS projects:

The first programme is managed by the Ministry of Transport, Information Technologies and Communications and deals with transport projects at national level. The main beneficiaries of the programme are the national administrations managing road, rail, port and airport infrastructure, as well as Sofia Metropolitan which is an entirely municipal company. The latter implemented most of the ITS projects in urban environments.

The second programme is managed by the Ministry of Regional Development and Public Works, as the interventions are targeted at urban areas. By utilising this tool a lot of projects, including for the deployment of ITS in urban areas aimed at sustainable development of urban mobility, have been implemented.

ITS deployment in urban areas 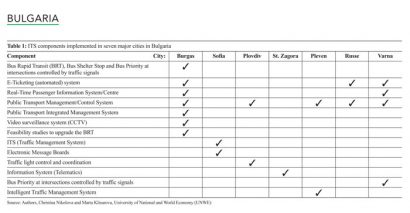 The first step of ITS deployment in urban areas was to implement ITS projects in seven major cities in Bulgaria – Burgas, Sofia, Plovdiv, Varna, Pleven, Stara Zagora and Rousse. These cities received 411.2 million BGN in grants (OPRD) for a number of public transport modernisation projects under the ‘Integrated Urban Transport’ umbrella. Project processing bega

n in October 2010 with the preparation of feasibility studies and was completed by the end of 2014. The main activities concentrated on the development and deployment of traffic management plans, automated management and control systems. By implementing these aspects the urban transport systems were
optimised, whilst improving the air quality and urban environment at the same time. Additionally, more effective, faster, greener and
generally more attractive mass urban public transport with lower energy consumption was achieved.

The project components related to ITS in each urban area are summarised in Table 1 and there is considerable diversity in the ITS components implemented in each city.
The main reasons for this include the following: 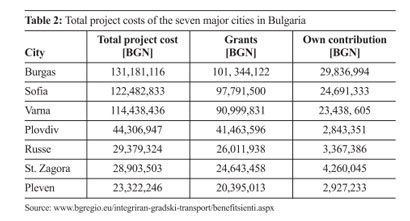 With regard to the total project costs for cities (shown in Table 2) it could be concluded that the highest amount of investment was in Burgas, followed by Sofia and Varna. It appears that project size is determined by the priorities of the municipality itself and its own capability to contribute.The analysis of the data shows that the contributions of three municipalities – implementing the largest projects – are 10 times greater than the others.

Aside from the total project costs it is necessary to take account of the ITS investments share as well (see Figure 1). In general, the investments in ITS components are between 7-16% of total budgets. Only in Plovdiv is the rate of investment significantly higher at 46.6%. This is an example of how, with limited own resources (compared to the first three cities), the municipality has taken its own decision to invest and develop ITS solutions and a Traffic Management System. 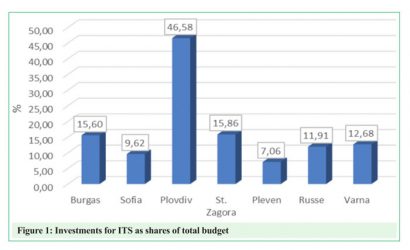 Besides the aforementioned projects, a good example of investing in urban transport under OPRD is the project for construction of Sofia’s
subway. The project is among the most successful, not only in Bulgaria, but within the EU. The total funding for it was €211,680,300 with EU funding contributing €157,414,700. Over 350,000 passengers use thesubway daily and it significantly increases the level and quality of public transport services. The latest technologies, systems and ITS solutions for urban railways management and operation were implemented in this project.

As aforementioned, the strategic and planning documents for the deployment of ITS systems have still not been enforced. However,
it should be noted that there are some (not yet well coordinated) positive results. Different documents enforced at regional and/or
municipal level, directly or indirectly aimed at ITS could be mentioned as first examples of establishing ITS legislative framework. Some of
them are as follows:

There are some urban mobility plans (BUMP/SUMP) in development for the following cities:

Perspectives for the development and upgrade of ITS systems in the country are related to the opportunities suggested by the operational
programmes for 2014-2020, and include the following:

Aside from the projects already implemented in the seven largest cities in the country, which are also expected to be upgraded (provided for investments exceeding 280 million BGN), new proposals for some other cities including Gabrovo, Dobrich, Pernik, Sliven, Vratsa, and Yambol have also been developed and submitted for evaluation. Estimated total investment under OPRD 2014-2020 foreseen for urban
environment and integrated urban transport are approximately 500 million BGN. If the same rate of ITS investments is to be main tained,
then at least 50 million BGN will be invested in the deployment of ITS in urban areas in the near future.

Despite recent progression, Bulgaria still lags behind in the implementation and use of ITS compared to other developed countries in
Europe. The evaluation of the results of the implemented projects is the most important issue to be addressed in order to clarify the real
contribution of ITS projects to the achievement of the policy goals. However, all the implementation and operational problems should be
considered. On the other hand, it is necessary to develop and enforce all the necessary national and regional strategic documents and plans for ITS deployment. In this respect it is essential to:

Christina Nikolova is an Associate Professor at the University of National and World Economy (UNWE) in Sofia. Her research expertise covers Economics of Transport, Sustainable Development and Intelligent Transport Systems. Christina has participated in several ITS deployment and development projects and has published many papers on the topic as well as speaking at the ITS World Congresses in Vienna (2012) and Tokyo (2013). Christina recently prepared a Cost-Benefit Analysis of the deployment of ITS in Bulgaria.

Marta Klisurova graduated from the University of Architecture, Civil Engineering and Geodesy in 2008. She has a Master’s degree in Intelligent Transport Systems from the University of National and World Economy (UNWE). Between 2007 and 2008 Marta was a Junior
Expert in investigation of roads and bridges at the Institute of Roads and Bridges. Marta has worked at the Transport Research Institute since 2008 and has participated in several projects on sustainable urban transport and ITS deployment for major Bulgarian cities.