Clark Right discusses fires on public service vehicles and suggests ways in which they can be contained safely. 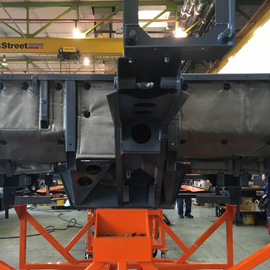 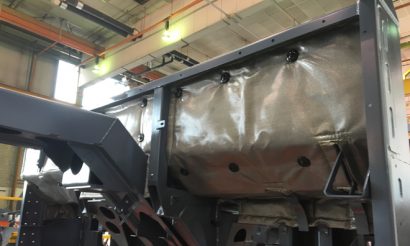 The tools to be a wannabe journalist are readily available, so people armed with an iphone or android device can report on a newsworthy item from anywhere in the world, which is how most fires on public service vehicles now reach the public domain, via facebook or YouTube.

Fire is a very common occurrence in public service vehicles. Although, and for some reason they are not reported as often as they occur.

Information received from the London Fire Brigade under the freedom of information act 2000 showed there were approximately 6.5 bus fires every month throughout 2014/2015 including and up to June 2016, almost all starting in the engine bay.

These statistics only refer to London, but if we consider the possibility of the same statistics occurring in every major city in the UK and Europe that are not reported…”Well, you do the math”!

There are systems in place to suppress a fire if one starts in the engine bay, but they all operate by mechanical mean’s, which immediately presents a problem if they are not maintained correctly. All mechanical systems are only as good as the people that fit and maintain them, and if, they are maintained, as they should be throughout the life of the vehicle there is also a substantial cost associated with it.

What does a passive system do once it’s fitted? Absolutely nothing until it has to!

There are no mechanical systems to fail, no component parts to replace when they break down, no vehicle off road scenarios and the costs associated with it, in fact, nothing to do once it’s fitted apart from a visual inspection when the vehicle is off the road for routine inspection and maintenance.

eQuilt, a British patented invention is one such product that has been exhaustively tested in several live vehicle tests and demonstrations and is completely passive.

eQuilt, like fire doors in a building is designed to stop fire spreading from the engine bay to the passenger compartment and the body of the vehicle – once this happens the vehicle is normally a total loss which happens within 3 to 4 minutes of a fire starting.

eQuilt has been likened to traditional engine bay insulation, but it is there where any, if at all, likeness ends. eQuilt is nominally a 19mm thick quilted material, but once a fire starts and reaches a specific temperature eQuilt will expand by up to 25 times its volume effectively pushing the fire away from the substrate it is protecting. eQuilt does not burn or contribute to a fire in any way, its component parts deny the fire one of the most important parts of the fire triangle, fuel. 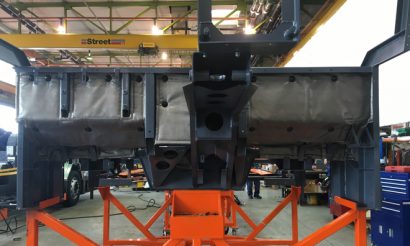 In March 2014 at the fire service college Morton-in- Marsh, eQuilt was put to a real-life test in front of over forty people from major Operators, bodybuilders, SMMT and Transport for London. It was fitted to the engine bay (The engine had been removed) of a vehicle and a fire, under controlled circumstances was started by igniting 3.5 litres of diesel which was floated on water in a large tray. Despite temperatures in excess of 800°c eQuilt contained the fire for over twenty minutes and prevented any further damage occurring to the rest of the vehicle.

In December 2015 another test was carried out at the fire service college, specifically for the Arriva Group, and attended by delegates from their UK and European operations. This time on a vehicle with an engine fitted and running. The injector pipe unions were, prior to the test, left open with the engine running to allow the engine bay to be flooded with diesel and then the fire was started with an extended propane lance. The result was remarkable; once all the combustible materials in the engine bay had burnt away, and again despite temperatures in excess of 800°c, the fire being denied any further fuel source by eQuilt, extinguished itself, leaving the rest of the vehicle completely intact.

The temperatures monitored by plate thermocouples fitted to the rear five way seat/bulkhead assembly inside the lower saloon during the 800°c plus fire never exceeded 35°c throughout the twenty-three minute test.

eQuilt has been designed to not only contain a fire, it also incorporates insulation and acoustic qualities second to none.

In an insulation test, eQuilt was fitted to a mock rear five way seat/bulkhead and placed in a furnace. The furnace was kept at a constant 110°c for several hours, replicating the temperature of an engine bay in use on a public service vehicle and the temperature measured by plate thermocouples on the non-fire side increased by only 4.5°c above ambient.

Depending on the particular customer requirements it can be laminated to suit individual needs whilst still maintaining its unique abilities. It has produced acoustic results that exceeded current materials by up to 3db.

With Euro 6 and now Euro 7 on the horizon, and with temperatures expected to rise in the engine bay due to the exhaust regeneration system, Arriva have decided to fit eQuilt to all new vehicles from 2017 to further safeguard their fleet in the event of fire.

The UK Engineering Director for Arriva Ian Tarran said. “The tests that have been done on both occasions have proved that you can keep a fire in the engine bay in excess of 15 minutes. Most places where we operate buses, you’d get a fire engine there in less than that time.

“When you’re paying £200,000-plus for a bus, but paying a modest amount for eQuilt – you’re investing that in the life of the vehicle – that makes sense to me.

“It’s added protection. It’s going to be cost-effective and maintenance free, and that’s what’s drawn me towards it.”