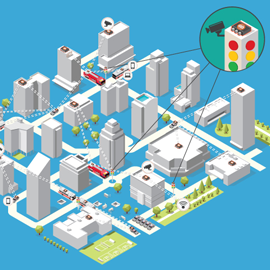 Designed for dynamic environments, this technology will propel the bus industry forward… 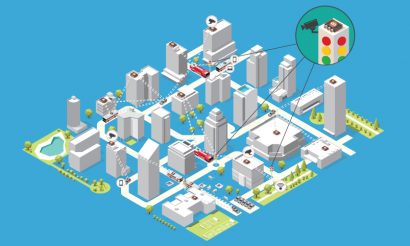 We are living in the age of ‘always on’. Billions of us are connected to the internet whenever and wherever we go, and have become accustomed to having internet cure our impatience, any time, any place. It is therefore no surprise that in major cities, passengers have become reliant on the apps that track when their public transport will arrive in real-time. Even though this technology is relatively new, it has become an expectation for many residents and thus a disappointment should the technology not be available to track their transport. Living in such a world where connectivity is seen as a fundamental necessity rather than luxury, mass transit has to fight to keep up with passengers’ increasing demands.

Historically, transportation agencies struggled to achieve an effective level of broadband reach and connectivity. All manner of communication issues were encountered, including interference, capacity and difficulty in offloading or backhauling data from vehicles.

Mass transit systems need quality background technologies to maintain the safe and seamless flow of people, advanced security and functionality of back-office systems. Future-proof capable technology is needed to ensure that systems and operations perform at the highest possible level in an industry where failure is just not an option.

Kinetic mesh private wireless networks offer a solution. They have the ability to wirelessly connect buses and other transportation vehicles and can keep equipment workers and passengers networked with real-time mobile access, ensuring that the operators are in control no matter where their assets and people travel.

Kinetic mesh networks are equipped with technology that makes them a “living network” where all nodes communicate with each other rather than relying on a single controller node to drive communication. Interacting with each other, the nodes provide mesh stability and flexibility regardless of the environment. These living networks are extremely adaptable and offer a distinct advantage over networks that restrict transmissions to transiting via controller nodes – a network which is vulnerable to downtime with a single point of potential failure.

Kinetic mesh networks developed as a result of 9/11 and the disastrous events that occurred, which included the failure of the communications infrastructure. Radio systems failed and first response efforts were hampered, ultimately costing lives due to an inability to communicate promptly.

Forward thinking officials know that having always-connected, high-capacity communications between personnel, vehicles, and command centres can mean the difference between life and death. With so much at stake, many government agencies are expanding their networks to more efficiently deliver voice, video, and data across their coverage areas – with global wireless broadband in the public safety market projected to grow from approximately £11.7 billion in 2014 to £17.3 billion by 2020, according to MarketsandMarkets.

Kinetic mesh plays a pivotal role in improving passenger and pedestrian safety, including keeping track of equipment. The network can aggregate data on-board buses and send it to the operations centre to analyse vehicle state-of-health and other equipment factors. Taking safety precautions a step further, the node on-board each vehicle can monitor situations and alert operators that a valve, seal or motor is overheating well before it does. This can promote a significant drop in catastrophic equipment failures.

Buses in a kinetic mesh network also can transmit information to other vehicles in the mass transit system, allowing them to function more efficiently and safely via wireless transmission of data between motor vehicles. For example, node sensors on buses can detect the presence of other vehicles in the melee that accompanies many big-city rush hour periods. In this way, they can help prevent crashes.

Furthermore, mesh networks can “police” mass transit vehicles by powering data-heavy applications that require the transfer of large files in real-time to monitor potential criminals. This provides the opportunity to thwart crimes and cut police investigation time, as law enforcements and emergency personnel can make use of the footage immediately. Also, kinetic mesh technology can be enabled to seamlessly capture and transition data, which promotes easier viewing of evidentiary data for crimes which have already been committed.

On the move – Make before break

Nodes provide mesh networks with flexibility and stable communications in even the most challenging mobile environments. In a kinetic mesh network, every node can be mobile, which provides every transportation asset that traverses or resides in the network with robust, high-bandwidth mobile connectivity. For buses, this means that command centres can instantly access the analytical insights from applications running on each bus – monitoring everything from their exact location to speed, fuel consumption, and traffic optimisation.

The flexibility and mobility of the living network is one reason why kinetic mesh networks thrive when applied to systems with moving parts, so to speak. They are already well-established in dynamic, rugged industries such as Military, Mining, and Oil & Gas. They also have demonstrated success when deployed on commercial freight trains and are a natural fit for their next venture – mass transit. Distance can present limitations in a mass transit system, but as long as each node can communicate with another node, the network will preserve its integrity. 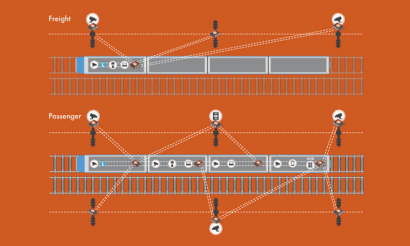 Kinetic mesh networks provide both linear functionality and vehicle-to-ground handoff, with a ‘make before break’ paradigm that ensures no loss in communication, even when travelling through remote signal areas. The network is capable of any-node to any-node communications, allowing it to work autonomously or interoperate readily with satellite, point-to-point wireless, or wired links.

It is estimated by Google that by 2020, the number of people with internet access around the world will rise to 5 billion. As demand surges for a connected world and public expectations on buses increases, kinetic mesh networks will be a perfect fit for an effective and productive mass transit industry. It satisfies the impatient in all of us, and will hopefully never again leave anyone wondering when their bus will finally arrive. 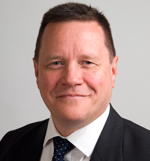 Chris Mason joined Rajant in June with responsibility for sales in Europe, Middle East and Africa. Working with distributors, resellers and end-users, Chris will seek to achieve further penetration of Rajant’s Kinetic Mesh technology into these key geographies.

With over 30 years ICT sales experience, Chris has worked for both small companies and in some of the largest global organisations finding IT solutions to business challenges. Over 16 years of this time was spent with British Telecom plc in a variety of sales, business development and management roles, across geographies and industry sectors.

Radio solution have been an integral part of Chris’ background, given his involvement with the UK’s TETRA network for the Emergency Services and the UK Ministry of Defence.

Prior to working for BT, Chris was responsible for worldwide 3rd party distribution for a leading Business Information organisation and has held various senior positions in the IT Industry, including some years working for Burroughs /Unisys.

Chris holds a BA (Hons) in English Literature followed by an MSc from University College London in Telecommunications Business and is a Member of the Institute of Directors.

Home for Chris is in the South West of the UK in a beautiful part of the country called the Somerset Levels.