Technology on the Tube: The technological innovations that make London Underground Work

Explore the surprising technology behind the London Underground and how it affects everyday commuting. 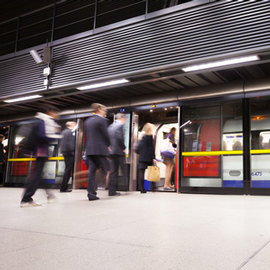 The oldest and one of the most famous rapid transit systems in the world, the London Underground (shortened affectionately as ‘The Tube’ to regular users), is a prime example of how technology and transport go hand-in-hand. The latest innovations such as Wi-Fi and developments in radio wave technology, work together to create an effective, customer-friendly transport system. 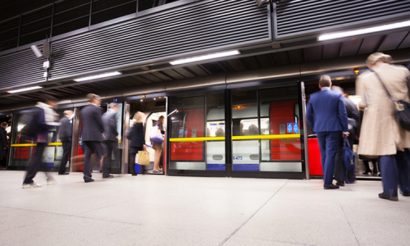 However, commuters often woefully disregard the technology that enables them to get to and from work on a daily basis. This is why Dice – formerly the IT Job Board investigated behind the scenes to the machinations of the Tube, from the surprisingly clever Oyster card systems to the newly integrated Wi-Fi on the underground.

Phil Young, the Head of Online at Transport for London (TFL) spoke about the importance of integrating technology with customer needs in mind, stating “We always look to put our customers and users at the centre of everything we do”.

In the digital age however, where keeping up to date with the latest transport information and news to plan one’s journey is the norm, Young also discussed the developments of apps and Wi-Fi to keep customers updated. He claimed,

“Millions of Londoners use apps powered by our free open data, alongside our website, to check the Tube, find a bus or see how the roads are running. In an age of digital innovation, the opportunities that are providing free open data can present are incredibly exciting and seemingly endless.”

How Does Oyster Card Work?

Oysters are presumed to be a card with a simple micro-chip, and indeed, when they were first launched in 2003, that is exactly what they were. Outfitted with a basic MIFARE microchip, the first generation of Oysters were essentially memory-storage devices that would keep a record of travel costs.

However, the very basic computational power of the devices meant that it left the cards exposed to various security risks: including cloning other people’s Oysters, as well as other ID cards, due to the fact that they all use the same MIFARE chip.

This high level of security risks meant that these chips were soon replaced with RFID (radio-frequency identification) technology powered by an electromagnetic field to share information between the card and the reader.

Now, the latest Oyster cards are essentially CPUs (albeit smaller and more basic than an actual desktop) that are capable of basic computing tasks, including storing files. Crucially however, they are capable of encrypting the data stored on the card, hence making them far more resilient to being hacked than the original generation of Oysters.

The card readers, in turn, transmit the travel information (including the money left on the card and a list of the stations previously travelled up to the past six months) to a general database and as each Oyster is outfitted with a unique number, customers can look up their travel records online in the case of being over or under-charged.

Escalators on the Underground

Over the past century, as modernity advanced and the underground network grew and deeper level tube lines were built, escalators became a necessary part of the Underground infrastructure to transport people between the levels in the stations.

For instance, some of the tube lines are built so deep underground that going up the stairs would be a massively strenuous task. For instance, the longest escalator at Angel, measures 60m with a vertical rise of 27.5m.

How do escalators work? 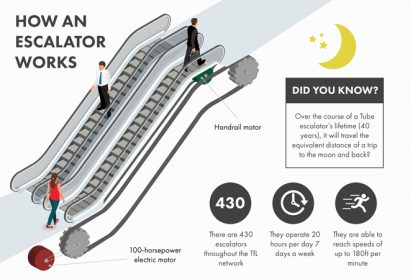 All escalators function by a pair of chains that are looped around two pairs of gears at the top and bottom, which are constantly in motion thanks to a 100 horsepower electric motor that drives the top parts. The handrail, essentially a rubber conveyor belt, is synchronised with the movements of the steps.

However, with the sheer volume of travellers that use these escalators, which amounts to millions a year; as well as working 20 hours a day for 7 days a week, means these machines have to be built with enough durability to withstand these demands. 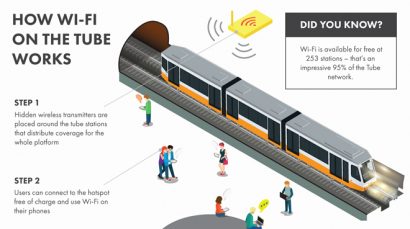 For years, one of the downsides of the Tube was the lack of connectivity: as the public became accustomed to ubiquitous online connectivity thanks to 3g phones and Wi-Fi hotspots, the subterranean Tube meant no radio waves could penetrate the ground, and thus, no connectivity.

That is, until the 2012 London Olympics meant a greater influx of people in the Tube with an increased demand for connectivity, to help the large influx of travellers get around and thus easing the inevitable congestion.

Now, wireless transmitters are placed around the tube stations at the ticket halls and platform which cover roughly 95% of the Tube networks. Most UK customers who have contracts with EE (Orange and T-Mobile), Three, and Vodafone have complementary access whilst those on any other network contracts can still have access by paying.

The number of people using the Tube, whilst already considerable, is seeing a pattern of exponential increase. For instance, 26.6 million trips were made on an average day in 2014. This was 2% higher than the previous year, and the figure jumps to an 8.2% increase when compared to 2008. At this rate, by 2041 there is a predicted 5.5 million further trips that will be made daily.

It is partially this strong yearly increase of passengers that shows London to be an ever-growing, economically successful city, and that TFL is primarily preoccupied with how to incorporate technology to accommodate these increasing demands on the system.

As technological developments occur (such as Wi-Fi), it will certainly be interesting to see how they are integrated with the existing systems.