Bike it or not, London’s cycle-scheme’s a winner 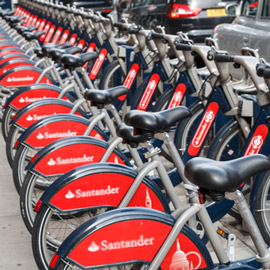 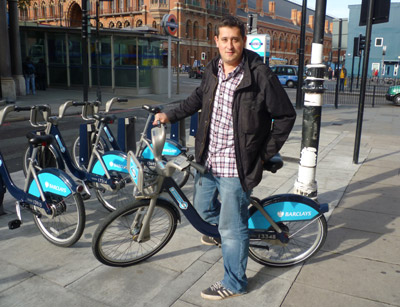 You never forget your first time. And, with London’s public cycle-hire scheme, I was an early-adopter: in fact, so early, I signed up before its 2010 launch.

Eager, but nervous, too. I hadn’t regularly mounted a bike since my late-teens and here I was – about 15 years later – preparing to take on traffic in one of the world’s biggest cities on a sturdy-looking unisex rent-a-bike.

What a buzz! I remember well those first few days. Here I was, cycling to work, taking on the London rush hour, what felt like free-of-charge! (kind of – more on this later). My workplace was near Lambeth Bridge (just along from the Houses of Parliament) and I recall cycling along Horseferry Road right past the Department for Transport. Civil servants whipped out their camera-phones and turned to colleagues: “Look, a city-bike!”. I felt like a pioneer! And also a little odd riding a bike at lunchtime in a suit.

“Six years on, I have renewed my membership annually and – enthusiasm undimmed – continue to use the bikes at every opportunity”

Six years on, I have renewed my membership annually and – enthusiasm undimmed – continue to use the bikes at every opportunity: to and from offices, and for meeting friends; east-to-west and west-to-east.

London’s bike scheme is, of course, popularly known as ‘Boris Bikes’/’Boris biking’ after the pro-cycling Mayor of London, whose term of office has just finished. It remains to be seen how long the Boris Bike sobriquet will endure under the new mayor.

The cost is a bargain. I pay £90 per year for my membership. Then every rental – so long as it takes 30 minutes or less (and most journeys within the bike zone should do) – is free. Only once, from memory, have I overshot the half-hour (by one minute – from Westminster to Old Street) and I noted a small extra charge on my monthly bank statement.

“The cost is a bargain. I pay £90 per year for my membership”

Frankly, even if the annual membership price quadrupled I’d still be ‘in’. The scheme was actually launched with annual membership of £45, which was bafflingly cheap. Presumably it was a trial/launch price to encourage people to give it a whirl.

The bikes themselves are fantastic: these three-gear tarmac tormentors need to withstand everything from being left out all night in all weathers to hooliganism, as well as probably careless use by their amateur temporary guardians. They even have front and rear LED lights, which start flashing soon after the bike is ridden.

I understand that the bikes (and docking stations) are built in Canada. This is disappointing. I find it curious that we couldn’t find a suitable British-based manufacturer and are instead spending public money overseas. I’m originally from Nottingham, the home of famous Raleigh!

Generally it’s easy enough to find a docking station with bikes ready or free spaces, and patterns seems to emerge during the day as to the kind of docking stations likely to be busy or almost empty. You kind of get to know the pattern. If the docking station if full you insert your key-fob to get an extra 15 minutes for free.

Sticking to the script

I probably find myself on the phone to the scheme’s call-centres about once every three months – usually to double-check whether I have docked a bike successfully (and that I won’t be charged for a non-return) or because my key-fob has ceased to function. Consistently I have found these call-centres excellent. For a start, and importantly, the operatives seem to be based in the London area (as opposed to elsewhere in the UK or indeed overseas), which generates immediate unspoken empathy (particularly useful when stood on the pavement wanting your problem sorted).

The only annoyance with the call-centres, and this is minor, is that their phone-answering script seems to include an early section where – after the initial security question – operatives are forced to ask: “Is it OK if I call you ‘Ian’?”. Are there really people (customers) who would demur if called ‘Mr Hall’? Surely not.

In respect of the key-fobs, I have found, over the years, that they seem to cease working after about six months: specifically, they become a little swollen/bent, and difficult to insert into the hole. If this happens you are sent a free replacement.

I do wonder how user-friendly the scheme is for non-members. On occasions when I have suggested to friends that they hire a bike (as casual users) they have either looked at me like I’m a lunatic or apparently made a sober assessment of the perceived hassle of typing in their bank-card number and receiving a paper-slip access code (etc.) and decided against. (I understand that casual users can now also borrow a bike via the official app and smartphone).

On a related note, it is rare to find docking stations in tourist-y locations at which a family of foreign tourists are not huddled round the instructions/payment pillar apparently in a confused state. The scheme is, naturally, a curiosity to city outsiders. More than once I have even agreed to pose for a tourist’s photo-op (I can only assume these photos are captioned, post-trip: ‘An Englishman with a bike.’)

“When I am in cities abroad I often take an interest in their similar schemes, some of which have drawn great praise. But I’ve never dared to have a go”

When I am in cities abroad I often take an interest in their similar schemes, some of which have drawn great praise. But I’ve never dared to have a go. In fact, I become like tourists visiting London – standing mouth agape as savvy locals hop on, and pedal casually away.

I’ve said all this, and I haven’t even yet mentioned other obvious personal benefits with city bikes. Firstly, if I’m on a bike I’m not taking up space on the Tube! A win for all. And then there’s the personal fitness/exercise benefits, although I sometimes question these as I’m stuck in traffic behind a belching exhaust-pipe. But clearly a few minutes’ cycling burns calories.

“London’s bike scheme has made me appreciate London more”

London’s bike scheme has made me appreciate London more. A keen urban geographer, I was always pretty good at knowing London’s layout as per the Tube map. But actually, of course, Harry Beck’s iconic cartography doesn’t mirror spatial realities (and, naturally, doesn’t take contours into account).

I hadn’t appreciated how, say, a cycle from central London to the City (and back) is relatively quick; but, in contrast, central London westwards to, say, Hammersmith (and back) is more of a slog. But certainly in respect of the relatively quick pace at which cycling is possible, I sometimes imagine that I’m racing (successfully) against a packed Tube train chugging along barely metres below me. 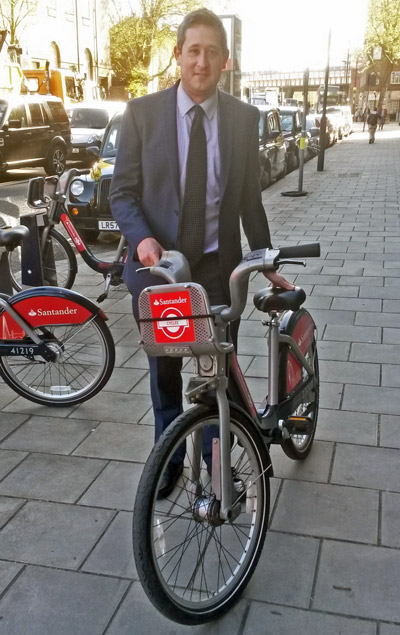 Ian Hall with Boris Bike in London, May 2016

Related to this, one needs to be patient – and pull over – when consulting the mobile-phone apps related to the scheme (the apps, some of which are better than others, let you know in pretty much real-time where nearby bikes/spaces are located).

Of course, with casual/recreational cycling, you’re kind of stuffed if it’s pouring with rain: I don’t carry waterproofs and if the heavens open I’ll resign myself to dusting off my Oyster card and taking the Tube. But over the years I’ve been surprised how few times the rain is heavy enough to cause me to steer clear of cycling.

As well as potentially addressing some of the points already made, I wonder how else the scheme could be improved?

Although docking stations have very recently (and very laudably) been installed in new locations, such as the Olympic Park, East London, I would like to see more docking points near central London’s main train stations/termini. While appreciating that land/space is often at a premium in such locations, I do think more could be done to encourage intermodality, for example at St Pancras, where the docking stations seem squirreled away down side-roads.

“I do think more could be done to encourage intermodality”

In respect of the bikes themselves, I can’t understand why they need a kick-stand (and why some people seem to deploy the stand when docking/after docking: the docking stations keep the bikes upright). Also, the bells – which are found on each bike – are often tricky to operate. I’ve never used the luggage-racks located on front of the handlebars, although I do see others using them.

Given the financial sums that Barclays lavish on sponsorships worldwide I was startled when the bank opted against continuing their association with the scheme. It seems to me to be self-evidently brilliant to have thousands of moving (eco-friendly!) advert-laden bikes ferrying people around the capital: a two-wheeled equivalent of thousands of people with ‘Golf Sale [big arrow]’ pavement placards.

Obviously this is an unsophisticated assessment, and the scheme presumably didn’t deliver what Barclays’ marketers would describe as ‘ROI’. But Spanish rival Santander gamely stepped in, even if their red branding doesn’t match Barclays’ corporate colour’s symmetry with London’s light-blue ‘Cycle Superhighways’. At least the red matches London’s buses.

Regardless of how long their Boris Bike nickname endures, one hopes London transport policy will continue to encourage and develop the scheme under the new mayor.