Sofia’s public transport was significantly developed in the years 2007-2013, with the introduction of extended metro lines, rolling stock and traffic management systems. Following the success of these changes, Metodi Avramov, Marketing Director of the Sofia Urban Mobility Centre, discusses how the Bulgarian capital city is now focusing on improving its public transport performance through the use of modern technology… 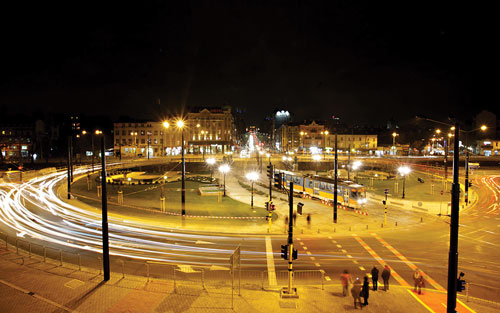 Public transport in Sofia has over 100 years of history, beginning in 1901 with 25 trams. Today, Sofia has the largest and most complex urban transport system in Bulgaria and is the only Bulgarian city with four modes of public transport – bus, tram, trolleybus and metro. The public transport performs over 1.3 million trips per day with more than 800 vehicles.

The creation of a sustainable integrated urban transport system is a long-lasting objective of the Sofia Municipality. The measures undertaken in recent years were implemented with EU, state and municipal funding. Financial support from the ‘Transport’, ‘Regional Development’ and ‘Environment’ Operational Programmes were used in the period 2007-2013 for the development of the metro system, for the supply of rolling stock, and for the introduction of an intelligent system for traffic management.

With the financial support of the ‘Transport’ Operational Programme, significant investments were made in metro construction. Currently two lines with a total length of 39km and 34 stations are in operation. The last two sections are 10km-long and seven stations were put into operation in the spring of 2015, including the connection to Sofia Airport. The last section of the 2nd line is under construction and will be operational in 2016.

By the end of 2015, with the financial support of the ‘Transport and Transport Infrastructure’ Operational Programme, the construction of the 3rd metro line will start; the project includes the construction of a depot and the delivery of rolling stock which is necessary for the operation of the line. The line will be 16km-long and it will provide a link with the ring road and Sofia-Pernik railway line. In 2019, 12km and 12 stations of the 3rd metro line will be in operation in Sofia.

What about the surface transport? The key priority for Sofia is the modernisation of its surface transport fleet; 226 new vehicles which meet modern environmental standards and provide comfortable and accessible services were delivered during the period 2011-2015. In 2011, a loan from the European Bank for Reconstruction and Development allowed 30 low-floor trolleybuses (supplied by Skoda) to be delivered. In 2014, with the financial support of ‘Regional Development’ Operational Programme and as a component of the Sofia Integrated Urban Transport Project, 50 articulated low-floor trolleybuses (supplied by Skoda) were delivered. In 2014, the ‘Environment’ Operational Programme provided financial support so that 126 articulated CNG buses (supplied by MAN) and 20 low-floor trams (supplied by PESA) were delivered. This was part of a project for the improvement of the air quality and under the same Operation Programme, 10 metro trains were also delivered.

Benefits of AVL and AFC

Moreover, an automated fare collection (AFC) system is in operation. All trams, trolleybuses and metro station gates are equipped with contactless readers. Since the AFC system has been in operation, more than 1,000,000 contactless smartcards have been issued. The implementation of an AFC system in buses is forthcoming and the system will allow flexible fares, real-time data and better control. As a result, the system will provide relevant data for the optimisation of the surface public transport network, with regards to the transport demand, changes in the transport infrastructure and the formation of new industrial and business zones as well as residential areas. The AVL and AFC systems will be further developed and also combined, to ensure flexible and cost-effective development of public transport by providing reliable, accurate, timely and comprehensive information on traffic related operations, as well as for the performance of operators based on the number of passengers and vehicle kilometres.

Also under implementation is an Intelligent Traffic Management System at 160 intersections. This system will give priority to public transport vehicles and will decrease travel time by optimising traffic flows and enabling them to be redirected.

Along with the construction of the 3rd metro line, the priorities for the Sofia Municipality in the next programming period 2014-2020, will be the creation of more efficient and faster public transport, building more accessible infrastructure and developing energy and environmentally efficient modes of urban transport.

Due to the implementation of the projects within the Operational Programmes 2007-2013, an acceptable percentage of new vehicles in the bus and trolleybus fleets was reached. However, the average age of trams remains relatively high, which requires us to focus our efforts and resources into continuing their replacement as the delivery of such rolling stock would operate on the reconstructed tramlines. The preparation for the purchase of five new trams has already started.

The ‘Integrated Urban Transport Project – phase 2’ under the ‘Regions in Growth’ Operational Programme 2014-2020 is also at its preparation stage. The project will focus on the reconstruction of tram lines, tram delivery and an upgrade of the real-time passenger information system. Approximately 16 trams will be delivered within the project. Currently, technical, economic and cost-benefit analysis is being performed, as well as surveys and passenger counting. Expected results from the project are:

The submission of the application form is expected in the first half of 2016.

Metodi Avramov is Marketing Director of the Sofia Urban Mobility Centre and has experience with projects financed through European programmes and International Financial Institutions. Metodi has a Corporate Management Master degree from the Technical University of Sofia. Over the past 10 years, he has been involved in Sofia’s public transport AFC system and worked as the Head of Economic Department and AFC at the Sofia Public Transport Company.