Posted: 17 December 2015 | Lukáš Kruml, Leader of the Investment Department at the Prague Public Transport Company | No comments yet

After years of planning and development, Line A of the Prague Metro network has been put into operation for passengers. Lukáš Kruml, Leader of the Investment Department at the Prague Public Transport Company, reveals the complicated construction schedule and the financial aspects of the Line A extension project… 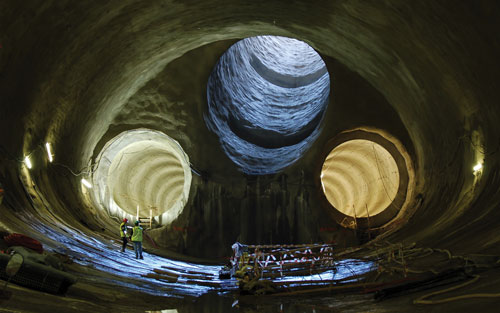 On 6 April 2015, after three years of preparation, four years of construction and 1/4 year for commissioning, passenger operations commenced on Line A (V.A section). The first work on the extension of Line A started in January 2010. After its trial operation without passengers, during which the complete technological systems both at stations and in connecting tunnels were tested, the opening of the stations followed. Also carried-out during this period were final inspections of the interior modifications of stations. The commissioning of the new section was preceded by the more than month-long replacement of the information system throughout Prague’s public transport system. All the stations of the new section, which measures 6,134km, are barrier-free.

By opening this section the overall transport network of the Prague Metro has grown to 65.2km and has a new total of 61 stations.

The history of the Line A

Construction of Metro Line A was initiated in 1973, and Table 1 on page 20 lists the dates on which the individual sections were progressively commissioned.

Description of the extension of V.A section

The operating section of the Metro V.A Line continues from the current terminal Dejvická station beneath Evropská Street; it rises westwards towards the foothills of the ridge comprising Cervený vrch and Hanspaulka. On Vokovice col it turns south and crosses Bílá Hora terrace with the promontory of Petriny from the north and leads under the southern slopes of the Motol valley. The maximum gradient of the line is 39.5 per mile and the minimum directional arc has a radius of 630m.

The technical solution of the route is by and large proposed to be shield-driven. The tunnels of the stations Bořislavka (Červený vrch), Nádraží Veleslavín and Petřiny were implemented using the New Austrian Tunnelling Method (the NATM). For the construction of the access tunnels, blasting was utilised instead. Single-track route tunnels were excavated using Tunnel Boring Machine (TBM) technology with the help of modern machines. The lining rings are made of reinforced concrete panels with infilling of their back-space. To a lesser extent, the NATM technology, together with blasting, was utilised for the excavation of two-track tunnels and of the passages between them. The Nemocnice Motol station was cut and covered, while the tunnels for the reversing tracks after Nemocnice Motol station were bored to a greater depth.

TBM shields were used for boring the tunnels from the BRE 1 site facility towards Dejvická Station and were pulled through the stations that had been pre-driven using the NATM. All stations, with the exception of Nemocnice Motol, are shield-driven. Bořislavka was designed with a single-nave and an island platform, while Nádraží Veleslavín has three naves with the central one being shortened. It also has an island platform, as does Petřiny Station that was also designed with a single-nave. Nemocnice Motol Station was excavated utilising the cut and cover method with a glazed arc ceiling and side platforms.

The design and engineering work on the project commenced early in 2007. In late-2008 the application for planning permission was filed, it was then issued in early-2009 and was then followed by a request for a building permit. This could not be obtained in its entirety and, given the need for the completion of the project in late-2014, it was decided to break down the application for the building permit, which subsequently caused complications during the construction.

The implementation of the construction part of the project began in early-2010, but this was followed in mid-2011 by a nine-month delay to the technological part of the project, that was caused by complications in regard to the tender for suppliers. The most demanding factor in regard to the project was coordinating the construction and the technological parts. In accordance with the progress of the project, the contracts for train control and for the stations’ transport systems for passengers (lifts and escalators) were concluded at the end of 2013. Following the conclusion of these contracts, the deadline for commissioning the V.A section for use with passengers was set for 6th April 2015. Key milestones of the construction process were checked in relation to the progress of the work, such as the completion of the NATM excavation of the individual stations, the completion of the TBM excavation, the completion of the superstructure, the handing over of the stations and the tunnels for the purpose of installing the necessary technology and the milestone comprising the installation of the train control system.

The commissioning for its use with passengers still had to be preceded by operational testing, by the acceptance of the work and, in particular, by putting the project into trial operation with passengers. This was facilitated by the Prague Public Transit Company and four months were allocated for this time-consuming process.

In 2008 the estimated construction costs, including a reserve for the project, amounted to CZK 18.7 billion (net of inflation). The project was divided into four parts, which were successively individually tendered in succession. The first, in 2009, was a contract that was concluded for the construction part, whereby the anticipated price of CZK 13 billion was reached in the tender. However, in the context of the actual implementation of the project, there was an increase of CZK 900 million in comparison with the original agreed price. This was specifically in relation to the encountering of adverse geological conditions, changes in regard to the progress of the construction and also due to the other requirements of the relevant government authorities, which also negatively affected the construction.

In 2010, a tender was announced for a supplier of the technology; in this case, however, the anticipated price of CZK 2.6 billion was not achieved and the tender price offered was CZK 700 million higher than the price that had originally been estimated. This was partly due to the introduction of both stricter fire regulations and increased safety requirements, which needed to be implemented within the scope of work required.

In 2013, the last two packages of work were tendered. A supplier of the train control system, in regard to which the originally estimated price of CZK 400 million was achieved and for a supplier of a transport system for passengers (lifts and escalators), for which savings of cca. CZK 160 million were achieved, in comparison with the originally estimated CZK 350 million.

The other costs were for covering the preparation of the project, including securing the property rights, and the reserves for the project, from which costs that were higher than was initially estimated were partially covered.

In the context of the changes to the project, the contractors demanded a total increase of CZK 2.5 billion, which, based on a rigorous scrutiny by the investor and by seeking savings to the total cost of construction of CZK 19.5 billion, was minimised. Currently, the financial closing of the entire project is underway, including the approval of the recent change sheets.

The project was financed from the following three sources:

Within the framework of the Operational Programme Transport (OPT), Priority Axis 5 ‘Modernisation and development of the Prague metro and the road traffic management systems in the City of Prague’ the European Commission approved a contribution of €287,724,562 (currently cca. CZK 7.9 billion) for the project of extending the Metro Line A. The total cost of the OPT project, in accordance with the application, amounts to CZK 18.4 billion (the price level in 2008). The City of Prague has undertaken the task to provide the remaining funds needed.

For financing this project the City of Prague has taken-out a CZK 11 billion credit line from the European Investment Bank (EIB), of which, currently, only CZK 8.5 billion has been drawn.

The remaining funds to cover the costs of this project will be paid in the form of a subsidy from the City of Prague.

Currently under intensive preparation is the construction of a new I.D line, also including a depot, from Depo Písnice to Náměstí Míru. This route will have 10 stations and will be 10.6km-long. The entire line is designed for the initial anticipated operation of three trains in automatic mode, with the eventual target being to operate five trains. The planning permit for this line has already been issued and the application for the building permit is under preparation. Construction is expected to commence in 2018.

Planned in the long-term is an extension of Line A from Nemocnice Motol Station1 to Václav Havel Airport Prague2. More likely, however, is that a high-speed rail from Nádraží Veleslavín Station3 to the airport will be constructed. Also being considered as a variant, is an extension via Řepy to Zličín Station4, where it would re-join Line B.

In the other direction there are plans to lead Line A from Strašnická Station in the direction of Nádraží Hostivař – section VI.A (four stations) – see Figure 2 on page 00.

Lukáš Kruml has been leading the Investment Department within the Prague Public Transport Company since 2009, responsible for the mechanical and civil departments, and has working experience from the public and private sector. His major abroad transportation project was as Member of the Formation Team for the Heathrow Airport Terminal 5 construction.

By Lukáš Kruml, Leader of the Investment Department at the Prague Public Transport Company