SwissPass: the first step on the path to e-ticketing

With the recent nationwide launch of the SwissPass travelcard, Ueli Stückelberger, Director of the Swiss Association of Public Transport, gives comment on how he believes this “evolution” in public transport is the first step towards barrier-free travel… 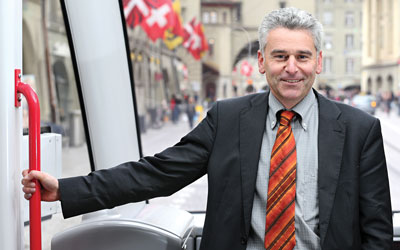 And since 1 August 2015, this network has grown a little closer together with the nationwide launch of the electronic ticket – SwissPass. The SwissPass is the key to simple, customer-friendly and future-oriented access to public transport – in the city, the suburbs and the adjoining rural areas.

To begin with, the card will carry details of the GA and Half-Fare travelcards – almost half the population of Switzerland have one of these two travelcards. Additional services can be used on request, for example Mobility Car-Sharing, PubliBike in the larger Swiss cities and ski passes in many Swiss ski destinations. From 2016, these will be joined by the first travelcards for the city/urban transport networks as well as other tickets and partner offers. In short, with the SwissPass, ‘S-Bahn Switzerland’ has established a uniform control standard encompassing 240 independent transport companies in the public transport sector; something which we are proud of as an industry.

The new red plastic card will replace the familiar, decades-old GA and Half-Fare travelcards for all customers, who will gradually receive their travelcards automatically on the SwissPass. In simple terms, it is a chip card using the proven RFID technology, already successfully in use in ski regions. In the medium-term, some three million travellers are expected to travel using the SwissPass.

Much was written in Switzerland about the SwissPass in the months leading up to its launch – it gained a lot of interest among people. Ultimately however, the SwissPass is an evolution, not a revolution – a first step on the path to electronic e-ticketing and a first step towards a system tailored to Switzerland. I am convinced that the SwissPass brings what has long been under discussion in the public transport sector; the first steps towards barrier-free travel.

All that is printed on the SwissPass is the customer’s photo, name, date of birth and an impersonal identification number. At ticket checks, the RFID chip allows the type of travelcard bought by the passenger to be displayed on the ticket inspector’s reader. This information is stored in a database.

The public transport industry attaches great importance to data protection; no personal data or services are stored on the chip. No-one can pinpoint the SwissPass and its owner or create a movement profile with the SwissPass. When a SwissPass is checked, all that is created is a ‘snapshot’, that is to say a control data record. No-one knows where the customer concerned got on or subsequently got off.

On the new SwissPass online portal1, customers can access their data at any time, check the validity of their travelcard and see which partner services have been activated.

Currently, around 60% of customers extend their GA or Half-Fare travelcards seamlessly – i.e. without leaving a gap between the expiry date and the renewal date. With the launch of the SwissPass, the travelcards are automatically renewed, unless explicitly terminated by the customer. However, before the travelcard is automatically extended, customers are given clear written notification of the possible cancellation date. It can be cancelled at the ticket office, by post, online or by telephone.

Approximately 50,000 new SwissPasses are activated every week and initial experience and feedback from travellers, ticket inspectors and transport operators show that the switchover has gone well and that people in the cities, suburbs and rural areas of Switzerland are experiencing no problems with this evolution in public transport. With almost two million passengers a day, the ‘S-Bahn Switzerland’ has successfully mastered the first step on the way to e-ticketing.