Platform Screen Doors (PSDs) offer many advantages to rail and metro operators including increased safety, comfort for passengers, and added aesthetic appeal. This is why they are increasingly being ordered by transport operators across the world.

The most obvious benefit is that PSDs act as a physical barrier preventing people or objects from falling or trespassing onto the tracks. This helps prevent suicides, reduces the risk of accidents (especially when trains pass though the station at speed) and stops people entering tunnels. 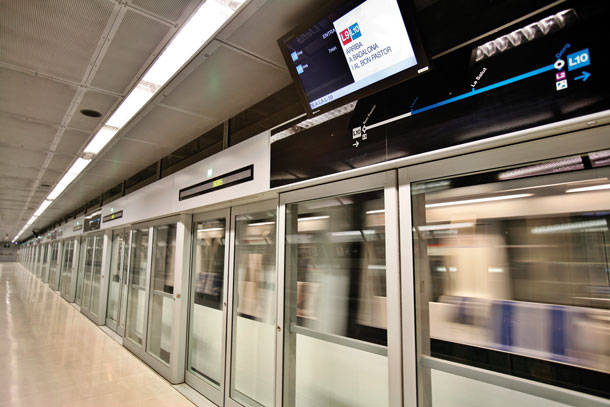 The most obvious benefit is that PSDs act as a physical barrier preventing people or objects from falling or trespassing onto the tracks. This helps prevent suicides, reduces the risk of accidents (especially when trains pass though the station at speed) and stops people entering tunnels.

PSDs also improve climate control within the station. According to Faiveley Transport, a global PSD manufacturer, the savings obtained through improved energy efficiency and cuts in heating and air-conditioning costs “can match the costs of installing doors themselves”. In addition, PSDs can also offer protection from the weather when used in the open air.

There are three main types of PSDs:

Following an internal feasibility study in 2003, RATP decided to equip all of the stations on the Parisian Métro with half-height platform screen doors by 2018. Thereby, it aims to improve passenger safety and increase the transportation capacity of the Métro lines. This will make Paris’s Métro system more attractive and comfortable for guests.

Following an evaluation of pilot equipment installed in March 2006 by three suppliers, Kaba Gilgen was chosen for this prestigious project. The half-height platform screen doors separate the platform from the rails. Their installation will allow trains to arrive and leave at greater speed and reduce the time it takes to pick up and drop off passengers. This will allow a significantly greater frequency of trains. The half-height platform screen doors also fit in very well with the historic architectural environment of one of Europe’s oldest underground railways. To ensure that Parisian Métro still runs smoothly during the work, Kaba Gilgen will only be installing the doors during the night for periods of no more than three hours at a time.

Following the successful completion of major projects in New York and Hong Kong, and the projects currently running in Kaoshiung, Taipei, Shanghai and Beijing, this new order gives Kaba Gilgen a foothold in Europe, too.

Kaba Gilgen believes that, in general, there is a great need for modernisation across Europe’s existing metro transport systems. In Paris alone, 11 further metro lines and more than 200 stations are scheduled for modernisation by 2018. Cities such as Madrid, Barcelona, London, Moscow, Istanbul, Milan and Rome will also gradually be modernising their metros in the years to come.

Another company enjoying international success is Westinghouse Platform Screen Doors (WPSD). The company is a specialist division of Knorr-Bremse Rail Systems (UK) Limited and in turn part of the Knorr-Bremse Rail Group. WPSD holds the unique status of Knorr-Bremse ‘Centre of Competence’ (COC) with world-wide responsibility within the Group for platform screen system design and technological expertise.

WPSD operates from two major sites, its new build facility in Wiltshire, England which was opened in 2005 at a cost of over £10 million and at an existing site in Guangzhou, China (WPSD (Guangzhou) Limited), which became fully operational at the beginning of 2006.

WPSD continue to develop new and exciting platform screen door technology. Their new half height Platform Safety Gate (PSG) system is now fully operational at overground platforms on the Guangzhou Metro. This successful PSG product has been further enhanced with the recent launch of Media Wall. This development sees high definition screens mounted on each side of the door openings which can display advertising or passenger information or a mixture of both. With Media Wall sound and even security cameras can be specified along with the screens. The media can come from a variety of feeds and can be updated in real time.

The company has most recently announced multi-million pound contracts for its platform screen door systems in the United Arab Emirates (Dubai Metro) and Italy (Brescia Metro).

The Dubai contract is the largest single order ever awarded to WPSD and is for the first platform screen door system ever to be installed in the Middle East. The contract, awarded by Mitsubishi Heavy Industries (MHI) who are heading the consortium of mainly Japanese companies creating the metro, is for the design, manufacture, installation and commissioning of over one thousand, one hundred platform screen doorway sets for the new metro system.

When it becomes fully operational on 9 September 2009, the Dubai Metro system will truly be state-of-the-art and will feature elevated sections, air-conditioned platforms, (made possible by the use of the platform screen door system) and fully automated driverless trains.

Brescia Metro is another exciting new build metro project and also a major, multi million Euro contract won by WPSD. The contract, awarded by Italian group, Ansaldo, is for 204 doorways at 34 platforms on 17 stations on the new build metro platforms. Provisional acceptance of the system by Ansaldo is due to take place in February 2011.

2 responses to “Platform Screen Doors: No barrier to success”