Keolis building on success in Bordeaux

For Intelligent Transport, Frédéric Baverez, Keolis France’s CEO, explains that in order to meet growing passenger demands in the city of Bordeaux, France, the operator is working with a clear focus to help further develop the city’s public transport network… 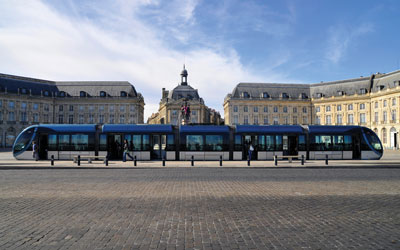 In 2009, Bordeaux first contracted Keolis to operate the Bordeaux public transport system. At that time, Bordeaux set a clear objective: rebalance the ridership between the trams and buses. Trams were the popular choice for most riders while buses were under-utilised and suffered from a bad image. Over the course of the contract, Keolis took significant and meaningful action to restore the attractiveness of the bus network. Without any additional vehicles, the ridership increased by 35% in five years and the global usage of the network was re-balanced. Within the same timeframe, Keolis successfully launched the ‘VCub’ – a new bike self-service scheme, and boat shuttles on the Garonne River, giving the network an outstanding multimodal dimension.

When the Bordeaux Metropolitan Council (BMC) unanimously voted in October 2014 to renew Keolis’ contract to operate the city’s public transport network for another eight years, we knew we had to continue to innovate and deliver a high quality performance to successfully implement the Metropolitan council’s public transport project. We now have a clear directive to further develop the share of public transport in Bordeaux and meet the demands of a fast growing city.

This new contract presents many high-level challenges. It has prompted the right questions needed to ensure delivery of the best of Keolis’ expertise and know-how in order to maintain the local authority’s trust and pursue the partnership begun in 2009.

The contract, which started on 1 January 2015, is expected to generate €1.7 billion in revenue over eight years. During this period, Keolis has committed to increase passenger numbers by 34% (compared to 2014) and passenger revenues by 52% while the kilometric offer will only increase by 7%, mainly through extension of tram lines. Additionally, Keolis will invest €54 million in the network.

Between 2009 and 2013, public transport ridership increased by 35.5% to 122.3 million passengers annually. This is credited to the increase in transport availability (tram and bus) made possible by BMC’s and Keolis’ actions and a strong marketing policy. During the same period, revenue increased by 41% due to the city’s population growth and a concerted effort to reduce fare evasion. In 2013 the system also received a 91% customer satisfaction rate.

The demand for public transport will continue to grow with the development of the Bordeaux area. The metropolitan region has a population of approximately 730,000 inhabitants and is set to reach one million by 2030. The number of trips per resident per year is expected to reach 224 in 2022 compared with 160 in 2012 – a 40% increase. This performance places Greater Bordeaux among the leading French cities.

To keep up, beginning in March 2011 and continuing over the next 10 years, Bordeaux is extending its tram network by 34km and making significant improvements to the tram, bus and intermodal networks.

Keolis has developed several approaches to make sure it meets its commitment under the terms of the contract while the Bordeaux Metropolitan Council is enhancing the network.

On the tram lines, the challenge will be to maintain a 10-minute departure frequency from the tramway termini while increasing tram capacity in the city centre with additional services during peak hours.

Keolis’ approach will be to run ‘sub-routes’ to absorb the load in the city centre. It will also create switchbacks so trams can return to service certain sections with a heavy passenger load. Also to be recruited will be 187 new employees. This includes 120 drivers, operations supervisors and agents for the building division, fixed facilities, industrial systems, passenger information and rolling stock.

Our plan for tram sub-routes is the first of its kind and was one of the leading reasons for the Bordeaux Metropolitan Council to choose Keolis. Initially, the BMC planned to make major investments by purchasing new rolling stock to better service heavy traffic areas. Keolis, however, developed an alternative plan leveraging sophisticated scheduling, signalling, and resource planning that was more effective and less costly.

In our scheme, trams operate on a headway regime, not on a timetable (except early morning and late at night). The headway regime is not uniform across the lines, but is adapted based on density. For instance, in the city centre, where demand is high, trams run with headway of 3 minutes 20 seconds whereas at the ends of the lines, where demand is lower, the trams operate at a 10 minutes frequency. In the intermediate sections, a tram runs every 6 minutes. This plan ensures that there is an appropriate level of service along the entire line keeping customer satisfaction high and the BMC’s rolling stock purchases low.

To be successful, our plan had to overcome several challenges that had impacts on safety, service, and personnel. For instance, it was critical that the new frequency schedules did not negatively impact car traffic creating gridlock. Therefore, at traffic lights where two trams intersect, the timing of the light changes has to account for both the tram priority while also allocating appropriate time for cars to cross the intersection. Developing the right solution to manage both safety and traffic flow was a top priority for Keolis.

Regarding employees, Keolis’ managers had to ensure that drivers’ schedules still included necessary physiological break time while at the same time never having a service disruption due to lack of available drivers. In order to manage this properly, the responsibilities for managing tram headway and service are managed by one team, traffic controllers, while the personnel and drivers rosters are managed by another team. By dividing the work, the system is more efficient as each team specialises in its own domain. Plus, extra drivers and spare trams are ready to jump into service as needed. This streamlined system ensures that vehicles are on the road in sufficient numbers across all routes and operating on time.

Keolis’ approach to the bus network is to continue to make it an attractive option. The new network launched in 2010 was a big success and led to a 35% growth in ridership, but this momentum must be maintained. On lines with a high level of service, called Lianes, traffic continues to grow by 10% each year.

To achieve these results, we have used an in-house methodology called ‘Keoscopie’ to study travel patterns and changes in way of life. In Bordeaux, some 10,000 people participated in the survey and 25,000 observations were taken. The results showed that travel patterns had changed significantly in the last decades. But the transport network still operated as though everyone worked traditional hours, providing most services at traditional morning and evening peak hours.

We also analysed the strengths and weaknesses of the network. Based on these results, recommendations were presented to the PTA, elected officials and residents during a six-month public consultation process.

As a result, the bus service was re-designed to offer more frequent service and expanded hours.

Bordeaux’s self-service bicycle hire system, VCub, is a huge success. On average, every bike is used seven times a day. At some busy interchanges, this can go up to 14 pick-ups/drops a day. The service’s popularity is supported by unique digital tools that provide users with real-time information so that they can see which stations are empty and where to pick up their bikes. Users are also encouraged to rebalance the bike network: if a customer docks a bike in an empty station, which they can locate via the VCub application, then they receive incentives in the form of free time.

Again, the objective is to maintain momentum and continue to grow the market share of cycling within Bordeaux. In order to support continued growth, we plan to create 41 new VCub stations over eight years. These new stations correspond with new facilities or the extension of existing stations at a ratio of two new stations to every tram extension. The locations have been reviewed to improve revenue and to provide a natural rebalancing of self-service bicycle returns.

As Keolis looks to the future, we continuously investigate new opportunities to further enhance the public transport offering in Bordeaux so that it evolves with the rhythm of life and the needs of the citizens of Bordeaux as well as visitors. Developing new digital tools, adapting and expanding services, and utilising intelligent methodologies to manage personnel and vehicles are the key elements which Keolis will use to stay one step ahead of the growing Bordeaux population and its increasing demand for public transport.

Frédéric Baverez is a graduate of the Mines School of Engineering in Paris. From 1988 to 1991 he worked for the Alsace region’s prefect, and then from 1991 to 1995 was Rapporteur to the Inter-Ministerial Committee for Industrial Restructuring (CIRI) at the French Ministry of Finance. After two years as Technical Adviser to the Cabinet of the French Transport Minister, in 1997 he was appointed Chairman and CEO of SITA IDF, a waste management company. He was then named Deputy Managing Director of Suez Environnement, and then Director of Cost Management and Procurement for the entire Suez Group. In 2005, he became Senior Vice President of Keolis France in charge of Operations, Projects and Innovation. In 2008, he became Senior Vice President in charge of Eastern France. In 2011, he was appointed CEO of EFFIA. As of 1 January 2014, Frédéric Baverez was appointed CEO France in addition to his role as CEO of EFFIA.