The North East of England is the first region in the UK outside London to offer passengers a multi-modal ‘Pay As You Go’ smartcard which can be used across bus, Metro and local ferry services. Hundreds of passengers are now taking part in a ‘Beta Test’ of stored travel rights carried on the ‘Pop’ smartcard brand developed through the North East Smart Ticketing Initiative (NESTI) – a partnership of local authorities and transport operators. Tobyn Hughes – Managing Director of Nexus which has led delivery of the NESTI programme – explains that the number of passengers using Pop for Pay As You Go journeys will grow rapidly as the test is expanded into full commercial availability during autumn 2015… 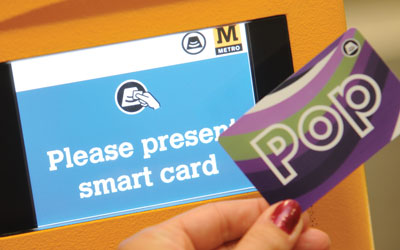 The launch of multi-modal travel in the North East makes Pop, and the NESTI programme that sits behind it, a potential model for a much wider area of northern England, as the government demands to see firm proposals for a ‘Northern Oyster’ by spring 2016. Nexus has overcome the challenges of working in partnership across 12 local authority areas and multiple bus and rail operators, big and small, in an unregulated environment. The result is a single Pay As You Go (PAYG) functionality that means a single card can be used to travel from Berwick on the Scottish border to Middlesbrough and Redcar on the Yorkshire coast – an area of several thousand square miles with a population of more than two million people.

Every bus in North East England has ticket machines equipped to read the Pop card (and already process all ENCTS concessionary travel transactions via their smart reader). So far, about 30 bus routes accept Pop as standard with further expansion coming soon as bus companies train drivers in use of the card. The Tyne and Wear Metro – the busiest light-rail system outside London with 38 million passenger journeys a year – also accepts Pop as standard, as does the Nexus-operated Shields Ferry across the Tyne. Pop meets the challenge to be a ‘Northern Oyster’ and exceeds the functionality of the London smartcard in a number of key respects.

Metro passengers can top-up cash balances online and upload to their card from any of Metro’s 60 stations, without having to nominate a collection point in advance. While users are advised to do this overnight, the fastest test transaction recorded took just 23 minutes end-to-end, from online purchase to collection.

Pop card users enjoy a daily price cap for travel on Metro, although this is not the case on bus services, where different operators in the unregulated market charge different fares, and passengers must ask the driver for a single or return ticket the price of which is then deducted from the card.

The North East Combined Authority, which Nexus works for, is in the process of introducing a franchise for bus services in and around Newcastle and Sunderland – the urban heart of the region.

This will pave the way for a single universal price structure supporting the Pop card, truly meeting the aspirations of business leaders and the findings of studies by Lord Adonis and others into regional competitiveness, which considers smart travel as key to economic growth.

The NESTI programme has, in the meantime, left open the option for any operator to move its own smart brand onto the single universal platform it has created, indicated by the ‘double smile’ logo on the corner of every compatible card.

By joining the platform a bus company can offer its customers its own products on its own branded card, while allowing them to use the same card to buy a wider range of tickets from other operators.

While none have yet done so, Newcastle University is one major institution to join the North East’s transport revolution – the university’s ID cards double as travel cards, allowing thousands of students to use them to buy and make discounted journeys on Metro.

The system and the HOPs behind it are also fully compliant with the government’s ITSO standard. As part of development, Nexus specialists have made test purchases from ticket machines – buying Metrosaver season tickets directly onto smartcards such as Liverpool’s Walrus.

There is no question that passengers have an enormous appetite for smart ticketing and the benefit it brings them.

Almost 30,000 passengers on the Tyne and Wear Metro already use a variant of the Pop card for season ticket travel – buying online to pick up the next day or renewing at station ticket machines or Payzone outlets in local high streets.

We believe the market for PAYG will be equally significant – and early feedback from customers demonstrates this. Nexus has already had requests for Pop cards from as far afield as California, from people who come to North East England regularly but infrequently and want the convenience of immediate travel when they land at Newcastle International Airport and step onto the Metro system.

Our small number of PAYG ‘beta testers’ have been quick to ask why certain bus routes and operators are not among the services they can use – an issue that will surely be fixed as bus companies understand customer demand for a product they already have the technology to offer.

All this suggests that Pop is on the verge of transforming the public transport market in the North East, with implications for a much wider swathe of the UK.

ITSO is the UK Government mandated open specification for interoperable smart ticketing. The need for ITSO compliance was something that Nexus wanted to deliver at the outset, with new hardware to facilitate ticket validation and access control as well as ITSO back-office systems being required. A total of 13 key stations were earmarked for automatic ticket gates, with the remaining 47 stations to get smartcard validators. The German-owned global solutions provider Scheidt & Bachmann (S&B) won the contract to supply the technology together with Ecebs, who provided the ITSO compliant back-office, card management and online ticketing solutions. The contract commenced in 2009 and was for the design, supply, installation, commissioning and bringing into service of a complete AFC system.

We have overcome many technical obstacles to reach this point. A scheme of this size can face a number of challenges. However, previous experience with deployments of this kind meant that a planned, phased approach was taken. The introduction of Paragon software integrated with other suppliers’ technology platforms required detailed defining and running of integration tests early on to mitigate any potential risks to the project. The integration and overall deployment has been successfully completed with an ongoing managed service being provided by Ecebs.

The foundation laid by these building blocks has meant this challenging and complex transition from ‘paper to smart’ has positioned Nexus as a leading example of what can be achieved with vision, determination and the right technology partners.

Tobyn Hughes is the Managing Director of Nexus – the public body which delivers public transport services on behalf of the North East Combined Authority. Tobyn joined Nexus in 2007 as Head of Strategy from a senior role at British Airways, later becoming Director of Customer Services and then Deputy Director General in 2013. Over the last seven years, Tobyn has led customer focussed teams delivering services to 37 million Metro passengers a year, taken Tyne and Wear’s first ITSO compliant smartcard, the Pop card, from its creation to its wide-scale implementation, and developed a bus strategy that has the potential to transform the way bus services are managed in Tyne and Wear. Tobyn became the Managing Director of Nexus at the beginning of January 2015.