The case for investment in London’s bus network

Posted: 6 May 2015 | Mike Weston, Transport for London’s Director of Buses

Buses are not just an iconic symbol of London; they are its most popular form of public transport. More than 2.4 billion bus journeys are made each year, meaning half of all bus journeys made in England take place in the Capital. As Transport for London’s Director of Buses Mike Weston explains, London’s population is growing faster than any other European city and investment in the city bus network is incredibly vital to keep pace… 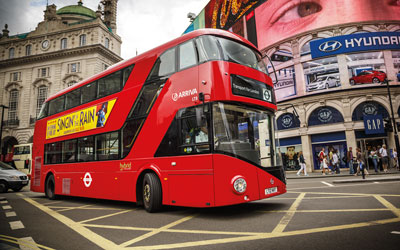 Buses open up every corner of the city, supporting London’s role as the engine-room of the UK economy. As the only public transport service operating throughout the entire city, bus users reflect London’s diversity and the network’s position as a system for everyone – they are the most flexible form of public transport.

In addition, the Capital’s buses are getting greener, with around 1,300 diesel-electric hybrid buses currently in passenger service with this figure set to exceed 1,700 by 2016.

We currently have eight electric buses in our fleet. This number will increase to 15 towards the end of 2015 with the launch of the Capital’s first all-electric bus route – the 312 running between Norwood Junction and South Croydon – that will operate with Optare MetroCity singledeck buses. Passengers on the route will experience much lower noise and vibration levels compared to diesel vehicles, with the bus operating company benefiting from lower maintenance and running costs. By 2020 more than 300 pure electric buses will be in passenger service across the Capital.

The trialling of electric buses paves the way for the Ultra Low Emission Zone (ULEZ) in central London in 2020, which will require all of Transport for London’s (TfL’s) single-deck buses operating in this area to be zero emission at point of use and all double-deck buses to be hybrid. Zero emission hydrogen buses already operate in central London and we have completed the retrofitting of more than 1,000 of the oldest buses in the fleet with enhanced exhaust systems (Selective Catalytic Reduction) that reduce nitrogen oxide emissions by up to 88%. This retrofit programme is continuing with a further 800 buses in the fleet being fitted with this equipment. In addition, we will trial range extending hybrid buses during 2016 that utilise inductive charging technology and have also accelerated the introduction of ultra-low emission Euro VI buses with more than 500 now in service.

There are now more than 400 New Routemaster buses operating across 11 bus routes. These buses are the first in more than 50 years to be designed specifically for the Capital and utilise the latest hybrid technology – delivering reduced emissions and a significantly improved passenger experience. All New Routemaster buses now entering passenger service are fitted with the latest Euro VI engines and by May 2016, 800 of these cutting-edge vehicles will serve the city.

Our arrivals boards at more than 2,500 bus stops and numerous apps powered by our data let customers know when their next bus is due. In 2014, cash fares were removed from the Capital’s bus network so passengers must now use a pre-paid ticket or contactless card, which means Londoners and visitors to the city experience a quicker and more efficient bus service. And audio-visual technology on all of our 8,600 buses helps people navigate their journeys around London. We are also trialling innovative technology that utilises CCTV cameras in the bus to tell passengers downstairs whether there are seats available on the top deck. We hope this will reduce crowding on the lower-deck at the busiest times.

We benchmark our bus network on performance and cost against 13 other large cities across the world including Paris, New York and Barcelona. This benchmarking shows that London has the second lowest subsidy requirement of the group and with bus network operating costs decreasing since 2006, London is now the third lowest compared to these other cities.

Our commitment to Londoners is that we will continue to innovate and improve the network to maintain a world class service.

In 2007, we published a document about our achievements so far. In its Foreword, the then Mayor said London was expected to grow to 8.3 million people by 2025. We surpassed that in 2011 and, this year, London’s population has exceeded 8.6 million – the largest it has ever been – and bigger than its previous peak in 1939. It will reach nine million by the end of the decade and 10 million by 2030.

This growth is faster than any other European city and investment is absolutely essential if we are to keep pace. Our bus network simply cannot be allowed to stand still because of the damage it would do to jobs, growth and the economy.

Since TfL was formed in 2000 we have invested strongly in London’s bus network – resulting in a 69% increase in passenger numbers. In recognition of the continued need to invest in bus services – with an increase in demand from the city’s rapidly growing population – TfL’s latest Business Plan has dedicated around £500 million to improve the network over the period from 2015/16 to 2020/21. This will include funding for over 500 extra buses, which will create capacity for an extra 2.9 million customer journeys each week.

The extra buses will be used to increase the frequency of bus services and improve transport connections to key growth areas, such as Barking Riverside and Elephant and Castle, providing high quality bus routes between new residential areas and local town centres. The investment will improve access to this vital form of transport across the Capital, especially in outer London where around four-fifths of bus journeys take place.

There is also an additional £200 million, which will be invested in supporting the reliability of the bus network at a local level with bus priority schemes that will be delivered in partnership with local councils. These measures will deliver significant benefits to passengers – allowing buses to move around the city more freely, avoid traffic hotspots and offer customers an even more reliable service. Improvements will include extra bus lanes, ‘bus only’ turns, and the extension of bus lane operational hours. Around 80% of London’s bus services run on borough roads, so close collaboration is essential to the development of such schemes, many of which could be introduced without major infrastructure works. TfL is now working with local London councils to help them propose, develop and introduce such schemes on local roads.

As well as investment in physical measures, the Mayor and TfL will also be investing £25 million over seven years in extra customer service training for bus company staff. This will include a review of the BTEC qualification – the mandatory training programme for new bus drivers – to enable TfL to improve the customer care training of around 25,000 staff including new and existing drivers, supervisors and controllers. Drivers will learn how to communicate better with customers and respond more quickly to their needs.

But there are major challenges here. Bus demand in London has increased by more than 10 times the amount that has been seen in the rest of England since 2004/05. Reductions in our revenue grant funding is placing enormous pressure on our ability to meet demand, particularly in outer London.

This year sees a General Election and another Government Spending Review in a continuing period of austerity. Unlike other cities such as Paris, we do not have long-term certainty over all our funding or the city’s ability to retain the proceeds of economic success to fund yet more growth. To maximise growth and jobs, we need steady and sustained funding.

Without investment to expand, we will start leaving people behind in peak hours when they are trying to get to work, damaging the London economy and disproportionately disadvantaging lower-paid Londoners.

Investment in bus services does not grab the headlines, but its role as a generator of economic and social value is equal to other public transport services. In fact, taking out capital investment and fare concessions for groups such as children, for which TfL is not reimbursed, bus revenue in London actually covers operational costs.

During 2014’s ‘Year of the Bus’, we celebrated the network’s key role in London’s economic and social development alongside the Capital’s bus operators. As well as looking back at our history, we talked about London’s 21st century bus service: a network for everyone, with extensive, high-frequency, reliable, convenient and accessible services.

With the Capital’s population booming, we must maintain and grow this vital public service to the benefit of the entire United Kingdom.

Mike Weston is Transport for London’s Director of Buses. After graduating from Loughborough University in Transport Planning and Economics, Mike joined London Transport in 1985, initially in bus network planning and then moving on to other areas such as management of bus contracts and bus infrastructure. Mike became Head of Bus Operations in 2003 and in August 2004 was promoted to Operations Director for London which widened his responsibility. In October 2013 he was appointed Director of Buses which includes further responsibility for procurement, performance and development of the London bus network. Mike is also responsible for the environmental management of London’s bus fleet and has been responsible for delivering a number of projects including the New Routemaster and the retro-fit of 1,000 Euro III buses with Selective Catalytic Reduction systems. Mike is also Chair of the UK Low Carbon Vehicle Partnership, Bus & Coach Working Group and Vice-Chair of the UITP Bus Committee.

By Mike Weston, Transport for London’s Director of Buses