LOST – which has nothing to do with missing people or the famed TV series – stands for the new law on transportation company security bodies which came into force throughout Switzerland on 1 October 2011, and the country’s public transport companies had nearly a year to apply it to daily operations. Implementing this new law on the TPG network (Geneva’s public transport company) required a new collaboration with the CFF (Chemins de Fer Fédéraux) Railway Police, known as Polfer. Pierre-Yves Gruaz – Chief Operating Officer of TPG – provides further information about LOST and explains that Polfer have been accompanying TPG’s own security agents on the ground and lending a hand since autumn 2011… 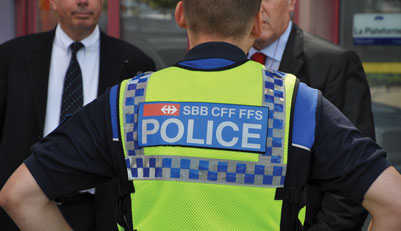 Under the terms of LOST, ‘transport police’ refers to sworn uniformed public servants in possession of a Federal Police certificate, as the carrying of arms is necessary. The TPG’s own security service encompasses ticket inspectors and employees who assist drivers on the network on a daily basis, particularly during disruptions. Both bodies have equal authority to:

The Transport Police, now contracted by CFF to TPG, have further jurisdiction to remand those arrested in custody and to confiscate any illegal items in their possession.

Does TPG need its own police force?

As LOST comes into force, the TPG has not only defined the powers of its own security personnel – particularly ticket inspectors who, in their line of duty are often challenged by fraudsters – but has also strengthened its network security policy to provide employees, Geneva’s citizens and passengers ever-safer public transport. Incivility has been on the rise since the 1990s and the sole presence and authority of inspectors and professional security guards was deemed to no longer be enough. With the new opportunities provided for by the new law, TPG decided to enlist reinforcements in the form of a police force.

According to LOST, there were three solutions:

Some companies, including Transports Lausannois (in the canton of Vaud), opted for formal cooperation with their cantonal police; this was not an option for TPG due to the many priorities of the Geneva Cantonal Police.

The second solution, to establish an internal Transport Police Unit, had been on the agenda for some time. However, venturing into an entirely new field, far removed from ours, proved not to be the most advantageous, both logistically and financially: the investment in terms of training and equipment, not to mention the measures necessary in securing an area within the company suitable for a police force (duty shifts, weapons storage, uniforms, etc.), deterred us. The idea of setting-up our own police force was thus abandoned.

In the end, using an existing police force with a proven track record and specialising in public transport was the natural choice. We thus contracted the services of CFF’s Railway Police, who had already been keeping the Swiss Federal Railway safe for nearly five years by the time LOST came into force.

The great advantage of acquiring the services of a dedicated transport police force obviously lies in its exclusive availability to the company. When a simple ticket inspection goes wrong, or when there’s an accident on the network, i.e. a derailment or any other incident with consequences that cannot legitimately be managed by TPG’s own security agency alone, police intervention is required. However, the presence and availability of the cantonal police cannot be guaranteed at all times. By working with the Transport Police, whose patrols are at TPG’s service, help is always on hand, when needed.

For LOST, the mission of public transport company security bodies is to protect employees, passengers and to secure rolling stock and other infrastructure. However, for TPG, the primary mission of a security force, especially this special police force, is prevention. TPG’s entire security policy is based on preventive measures; in the early-2000s, we increased the presence of on-the-ground personnel, provided private security guards for ticket inspectors in the evening, widely installed video surveillance in vehicles (100% of the fleet will be equipped with cameras by the end of 2014) and, finally, implemented our collaboration with the Transport Police in autumn 2011.

While the speed and effectiveness of police interventions are met with relief by our staff and passengers in the event of an incident, this is not their only task on the TPG network. They also provide back-up during ticket inspection and assist our staff by carrying out ticket inspections themselves. But it’s the uniform and the legitimacy it represents, which have the desired deterrent effect.

Decrease in incivility and attacks through effective prevention policy

Currently, the Transport Police, in the service of TPG, comprises 25 men and women (divided into teams and shifts) who patrol the network until 2:00am on a random basis to retain the ‘surprise’ aspect of the stop and checks. On Fridays and Saturdays, the police patrol mainly in the evening and at night until 9:00am so that they can deal with anti-social behaviour prevalent on lively weekend nights. In 2014, these services were allocated a budget of 2,000,000 Swiss Francs, expected to remain constant in the coming years.

Three years after LOST came into force, the collaboration with the Transport Police is paying dividends: attacks and incidents of anti-social behaviour are down by 20-25%. This very positive result is encouraging and we will continue our policy of prevention.

In autumn 2011, at the time LOST came into force, TPG was carrying out regular comprehensive ticket inspections. This type of inspection is part of the overall anti-fraud strategy. The aim of the operation is to determine the actual rate of non-compliance with the transportation law. It’s the only way to inspect all passenger tickets and ensure absolute fairness to all TPG customers, in respect for those who buy their tickets. It also has a deterrent purpose. The way these inspections are carried out is that shortly before the stop, passengers are informed that there will be an inspection. Those who are alighting at the stop are requested to prepare their tickets, or, if they don’t have one, proof of identity. Upon arrival of the tram, the ticket inspectors split up to wait at each door. Transport Police Officers are in a back-up position, at the ready to stop anyone slipping through. Inspectors check passengers’ tickets as they alight. Passengers with a valid ticket may continue, whilst others are directed to an interview area further away, under police watch. The inspection continues inside the vehicle before the tram leaves the stop. The entire operation is carried out in less than two minutes, sometimes with the support of the cantonal police and border guards. Some of these inspections have led to the capture of fugitives wanted by the police and, in happier circumstances, to finding missing people.

Pierre-Yves Gruaz was appointed to the position of Chief Operating Officer at TPG in 2009, a job that entails overseeing drivers, all staff dedicated to the daily implementation and optimisation of the network and TPG security bodies – approximately 1,300 people in total. As Head of this area of expertise, he and his team developed TPG’s security policy, in-line with the new law on transportation company security bodies – LOST. He previously managed some 500 employees in the Vaud roads department and will return to this canton in early-2015 in the capacity of General Manager of Mobility and Roads.