Sporveien: the pulse of Oslo with a clear mission

Sporveien Oslo AS is Norway’s largest public transport provider, transporting approximately 200 million passengers by tram, bus and metro. Sporveien also undertakes extensive activities relating to the operation and maintenance of trams and metro carriages, as well as the development and management of infrastructure and real estate relating to public transport in Oslo. For Intelligent Transport, Cato Hellesjø – CEO of Sporveien Oslo AS – provides a few more details…

The group holds approximately 3,300 employees and achieved significant revenues of NOK 3,480 million in 2013.

Sporveien is solely responsible for the operation of the metro and tram systems in Oslo through operating companies Sporveien T-banen AS and Sporveien Trikken AS. It was recorded that approximately 135 million passengers used the tram and metro in Oslo throughout 2013.

Unibuss is the organisation’s bus company which operates a scheduled service in competitive markets in Oslo, Akershus, Oppland and Vestfold, in addition to operating airport buses to and from Værnes, Rygge and Torp airports. It was recorded that around 80 million individual journeys were undertaken by bus in 2013.

Sporveien has an important history dating all the way back to 1875. The company has proud and motivated employees who work 24 hours a day, 365 days a year, to provide the best possible service for the city of Oslo.

While Oslo sleeps, the company’s employees are hard at work in the city’s streets and tunnels, ensuring that the necessary preparations are made for the first departures of the next morning.

Sporveien is the pulse of Oslo, and the company’s social mission is clear: Sporveien shall enable the city and its people to function together effectively.

Sporveien Oslo AS is wholly-owned by the Oslo municipality and the municipality’s ownership is managed by the City Council’s Department for Transport and the Environment. The group consists of six limited companies, and the subsidiary Unibuss AS has a further three limited companies within its organisation. The majority of scheduled services are operated through an agreement with management company Ruter AS, but Unibuss also undertakes in addition assignments for Opplandstrafikk and Vestviken Kollektivtrafikk.

‘Best 2015’ is Sporveien’s strategic plan towards 2015. The main objective for the plan is:

‘Sporveien shall be the best provider of public transport in Norway in 2015.’

To be the ‘best’ means that no other market participant shall provide more qualitative, safe and efficient public transport services than Sporveien in the Norwegian market in 2015. In order to be ‘Best 2015’, Sporveien shall follow a three-step process in order to ensure professionalism, efficiency and industrialisation.

An important part of the strategic work is an improvement programme that will ensure that Sporveien provides better and more cost-effective public transport. A total improvement potential of between NOK 270-400 million in annual effects has been identified, and the realised effects totalled NOK 172 million as at 31 December 2013.

Sporveien is also responsible for some of the most important public transport development projects in Oslo and Akershus. These include the expansion and renewal of the Kolsås metro line in Bærum and the development of the Løren metro line in Oslo. Both will increase the capacity of public rail services and help to ensure that public transport is able to handle the expected growth in traffic in the Oslo region.

In addition, a significant upgrading of the existing tram and metro infrastructures is being carried out through a number of larger and smaller projects. The modernisation of the Lambertseter metro line, renovation of stations on the Grorud line and renovation of Ensjø station are some examples of projects that were completed in 2013.

Cato Hellesjø is CEO of Sporveien Oslo AS. He is also Chairman of the Board at Sporveien T-banen AS, Sporveien Trikken AS and Unibuss AS, plus Deputy Member of the Board at Norwegian Broadcasting (NRK). Cato is the former CEO at the newspaper Dagbladet AS. 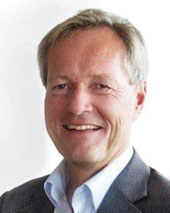 By Cato Hellesjø, CEO of Sporveien Oslo AS