SL – Stockholm Public Transportation – is presently renewing its Metro services on the Red line with the introduction of new C30 vehicles from Bombardier Transportation, together with a new signalling system from Ansaldo STS and the construction of a new underground depot in the southern suburb of Norsborg. SL’s Red Line Upgrade Programme Manager, Sonja Martin-Löf, provides further information and why it is important to transform this line…

Stockholm is the centre of Sweden’s business world. A majority of national and international corporations have their local head offices there, and its visitors consume an amazing 8.5 million guest nights. On top of that, research shows that Stockholm is about to grow from today’s 2.1 million to an estimated 2.6 million inhabitants by 2030.

But Stockholm hasn’t always been a ‘million people’ city. Before the Second World War, it was a relatively small town with less than 600,000 inhabitants. On the streets, public transportation was carried out by electrified trams and buses that struggled side by side with hand carts, horses and a handful of automobiles.

An embryo to a Metro was opened in 1933 when a tunnel was built under the south side of Stockholm for an underground tram line. Three underground stations were built – Ringvägen, Södra Station and Slussen.

Since the tram was built in a tunnel, the new transport service was named ‘Tunnelbana’ – Swedish for rail in a tunnel. Still today the Stockholm Metro is called ‘Tunnelbanan’, and is marked by a white sign with a blue ‘T’.

The original tunnel was modified to Metro standards in 1950 when it was integrated in Stockholm’s first Metro line, the Green line. The stations are still in use, but two of them have been renamed.

The Green line was inaugurated in 1950, and opened up for a very fast growth of Stockholm’s suburban areas. Hökarängen, southeast of central Stockholm, had only 45 inhabitants in 1946. In 1952, two years after the introduction of the Metro, this number had grown to 16,000. And Hökarängen wasn’t the only place where a similar explosion in population occurred. In the 1950s and 1960s, when Stockholm grew very fast, a number of new residential areas popped up along the new Metro stations.

In the coming 10-15 years from today, the Metro system is about to be expanded with over 19km of new rail, enabling efficient commuting to a number of new living areas, both close to the city, and more distant. A total of nine new stations are presently being prospected. Around the new Metro, several thousand new apartments and detached houses are being planned which is absolutely necessary. Presently, around 35-40,000 swedes move to Stockholm every year, both for studies and a new career. This is equivalent to two fully-seated buses with new Stockholmers, every day, all year round.

More and efficient transportation is important, especially when considering the Swedish climate. Public transport in Stockholm has to be dimensioned for the climate peaks. In the summertime, the streets of Stockholm are filled with bicyclists and pedestrians, but in the winter, they all crowd in buses, trams and in the Metro underground. Very few use the slippery pavements for a walk to the office, especially as the winter temperature easily drops well below -15oC and 25cm of snow can fall in just one night.

With a daily traffic volume that regularly exceeds 500,000 passengers in the winter, the Red line is one of Stockholm’s most important routes of commuting. The Red line stretches from Mörby Centrum and Ropsten in the north, through the centre of the city and the financial areas, to the Norsborg and Fruängen suburbs in the south.

In the morning peak, many of the stations along the Red line have over 3,000 embarking passengers every hour. To the northern stations Mörby Centrum and Danderyds Sjukhus, some commuters travel up to 120km by car and bus in order to make the last part of their journey on the Metro system. At Ropsten, the majority of commuters from the island of Lidingö enter the Metro system for further transportation.

The Red line was first opened in April 1964 and neither the signalling system nor the traffic control centre has been updated.

In 2008, the decision was made to upgrade the signalling system. After an extensive procurement process, Ansaldo STS was chosen as the supplier.

Since the installation in 1950, the present signalling system has been modified several times as the Red line has been extended. This was all done in a time when technical documentation didn’t really have the same status as it has today. This means that not all circuit diagrams are correct. It also means that some cables are more than 50 years old, with its insulation at the edge of its technical life expectancy. Updating the signalling system will be an extensive task.

Turning our attention to the vehicles, the previous Cx and C20 trains will be replaced. The older Cx-trains don’t have the technical prerequisites to operate in the new digital signalling system. A limited number of C20s will be modified for operation on the new signalling system, in order to complement the first C30 vehicles before the new fleet is big enough to handle the traffic.

The modified C20s will have the ability to operate both in the new digital environment, and on the old analogue signalling system, making it ideal for the first tests of the new signalling system in commercial operation. If any problem is discovered, the system can easily be switched back to analogue mode in less than 10 minutes – perfect when test traffic begins on the southern part of the line between Norsborg and Sätra in 2016.

The new C30 vehicles will be delivered to SL in 2017. They will have continental furnishing with both side and lengthwise mounted seats creating more space in the car. Also, 24 instead of 21 doors on each side of each train will help quick embarking and disembarking.

The new C30 trains has a built in climate control system and functions such as a passenger information system with a flat screen over each door that provides information on traffic disruptions, an active map showing present position along the line, as well as any additional information directed to passengers.

In Norsborg, on the far south end of the Red line, an underground depot is presently being built. Three tunnels, all over 300m-long, are being built to accommodate up to 17 full-length metro trains at night, and it includes a new modern cleaning process where all trains will be cleaned at night. A service workshop is also being built above ground.

The Red line upgrade programme consists of six separate projects. The major projects are MER TTSS responsible for the signalling system, the C30 project handling the vehicles and the Norsborg underground depot project.

The UTO project performs a UTO pre-study, in preparation for a decision whether to introduce UTO or not, that is due in 2015. The scope includes operations, OCC, safety along the track as well as on platforms (fencing, surveillance, various sensor technologies and CCTV).

The fluctuating Stockholm climate complicates the installation of both various sensors along the track and on platforms, as well as the installation and operation of platform screen doors. Previous tests have been conducted using a snow machine to create a controlled, artificial snow storm. Tests have also been made using live parrots to simulate pigeons on the rail. In the coming winter, new tests will be performed but this time in a live traffic environment.

The Nyboda/Hammarby project has the scope to adapt workshops for the new trains. The new C30 trains consist of two vehicles instead of three, making each vehicle 50% longer than a C20, and giving them a different wheel structure than the present fleet.

In Nyboda the wheel lathe is rebuilt with a severe extension of the indoor service rail. In Hammarby, the existing depot is being modified for carrying out complicated repairs on the new fleet.

Finally is the RLU-IT-project – the Red line upgrade programme’s smallest project group. The basic challenge is to coordinate all included IT-systems serving the updated Red line. A possible storm cloud could be that that the signalling system and the C30-train are delivered at different moments, making last minute adjustments a bit trickier. Another worrying factor is that they both come with a considerable number of sub-systems, which need to be able to talk to each other. Sub-systems that, at this stage, don’t have a systems owner.

In spring 2017 the first C30 will be put into operation on the southern part of the Red line. The inauguration is already being planned. By the end of 2021, the Red line will be operated solely by C30 trains.

The programme will be closed in 2023.

Sonja Martin-Löf has spent her entire professional life working with railways and Metros. She has worked in a number of major Swedish railway and metro projects, and a range of activities covering construction, tracks, depots, vehicles and power supplies as well as signalling systems. As a consultant Sonja has also been involved in international projects, working with the signalling systems of the Teheran and Bucharest Metros. Since 2010, Sonja has headed the upgrade programme of the Red line in the Stockholm Metro. Sonja has a bachelor degree in engineering. 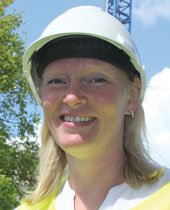