Improving the Tube for London

Life’s never dull on London Underground, but the last couple of years have been truly memorable. The 2012 Olympic and Paralympic Games gave us the chance to showcase London and its transport network, and 2013 saw a year-long celebration of the Underground’s 150th anniversary and the railway’s role in the capital’s growth and development in the last century and a half. We’re now also starting to really see the benefits of all the modernisation work we’ve put into the network, with a programme that’s more far-reaching and intensive than anything attempted before. Rebuilt stations, brand new trains and upgraded signalling are helping us to unlock 30% more capacity, while a steely focus on reliability has seen delays reduced by 37% in the last five years. The Victoria and Jubilee lines now run with record reliability and at some of our highest ever frequencies, rivalling the most frequent services in the world…

But we can never stand still. London’s population is forecast to grow by more than 20% to 10 million by 2030. The investment we’re putting in now means the Tube will be carrying more than 20% more customers than the current four million per day, even without the additional 10% capacity uplift that will come with Crossrail when it opens. Our challenge is to keep-up with the demand that comes with London’s growth over the next decade, and in ways that are at once innovative, safe, good value for the fare payer and with minimum disruption to customers. Well, it’s no fun if it’s too easy.

We’re becoming first-class at that last one, by reducing the impact that our modernisation works have on our customers. It was clear to me that we couldn’t allow the level of disruption that customers experienced during the Jubilee line upgrade to be repeated across the network. All of us working to deliver the Tube’s modernisation are customers of the network too, so we know the frustration that the old ways of doing things created. We set tough targets on the Northern line upgrade, which is having the same signalling system installed as the Jubilee line. Once the upgrade’s complete we’ll be able to carry an extra 11,000 people in the peak and journeys will be 18% faster. Our intention is that customers shouldn’t notice any impact while the work is undertaken, despite the work on signalling, trains and control being deeply intrusive on our own systems. In January 2014 we switched on the whole central section of the new signalling system between Euston and Oval and no one noticed; all that our customers should notice is the boost in train frequency later in 2014 when we’ve finished the job.

We’re also making innovation our business. It’s an incredibly exciting time for me as an engineer to see the passion and creativity we have at London Underground, exemplified by our New Tube for London (NTfL) programme – the development of the new trains for the deep Tube lines (Piccadilly, Bakerloo, Central and Waterloo & City lines). At the end of February 2014 we started the search for a supplier to build the NTfL, and we intend to issue a formal Invitation to Tender in early-2015. This programme is shaping the next generation of trains and is pivotal to how the experience of travelling on the Tube will change during the next 50 years.

We’ve just finished feasibility, to find out what is possible to deliver in the deep tunnel environment. This, along with on-going dialogue with staff, customers, stakeholders and the train manufacturing industry, will inform how the new train will look and operate once it’s introduced. The new trains, capable of full automation, will enable more frequent and reliable services, boosting capacity and making journeys better and more comfortable for customers.

We know it will be air-cooled – a first for those deep level lines – and much more energy-efficient thanks to the use of inter-car bogies. These offer a range of benefits, including a 10% capacity increase over the conventional train design of the equivalent length, less weight to carry and underframe space available for air-cooling systems. The trains will all have double-doorways, evenly spaced to improve boarding and alighting times, and we’re looking closely at the level of automation that we can achieve on our infrastructure. Throughout the feasibility stage, we’ve engaged extensively with the train manufacturing industry, and we’re confident that these features are all possible for NTfL trains, even given the restrictive nature of the deep Tube tunnels.

Like the Sub-Surface upgrade (the District, Metropolitan, Circle and Hammersmith & City lines), our approach to the New Tube will create greater efficiency, because we’ll not only be able to place a larger order of trains over a longer period of time, but it will standardise the way we maintain those lines. Initially, the NTfL will focus on lines which haven’t been modernised under our current programme but, in the longer-term, can be used to help shape all of our deep Tube lines, including the Jubilee and Victoria lines.

We’ve also changed the way we deal with our supply chain with the introduction of our Innovative Contractor Engagement (ICE) contract, which we used for the first time in awarding the contract for the rebuild of Bank due in 2021. This is one of the key ways in which we’re delivering a step-change in our relationships with contractors, and the Bank process was a great test bed because it called for potential partners to come up with some creative ideas on delivering the scheme. ICE means we set out to contractors the things that are most important to us, like capacity, reliability, accessibility, the hours of service and minimising disruption to our customers. We know that if we can move more customers we’ll make more revenue and we’re prepared to share that extra income with contractors who are ready to give us their best hand – the tricks of the trade that they might have traditionally used to get a better deal for themselves at the expense of the client. It’s an approach that worked well on the Bank contract, delivering 45% additional value through cost savings and improved benefits. This has reduced the estimated final cost of the project by £61 million and cut planned engineering closures by more than 22%.

We’ve brought the same wide perspective to placing orders: 50 escalators on the Tube network are due to be replaced over the next 10 years, and our engagement with suppliers has allowed us to secure economies of scale which mean each escalator is now 57% cheaper.

2014 is set to be another challenging year, with several big ticket items in the offing. We’ll be re-letting the signalling contract for the Sub-Surface lines, after we agreed with Bombardier at the end of 2013 to put the contract back out and start a new tender process. A great deal has already been achieved on the upgrade, where we and Bombardier have undertaken preparatory work including the construction of a new control centre, which means the project is ready to be advanced further. We and Bombardier have taken the decision to re-let the contract, and that is the right decision for Londoners. The new signalling will mean a third more capacity overall on the District, Metropolitan, Circle and Hammersmith & City lines. We’re continuing to roll-out the new air-conditioned walk-through S-Stock trains across those lines, which Bombardier continues to supply to LU.

We’re also pressing on with key phases of the expansion of stations at Paddington, Bond Street, Vauxhall, Victoria and Tottenham Court Road, and just getting started on the Northern line extension to Battersea in south London and the Metropolitan line to Croxley in the north-west of the capital.

At the heart of getting this immense job delivered is our fixation with safety – it’s vital that we build on our impressive safety record because, with so much construction and system work, much of it involving teams of hundreds of staff around the network at weekend, and at nights, I’m determined that we remain vigilant. My team and I monitor safety trends and carry out reviews into every incident. Although our overall trend is better than the industry average there’s always room to improve, and I want it to be as close to zero-harm as possible.

Our recent improvements to the Tube network have delivered massive benefits, leading to superb levels of reliability, greater capacity on modernised lines and quicker journeys for our customers. In the next few years we aim to push those newly-upgraded lines even further and operate a trains-per-hour service to rival some of the best in the world.

But only sustained, long-term funding will enable us to keep getting maximum, value for money. With a supply chain of 25,000 it’s vital that we can provide certainty for our contractors, as well as place orders to a scale that gives us – and tax payers – a better deal and more reliable service. We’re rightly proud at the levels of service and reliability we’re now turning out on the Jubilee and Victoria line, but we need to bring that quality to the rest of the network if we are to continue to operate as the ‘engine room’ of this great city.

David Waboso CBE is Director of Capital Programmes at London Underground, where he oversees a £1.3 billion annual upgrade programme – the biggest in the company’s history. The investment programme includes trains, track, signals, stations, power supplies, control systems and all related works. David is an internationally renowned engineer and project manager and has worked for some of the world’s most prestigious engineering and consulting firms on infrastructure programmes in the UK and internationally. His first experience in railways was with the Docklands Light Railway, where in 1996 he was awarded UK Project Manager of the Year. 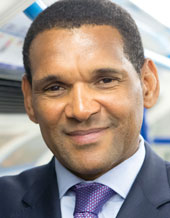