Verkehrsgesellschaft Frankfurt am Main (VGF) operates underground and tram lines in the city of Frankfurt – a city with more than 700,000 inhabitants and the fifth largest community of Germany. In 2003, the City of Frankfurt decided to put the whole of Frankfurt’s bus transport system out to European-wide tender. VGF’s own subsidiary – In-der-City-Bus (ICB) – has to date won 50% of the city’s bus lines. Today, VGF operates nine underground lines with a total length of 65km and nine tram lines with a length of around 67km. In 2013 these 18 lines transported more than 167 million passengers, and taking the buses into consideration too, Frankfurt’s public transport network carried more than 220 million passengers… 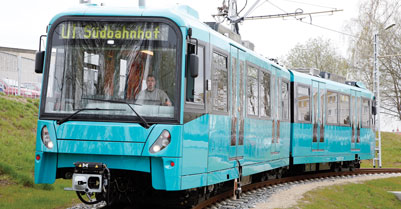 In Germany people say ‘standing still means stepping back’ and this is especially true where public transport for a modern city is concerned. Over time, tracks, stations and vehicles get older and are heavily used by millions of passengers every year. What was once new and ‘state-ofthe- art’ will need refreshing and, in some cases, need complete reconstruction due to the rapidly changing demands of passengers – i.e. the need for more or longer trains, to travel in air-conditioned vehicles, for surveillance cameras to be installed or to adhere to new environmental standards.

In order to move forward, VGF is committed to continue its programme of extending underground and tram lines, of reconstructing older stations and also replacing older rolling stock with new vehicles.

Since the beginning of 2014, construction of new tracks to extend tram line 17 south of the river Main have been underway. This project will cost €20 million and is expected to be in operation by December 2014. The new route will be approximately 1km-long with one new stop called S-Bahn Stresemannallee, where it will be possible to change from VGF tram lines to Deutsche Bahn’s S-Bahn services.

Extension of underground line U5

Also in 2014, VGF will start its biggest and most important project for years: the extension of underground line U5. Currently, the line – running from Preungesheim in the north of the city via Konstablerwache and Dom/Römer – ends at Central Station. The track extension will leave the U4 tunnel under Platz der Republik turning to the west towards Europaviertel – a new developing district in Frankfurt north of the Central Station. This area was once the central freight train station, but when complete will be transformed into a new district with apartments, shopping centres, offices, restaurants and hotels. The whole area is close to Frankfurt’s well-known fair and exhibition centre and will, one day, house more than 3,000 apartments and create 30,000 jobs.

After turning to the west under Platz der Republik, the tracks will remain underground for 1.4km and will include one new underground station called Güterplatz. The remaining 1.3km will operate overground with three new stations: Emserbrücke, Europagarten and Wohnpark. Between Europagarten and Wohnpark terminal station, another tunnel for both trains and automobiles will be constructed in order to keep the park area of the new Europagarden untouched.

The costs for this project were estimated in December 2013 at €217 million and operation of U5 was projected to start in 2019. However, following further examinations of the ‘flowing-off’ of underground water, a revision of the construction of the tunnel section and Güterplatz station was made. Construction of the tubes was originally planned by injecting concrete – a method considered necessary due of the depth of the building site, as the connection to the U4 tunnel lies 27m underground, and Güterplatz station will be 20m-deep. Now a gigantic 140m-long drilling unit and a special hydro-shield will be used. The complete digging process will be performed without changing pressure or affecting underground water. According to the Frankfurt Town Council, the project will not be stopped but it is now under review because an additional €50 million of funding is needed. This of course impacts line U5’s operation start-date which is now not expected until 2021 or 2022.

VGF opened new underground lines U8 and U9 in 2010 and the new tram line 18 (connecting the district of Sachsenhausen, south of the river Main, with the new municipal district Frankfurter Bogen) in 2011. New or extended routes and lines usually require new (or more) vehicles for operation. In December 2011, VGF ordered another 78 light-rail trains – of type U5 by Bombardier Transportation (BT) from Canada – and nine new S-type trams, also manufactured by BT. Altogether this order was worth more than €200 million. The delivery of the trams has been underway since summer 2013; after which BT will start to bring the new U5 vehicles to Frankfurt.

In 2003, VGF began to renew its rolling stock by ordering 65 S-type trams from BT. And in 2008, 146 new U5-type light-rail trains were ordered, again from BT. VGF is to replace PtB, U2 and U3 light-rail vehicles, some of which are more than 45 years old. While the replacement of older Pt-tram-cars is finished, the R-type tram-cars and type U4 light-rail trains – both in operation since 1993/1995 – will be modernised in order to stay in service for another 20 years.

Equally important to improving a public transport system by opening new lines and routes is the modernisation of older infrastructure such as tracks, tunnels and underground stations, plus tram and bus stops. In Frankfurt, the first underground section – route ‘A’ – was opened in October 1968, which means that some stations and tunnels are more than 45 years old; and that is why maintenance of infrastructure is a vital part of VGF’s daily work.

VGF also has to prepare its system for the future as more and more customers will begin to travel with higher expectations; requiring faster travelling speeds, more comfortable vehicles, efficient connections with trains and buses, and heightened levels of safety and security. That’s the reason why a lot of the older surface and underground stations in Frankfurt have been prepared for the new U5-type vehicles, which usually means heightening the platforms. In a few years Frankfurt will have a network of low-floor underground trains and trams.

These modernisation projects – with averaging costs of approximately €1 million or more per station – will refresh the network’s infrastructure. In summer 2013, five stations along line U5 north of the city’s centre underwent reconstruction: Ronneburgstraße, Theobald-Ziegler-Straße, Sigmund-Freud-Straße, Gießener Straße and Marbachweg/Sozialzentrum, and VGF spent €10 million on this project. During the time of construction buses replaced the underground trains along the northern section of line U5. Each station is now ready for the BT trains, but the old PtB-type trains will remain in operation while other stations along the line wait to be modernised. The VGF will continue this work during 2014 by reconstructing the overground stations Preungesheim, Hauptfriedhof and Deutsche Nationalbibliothek. This programme’s work will be completed by 2015 along with the modernisation of Musterschule and Glauburgstraße stations. A new station will be created at Neuer Jüdischer Friedhof, and Eckenheimer Landstraße/Marbachweg will be closed at the same time because it is too close to Marbachweg/Sozialzentrum.

Several tram stops are also under reconstruction: Dieselstraße, Daimlerstraße, Hugo-Junkers-Straße, Fechenheim Post, Ferdinand-Dirichs-Weg, Lokalbahnhof and Zoo. Ginnheim, the terminal station of underground lines U8 and U9 and tram line 16, was partially reconstructed in autumn 2013; VGF will finish this work by heightening the tram platforms in summer 2014.

In February 2014, VGF will start to rebuild the eastern entrance of Dom/Römer station because of the project to redesign the historical area between the cathedral (Dom) and the Town Hall (Römer). Part of VGF’s rebuilding work is the installation of four new escalators and one new elevator. Work will be completed in 2015.

Elevators have been installed in several older stations over recent years, including Holzhausenstraße, Grüneburgweg, Kirchplatz and Alte Oper. None of these stations had elevators before and installing them turned out to be expensive and difficult. Since autumn 2013 works have been underway to install elevators in Miquel-/Adickes-Allee station and plans for elevators for Schweizer Platz station are under further review. When these works are complete there will be only two older stations – Eschenheimer Tor and Westend – without elevators.

With its commitment to improve and modernise public transport, VGF will not face the danger of standing still.

Michael Budig holds an engineering degree and has been one of the three Managing Directors of VGF since 1999, and in 2013 he was appointed to serve for a further five years. Michael’s list of previous employers includes Üstra in Hanover, Stadwerke Offenbach and Kölner KVB in Cologne. He is also a Member of the Steering Committee of the VDV (Association of German Transport Companies), Chairman of the Works Committee of VDV as well as Chairman of the VDV group for the state of Hesse.

Bernd Conrads has been the Press Spokesman for VGF since 2002. He trained as a journalist and following his studies and a period at Axel Springer School of Journalism, he held various editorial posts including positions at Die Welt, B.Z., Sat.1 and Frankfurter Allgemeine Zeitung before joining VGF. Since 2005, Bernd has also held the position of Head of Corporate Communications at VGF.