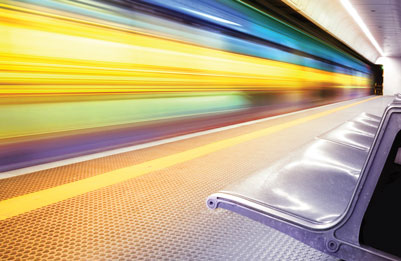 Despite the huge impact of public under – ground spaces on electrical energy consumption, research on energy use and its trends for underground spaces has not been extensive. In this perspective, the SEAM4US1 project – Sustainable Energy mAnageMent for Underground Stations – aims at reducing the energy consumption required for operating under – ground stations’ sub-systems by at least 5% in one year. This is achieved through the development and the application of a methodological and technological framework that supports optimal energetic control of metro stations and mid-term energy efficiency planning.

The SEAM4US project started on 1 October 2012, has duration of 36 months and is funded by the European Commission under the Seventh Framework Programme, 2011, ‘ICT Energy Efficient Technology’ sub-programme which aims at financing efficiency projects for public buildings.

Passeig de Gràcia – the metro station used as the real pilot for implementing, testing and validating the management systems developed by the SEAM4US project – is one of the most important and historic stations on Barcelona’s metro network. Taking into account that the annual energy consumption in all of Barcelona’s metro stations amounts to approximately 63.1 GWh, an energy saving of 5% in non-traction electricity consumption is equivalent to the electricity consumed in more than 700 households in one year.

Creating a socio-economic and technological framework for the optimal control of a metro station calls for a multidisciplinary approach that involves underground transportation, building physics, modelling and ICT competences as well as on-the-field experience pertaining to the large-scale realisation of energy efficient public spaces.

An international team was especially set-up for carrying out the project which included universities, research institutions and service companies from six European countries including Italy, Spain, Germany, Netherlands, Finland, and Sweden. More specifically, nine European companies are involved in the SEAM4US project, including:

The project’s objective – to optimise metro stations’ energy management – is achieved through the application of advanced modelling and intelligent technologies, which, through pervasive sensor networks, are capable of creating rich representations of the environment and of the usage profiles, so that optimal and adaptive policies for controlling sub-systems can be implemented.

Optimality is achieved by exploiting synergies with the external environmental climate and end-users. The SEAM4US technology is based on the ability to predict underground environments’ near-future states. This allows the implementation of proactive control policies for energy saving.

The SEAM4US technological framework enhances and integrates existing systems with energy metering and sensor-actuator networks (e.g. surveillance, passenger information, train scheduling), by means of middleware as an abstraction layer, to acquire grounded user, environmental and scheduling data. The gathered data-set is used to update a set of energy consumption and behavioural models which, in turn, support the metro station’s optimal energy control.

The project’s main outcomes are the creation of technologies for optimised and integrated energy management of metro stations, the implementation of a pilot at Passeig de Gràcia subway station, in Barcelona, and the development of a decision support system for the related mid-term investment planning.

The project is organised into five technical work packages which also represent the project stages, including:

This stage includes the station’s energy behaviour diagnosis, the identification of energy inefficiencies and the development of models aimed at determining the control policies to be integrated into the metro’s management system; that is, those which can efficiently configure the station in function of passenger flows, underground environment and external climate.

This stage consists of designing the integrated energy management system and involves the development of the middleware, the sensor-actuator network and the agent-based control system.

This stage includes the deployment of the energy and environmental monitoring networks used for the energy audit, the calibration of models and the system’s final validation. It also includes the integration of the sensor-actuator network in the management system of the Passeig de Gràcia pilot station.

This stage involves the system’s final validation meaning the final functional tests and checking the actual energy savings achievable by the system deployed. Furthermore, in this stage, the system’s influence on end-user behaviour is evaluated. A cost/benefit algorithm and a business model are designed in order to analyse the economic impact of the SEAM4US system and its worth for metro network operators such as TMB.

The project’s first stage (requirements engineering) has been successfully concluded, providing the full set of operational and system requirements that drove project design and implementation. The second and third stages (auditing and modelling and system designing and development) are almost complete at the end of the second year of research. A detailed energy audit confirmed that the annual energy consumption of the pilot station is approximately 600 MWh/year. Furthermore, the same analysis showed that approximately 60% of a station’s consumption is due to the lighting, ventilation and vertical transport sub-systems (basically, the escalators). In particular, lighting and ventilation sub-systems are the station’s first and the second largest power consumers with a consumption percentage of, respectively, about 40% and 12.5%. This circumstance, together with the diagnosis of the technical requirements and preliminary simulations, which showed considerable inefficiencies and important saving potentials for the lighting, ventilation and vertical transport sub-systems, oriented the project efforts towards the development of energy saving solutions for the three aforementioned sub-systems.

Therefore, the efficient control policies developed, analysed and deployed through the SEMA4US project concern, for instance, the automatic control of lighting on the basis of the presence or absence of people in the metro station or the management of the ventilation sub-system according to environmental conditions, crowding and train schedules. The second stage included the development of a station simulator, capable of simulating the entire station; including station sub-systems, control loop, weather and passenger models. The simulator allows scenario analysis by providing support for ‘what-if’ investigations encompassing different technology set-ups and control policies. Detailed simulation showed that the station’s energy savings vary depending on the control policy adopted but, in any case, the overall savings achievable through the SEAM4US project, related to lighting, ventilation and vertical transport sub-systems of the station, was estimated to be between 10-20%.

During the first and second year of the project the energy and the environmental monitoring were designed, developed and fully integrated. These networks monitor and record the station’s energy consumption and internal and external environmental parameters (e.g. temperature, pressure, humidity). The occupancy detection module, used for the acquisition of passenger flow data, was also developed and deployed. Finally, the fifth stage (system deployment) is in an advanced state given that the actuator network and the end-user interfaces, already developed, are about to be deployed.

Once the pilot is fully deployed, that is during the final months of the project’s third year, the SEAM4US system will be finally validated under real metro operating conditions. This will finally demonstrate the effectiveness and the worthiness of the SEAM4US project.

Giovanni Pescatori is responsible for the recently developed ‘New Business Lines’ – a department of Cofely Italia SpA since 2009. He has a degree in philosophy and a strong background in business, services, and project management. Before joining Cofely, he was Director of National Services at Ales SpA, and was responsible for the commercial area of Jacorossi SpA of the Jacorossi-Fintermica Group, involved in energy services.

Michael Pellot has been Director of Research, Development and International Affairs at Transports Metropolitans de Barcelona (TMB) since 2007. Michael started his professional career as an Engineer in Caracas, Vienna and Barcelona and has been involved in the field of public transport since 1992, when he began working for TMB. He served as Director of IT Software Developing in PC (1992-1994); Deputy of the CIO (1995-1997); Manager of the Metro Line 1 (1998-2003) and Director of New Business Development and External Consultancy (2004-2006).