MTR has a wealth of experience of successfully introducing new rolling stock around the world. In the UK, our joint venture LOROL (London Overground), oversaw the introduction of 244 new Bombardier vehicles between 2009 and 2011. We have also consulted on introducing new stock to Rio de Janeiro’s metro in Brazil, and in September 2013, the Hong Kong MTR also took delivery of a new set of 22 trains bought from China’s Changchun Railway Vehicles Co Ltd. In fact, my colleagues in Hong Kong have brought over 800 new units into service in the last 15 years. MTR has been operating, planning and maintaining the rolling stock in the Stockholm Metro since 2009 and our latest challenge is to introduce new rolling stock to Stockholm Metro’s Red Line… 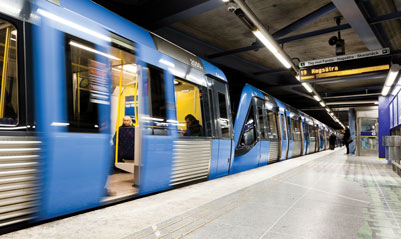 Stockholm’s population is growing rapidly and to increase passenger capacity new rolling stock is being introduced to the Metro’s second longest line. The project is being run by Storstockholms Lokaltrafik (SL) – the Stockholm transport authority – and MTR has been contributing to the project by providing advice on the introduction of the new Bombardier SL C30 trains to the network.

The project is SL’s three-stage programme to improve and increase the frequency of services on the Stockholm Metro’s Red Line. This involves introducing new rolling stock, replacing signalling and building a new depot. Stockholm’s Chamber of Commerce predicts that its city will overtake London as the fastest growing city in Western Europe by 2030. Currently, the Chamber of Commerce estimates that around 30,000 people are moving to the city each year. We therefore have a unique challenge in replacing the rolling stock in order to meet passenger demand. The aim is to start phasing in a new fleet of 96 trains into service in 2017 with the aim of finalising the introduction of the new stock in 2020. This will increase passenger capacity by approximately 30% and we are working closely with SL to introduce the new trains to the line.

Despite the inevitable challenges of introducing new stock when they go into service, we have an outstanding record of bringing new trains into service, with a commitment to maintaining and improving performance. Our service in Hong Kong runs with a punctuality level of at 99.9% and on the London Overground, our record stands at 96.6% PPM.

Any train operator will know that introducing new rolling stock to a network is not easy. MTR is well-practiced in rising to this challenge, having done so in several different countries. Over the years, we have adapted our approach to suit the specific needs of each new city, with a constant focus on minimising risk and delays.

The challenge for Stockholm

The Stockholm Metro operates in a challenging environment where the summers are hot and the winters are cold. Extreme weather can affect the reliability of rolling stock, so it needs to be able to withstand a climate that has a range of 50°C from -20°C to over 30°C. MTR and SL are working closely with the manufacturer to ensure the trains are designed to withstand extreme weather conditions.

As mentioned, part of SL’s project also involves building a new depot at Norsborg – the station at the end of the Red Line. However, Norsborg is a residential area, which meant that there was not much space to build a depot above ground. The solution was to build it underground to avoid any disruption at ground level. The depot is due to be complete in 2016 and will include a maintenance depot with maintenance space and offices at ground level, and washing facilities for the trains, tracks, electricity, signal systems and telecommunications at both ground level and underground.

MTR is very experienced in working effectively with client authorities and other partners. In London, as co-owner of LOROL, we have worked closely with Transport for London (TfL) for almost seven years. We have found that working in partnership with client authorities and having shared objectives is important. SL’s and our objectives are mutual: to introduce high quality, reliable and efficient rolling stock.

Throughout the project MTR has provided resources to SL and maintained constant dialogue to ensure that everyone is on the same page each step of the way. For example, MTR’s fleet department has provided its knowledge on operation and maintenance and how best to deal with the impact the environment has on new rolling stock. MTR has also advised on operational best practices, such as organising driver training to provide them with the skills needed to drive the new stock as well as training for staff in the Operations Control Centre.

By providing SL this level of know-how not only helps them to ensure they have the fundamentals in place, but it also means that we, as the train operator, are close to the situation which in turn better prepares us for the delivery of the trains when they arrive.

Working closely with the manufacturer

We are great believers in working collaboratively with train manufacturers. Train operators cannot just assume that new stock will run smoothly when first put into service. To prepare for any possible challenges, SL invited the supplier, Bombardier, to visit Stockholm early on in the project to get a solid understanding of how the Metro operates in the Scandinavian city. For example, it is important for Bombardier to appreciate the harsh environmental factors its trains would be exposed to all year round so that it could adapt the design accordingly.

Once the trains have been manufactured, testing will be carried out by the supplier at their premises in the first instance. In this case, Bombardier’s testing strategy is to run a 5,000km test on the new stock at its premises prior to delivery.

As with any new stock, there is always the temptation to introduce the whole fleet in one go. However, given the various risk factors involved, such as weather and new signalling systems, our experience has taught us that it is best practice to introduce new stock gradually. In 2011, new trains were introduced on the Kwun Tong line in Hong Kong one by one – initially through test runs taking place just before the service stopped for the night, then taking passengers during off-peak times. This approach ensures minimal disruption and delays should something go wrong during live service, which subsequently minimises the possibility of upsetting paying passengers.

From our experience, we would always recommend that on-the-ground experts are available especially during the early stages of the live service. When MTR supported Metrô Rio (Concessão Metroviária do Rio de Janeiro SA) with its new CRC trains from China, we flew our expert team from Hong Kong so that they were available to deal with any teething problems. With the team’s help, we successfully introduced 19 new six-car trains.

This is why we have built a team of local experts in Stockholm who have been involved from day one of the project, and who therefore truly understand the new stock and the Red Line.

There are many different factors and third parties involved in this project. But, we believe that through strong communication, shared objectives and the willingness to share each other’s experiences and knowledge, we are on track to introduce the new fleet of rolling stock to Stockholm Metro’s Red Line from 2017 onwards.

Rail ridership across the globe is increasing. Metro systems are becoming the transport of choice for urbanites. The developed world is busy increasing capacity and upgrading its rolling stock whilst emerging markets are building entirely new routes.

Rolling stock introduction is undoubtedly an essential skillset for any train operator.

MTR is a Hong-Kong headquartered international railway and property company, which is regarded as one of the foremost international railway developers and operators. In recent years, MTR has expanded internationally, with operations in Europe, mainland China, and Australia. In Europe, MTR are co-owners of the successful London Overground concession operated for TfL, . MTR is currently bidding for the Essex Thameside, Thameslink, Crossrail and ScotRail franchises in the UK.