Stepping up to the climate challenge

Anne Graham, Chief Executive Officer of the National Transport Authority (NTA) in Ireland, discusses how NTA is working with the country’s public transport operators to step up to the climate challenge. 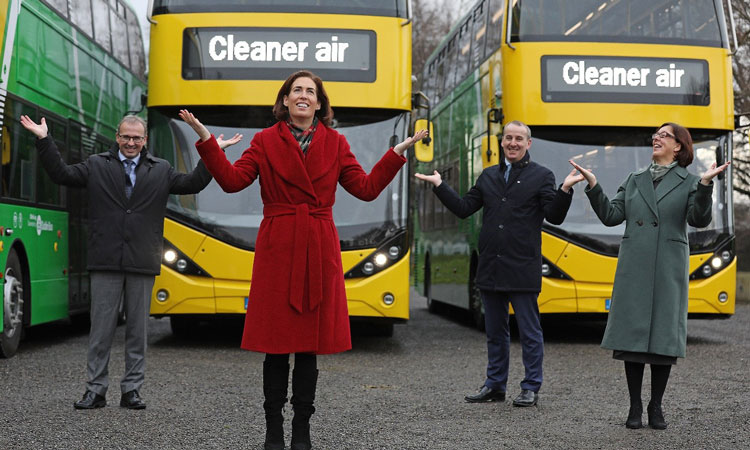 By 2040, the population of Ireland is expected to grow by over one million to 5.7 million people. This growth, along with other national growth projections on the economy and employment rates, will drive greater demand for transport across various modes, with increased movement of people and goods. While this is a sign of a vibrant economy, it intensifies Ireland’s decarbonisation challenge.

According to Ireland’s Environmental Protection Agency (EPA), in 2020, just over 18.4 per cent of Ireland’s greenhouse gas (GHG) emissions came from the transport sector, making it the second-largest contributor behind agriculture (37.4 per cent). The biggest emitter in terms of transport is the private car, with over half of all of our emissions coming from cars.

While COVID-19 disrupted many activities during 2020 and 2021, the National Transport Authority (NTA) continued to facilitate a transition to a more sustainable transport system, contributing to the overall goal of reducing transport emissions.

Low emissions on the road

The NTA is committed to a transition of the urban bus fleet to low- and zero-emission bus types. The first deliveries of plug-in hybrid double-decker buses took place in 2020, which marked the start of a process that will see carbon emissions dramatically reduced on subsidised bus services. This shift towards greater sustainability in the public transport fleet is part of a continued effort to transition to low‑ and zero-emission urban buses as provided for in Project Ireland 2040 and the Climate Action Plan.

Ireland’s National Development Plan, covering the period from 2018 to 2027, committed the NTA to curtailing the purchase of diesel-only urban buses from July 2019.

To date, a total of 280 plug-in hybrid double-deck buses have been ordered, of which 219 are destined for initial use by Dublin Bus for operation of services in the Dublin metropolitan area. The first of these buses entered service in April 2021, with all programmed to be delivered before year end. The overall order for 280 vehicles represents close to 20 per cent of the state’s overall urban bus fleet. Galway was the destination for the other buses, now in operation by Bus Éireann, and it is planned to have all of Galway’s subsidised bus services operated with this fleet by the end of 2022.

In December 2020, the NTA commenced the procurement process for up to 800 battery-electric double-deck buses, with the intention being to purchase the buses under a framework agreement over a period of five years, and the first bus is expected to arrive in the second half of 2022.

These buses will meet the relevant definition of a ‘zero-emission heavy-duty vehicle’ under the European Union’s (EU) revised Clean Vehicles Directive, which came into force on 2 August 2021. There will, therefore, be no tailpipe emissions from these buses, which will contribute to a substantial improvement in air quality in the cities and towns that they will serve.

In July 2021, a separate framework agreement was signed with Alexander Dennis Limited (ADL) for the delivery of up to 200 zero-emission battery‑electric single-deck buses. An initial order for 45 buses, commencing delivery in 2022, was also agreed, with further such buses intended to be assigned to other urban routes that are capable of being operated with single-deck buses.

More recently, the NTA, in conjunction with its operator Bus Éireann, unveiled three new hydrogen-fuel-cell-electric double-deck buses that will initially be used on commuter services in the Greater Dublin Area. The buses represent an investment by the state of approximately €2.4 million.

Hydrogen for the Wrightbus Streetdeck H2 FCEV buses will initially be supplied by BOC Gases Ireland. The buses operate in a similar way to battery-electric buses, the primary difference being the addition of on-board fuel cell and hydrogen storage tanks, which offer the potential to increase the range of the bus to upwards of 250km from a single fill of hydrogen, depending on operating conditions. A chemical reaction within the fuel cell converts hydrogen and oxygen from the air into electricity and water vapour. The electricity is then stored in on‑board batteries and utilised to propel the bus using electric traction motors, while the water vapour is expelled at the rear of the bus. During braking, energy is recovered to top-up the batteries.

In March 2021, the NTA Board endorsed a plan for the transition of the urban public bus fleet to 100 per cent zero-emission buses that is based upon the replacement of existing buses as they reach the end of their efficient operational life (nominally 12 years), but with the scope for accelerated replacement depending on the resources available. Implementation of this plan as currently envisaged will result in the transition timelines outlined in Figure 1 for the urban public bus fleets serving Ireland’s cities.

The NTA is also piloting the operation of electric public transport vehicles in rural areas under the Transport for Ireland (TFI) Local Link programme.

Low emissions on the tracks Operation of light and heavy rail services by electrically-powered rolling stock substantially reduces the use of fossil fuels in public transport. There has been significant progress on this front, with the introduction and extension of the DART (Dublin Area Rapid Transit) heavy rail and LUAS light rail systems, and the National Development Plan provides for further such public investment in the Greater Dublin Area and elsewhere in Ireland.

In addition to the extra 41 reduced emission InterCity Railcars that are currently being manufactured in Korea, it is also proposed to purchase battery electric trains as part of an initial rolling stock order that can operate without the full electrification of the lines that they serve being in place, but can then switch over to other non‑electrified lines or operate as conventional electric trains once full electrification of a line has been completed. It is planned, subject to government approval, to place this initial order later this year.

Connecting Ireland is the NTA’s programme to address the gaps in connections to local and regional centres in rural Ireland and to allow for the possibility of access to local services without the need for a car. It is proposed to finalise the network of services on a county-by-county basis in consultation with local authorities and to undertake a full public consultation on the proposals commencing this year. It is also planned to transition to a low- and zero-emission public transport fleet wherever practicable in these areas.

Transformation of the transport sector is vital to enable the transition of Ireland to a low carbon, climate-resilient and environmentally-sustainable economy. This must be achieved notwithstanding the context of a recovering economy post-pandemic, with an increasing number of transport trips being generated every year. It is also important to emphasise that a significant step-change in attitudes and behaviours must occur for Ireland to reach its targets in relation to climate action.

Policy makers and the public need to embrace the necessity to put public transport, walking and cycling at the forefront of our thinking as part of the solution to tackle our reliance on fossil fuels and to reduce our carbon emissions. The NTA will continue to work with transport operators and local authorities towards promoting a modal shift from private car use and less sustainable forms of transport to more sustainable public transport and active travel methods (including walking and cycling) and investing in the infrastructure and services necessary to achieve this.

Anne Graham is Chief Executive Officer of the National Transport Authority (NTA) in Ireland. The NTA is responsible for the provision, regulation and integration of public transport services, the provision of supporting infrastructure for sustainable transport and for driving the greater use of sustainable transport as a mode of choice. Graham previously worked with the NTA as Director of Public Transport Services on the regulation and provision of public transport services nationally. Prior to joining the NTA, she worked in the Dublin local authorities as a chartered civil engineer in the drainage, roads and traffic divisions; as a project manager on the redevelopment of Dublin’s O’Connell Street area; and as an Area Manager in the South West area of the city.