The National Transport Authority (NTA) of Ireland is a state body that was set up in 2000 and is responsible for managing public transport operators and regulating the small public service vehicle sector (i.e. taxis, hackneys and limousines). The governing body of the NTA consists of a Chairperson and 11 authority members appointed by the Minister for Transport, Tourism and Sport.

The principal functions of the NTA are split into the following two areas:
Nationally 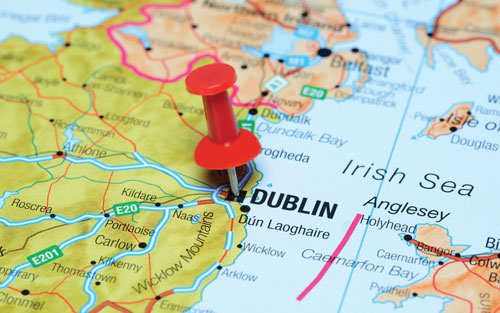 The National Transport Authority (NTA) of Ireland is a state body that was set up in 2000 and is responsible for managing public transport operators and regulating the small public service vehicle sector (i.e. taxis, hackneys and limousines). The governing body of the NTA consists of a Chairperson and 11 authority members appointed by the Minister for Transport, Tourism and Sport.

The principal functions of the NTA are split into the following two areas:

The principal functions for the Greater Dublin Area include: strategic planning of transport; development of an integrated, accessible public transport network; promoting cycling and walking; provision for financing the con – struction of public transport infrastructure generally including light-rail, metro and heavy rail; and effective management of traffic and transport demand.

The Greater Dublin Area covers the eastern region of the country – which represents 40% of the population – with the capital city Dublin at its core.

In addition to these statutory functions, the NTA develops and administers a number of grant programmes on behalf of the Department of Transport, Tourism and Sport, including: the Regional Cities Traffic Management Programme; the National Accessibility Programme; the Rural Transport Programme; Smarter Travel Workplaces and Campuses; and Smarter Travel Schools.

Intelligent Transport Systems (ITS) as a key tool

In delivering these functions, the NTA has recognised the key role that ITS can play, and has invested significantly in ITS activity as a result. The ultimate, if not sole, objective of the NTA’s ITS investment is to assist in delivering our vision, namely:

‘Greater use of sustainable modes of transport across the country’

The NTA’s recent principal areas of ITS activity include:

In addition, the Leap Card can improve the operation of public transport by reducing dwell times for buses, reducing fraud and reducing queuing for ticket machines on tram and train platforms.

Since it launched in December 2011, over 300,000 people have bought a Leap Card. This user population will continue to grow as additional features such as fare capping and period tickets are added to the card.

The intention of the national Real-Time Passenger Information (RTPI) system is to reduce the uncertainty associated with waiting for public transport arrival, and provide updates that will enable the passenger to make better ‘in-journey’ choices.

The Dublin tram system (Luas) introduced RTPI arrivals information in 2004. In more recent years, there has also been significant investment in RTPI for bus and train services.

Specifically, in terms of on-street RTPI signs, there are:

Information for Dublin Bus, Bus Éireann, and Luas is now available on a new customerfacing website1.

In addition, for smartphone users, a new national ‘Real Time Ireland’ app has been launched for Android and iPhones containing real-time information for Dublin Bus, Bus Éireann, tram and rail services. A SMS service is also available to those without internet access. The NTA intends to release the data to app developers to encourage further innovation in the way it is used and presented.

RTPI has delivered concrete tangible benefits, including:
● In Dublin Bus customer surveys, RTPI has helped improve the perceptions of service reliability from 30% in 2009 to 53% in 2012
● 77% of people leaving feedback on the customer-facing website1 say RTPI would encourage them to consider public transport more often
● The system is now dealing with 4-5million RTPI-requests a week with 80% of made via smartphone/app, and 20% on the web.

The intention of the multi-modal planner is to provide information on all the choices available when making a journey, and to update the traveller on the choice once the trip is underway – in other words, a personal guide to assist in journeys through the metropolitan networks, especially for those familiar with computers and smartphones, but unfamiliar with a locality or the particular public transport services to and from that locality.

The National Journey Planner (phase 1) has been launched both on the web1 and on a Journey Planner app. The Journey Planner processes vast amounts of data to provide trip alternatives to users based on user preferences and available trip links. The Journey planner will continue to add functionality, including developing:
● An all-island Journey Planner for Ireland
● A cycling journey planning option
● Linking the planned journey to real-time updates, so that the passenger is updated and guided through the various elements of the journey.

There is a variety of technological systems to keep surface transport moving around Dublin including traffic signal control and management systems, variable message signs, HGV manage – ment, traffic monitoring, traffic cameras, pedestrian and cycle counting systems, together with sophisticated back room analysis. The NTA has funded the development and upgrade of many of the intelligent systems in the Greater Dublin Area.

Having completed a review of the entire inventory of systems used for surface transport in 2011, the NTA will be preparing a regional Strategy Framework in 2013, to propose how the region will develop and exploit ITS into the future.

The NTA has developed an expertise in relation to trip demand analysis, forecasting, modelling and GIS centred on key data sets and large regional models.

In licencing buses and taxis, the NTA has progressed the development of key online tools, and more recently, customer-facing applications to improve the customer experience.

Much work has been done in delivering ITS by the NTA and its agents in recent years. While perhaps some of the investment is overdue, the authority has had the opportunity of studying what was developed elsewhere in Europe (and beyond), and benefitting from lessons learnt in these earlier ITS deployments. In this regard, Ireland has been in a position to deliver welldeveloped, future-enabled ITS systems in a single step.

The NTA will continue to be objective-led regarding implementing new intelligent systems. It is acutely aware of the requirement to maintain, update and protect the ITS systems it has funded or developed, and therefore only those systems necessary for the NTA to deliver its remit will be brought forward.

Key issues in the future will include: developing further multiple uses from a data source; developing and improving the various monitoring systems for network performance; integrating further the various existing disparate systems, especially for traffic management, so that the region is managed in a reasonably seamless way; and developing more tools for walking, cycling and public transport.

Tim Gaston is the NTA’s Integrated Ticketing Scheme Director – now called the Leap Card, launched in late- December 2011 and is already the most convenient method to pay for public transport. Tim has become involved in the NTA’s Real-Time Passenger Information systems and the National Inter-modal Journey Planner – both recently introduced in Ireland. Tim joined the ticketing project in 2003 from Translink, Belfast, where he was Project Manager for their smartcard project.