Within the next edition of The Sustainable Bus Update, we summarise the most recent and standout sustainable bus purchases and developments from across the globe.

Transit Systems, part of the SeaLink Travel Group, has joined with strategic partners to establish the H2OzBus Project, leveraging its global network to continue to explore delivery of innovative and sustainable transport and bus solutions.

Transit Systems has joined forces with Ballard Power Systems, BOC Limited, Palisade Investment Partners and ITM Power (‘Consortium’), by signing a memorandum of understanding as a further step in evaluating and demonstrating the concept of hydrogen fuel cell electric buses for use in public bus transport in Australia.

The Consortium will collaborate on a project to further investigate deploying an initial 100 hydrogen fuel cell electric buses in cities across Australia in Phase 1, with the intention to use this as a seed for more widespread roll-out.

The first phase of the project is a concept development phase that will focus on infrastructure requirements and detailed plans for use of hydrogen fuel cell electric buses on bus routes in up to 10 central hub locations across Australia where interest and demand for fuel cell buses has already been identified.

Clint Feuerherdt, CEO SeaLink Travel Group, said: “The establishment of the H2OzBus group demonstrates our commitment to innovation and showcases the network and capabilities of our globally recognised transport group. It seeks to provide a turn-key solution to generate a zero emission outcome in public transport. We are proud to work alongside our Government partners and agencies, as well as industry partners to ensure that our solutions continue to set the benchmark for what is possible.”

City of Craiova orders electric buses for the first time

The Romanian city of Craiova has signed a contract for the delivery of 16 Solaris Urbino 18 metre electric buses. The articulated vehicles be rolled out in Craiova in the first half of 2021. The city authorities opted for battery buses for the first time in their history, and Solaris will deliver charging devices to accompany the buses, both for overnight and fast pantograph charging.

The driveline in the articulated electric buses will consist of a 240 kW central motor. Each vehicle will be fitted with Solaris High Energy batteries and will be recharged by means of an inverted pantograph.

Air-conditioned Solaris buses will offer WiFi access and a few USB charging ports where travellers will be able to recharge their mobile phones. The vehicles will also encompass a passenger information system and a monitoring system consisting of seven cameras improving safety and travel comfort. They will also feature passenger counting gates. 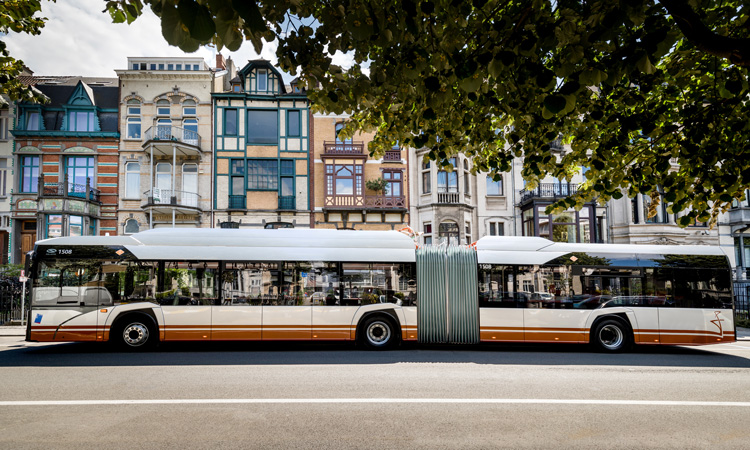 The U.S. Department of Transportation’s (USDOT) Federal Transit Administration (FTA) has announced approximately $130 million in grant selections through the Low- or No-Emission (Low-No) Grant program, which funds the deployment of transit buses and infrastructure for the purchase or lease of zero-emission and low-emission transit buses and supporting facilities. In this competition, FTA focused on the introduction of new technology not commonly found within U.S. transit systems such as advancements to propulsion systems. 41 projects in 40 states and the District of Columbia will each receive funding through the programme.

“These grants will help communities nationwide deploy the next generation of bus technology to enhance their transportation system,” said Secretary Elaine L. Chao.

Eligible projects include the purchase or lease of buses powered by modern, efficient technologies. These include hydrogen fuel cells, battery electric engines, and related infrastructure investments such as charging stations.

Some examples of selected 2020 Low-No grant projects include:

“We perceive the decision to buy 50 more electric buses of Solaris as confirmation of the positive experience the operator has had using Solaris electric vehicles; experience resulting not only from the high quality of the vehicles as such but also from the professionally designed maintenance service. We are proud that we have a real impact on the improvement of air quality in Cracow,” said Petros Spinaris, Deputy CEO of Solaris Bus & Coach.

The electric buses supplied to Cracow by Solaris will be propelled by electric axis with integrated electric motors. The design of the articulated buses will be adapted to two recharging modes: by means of a four-pole roof-mounted pantograph placed above the first vehicle axis; or using a plug-in charger.

“Cracow has taken the fifth place in the contest ‘Green capital of Europe 2022’. One of the factors taken into consideration in that competition was ecological transport and its meaning for the environment. The new buses will service four bus lines running through the Three Bards’ Avenues (Juliusz Słowacki Avenue, Adam Mickiewicz Avenue, Zygmunt Krasiński Avenue), that is in a region of the city where the air pollution limits are exceeded the most,” said Cracow Mayor, Jacek Majchrowski.

The purchase of 50 articulated electric buses for Cracow has made it onto the list of projects selected for European Union subsidising.  “We have been awarded ca. 110 million PLN in subsidies for the purchase of those vehicles. So this is an opportunity for us, by involving relatively small own funds, to obtain zero-emission buses for the residents of Cracow,” commented Rafał Świerczyński, CEO of MPK S.A. in Cracow. 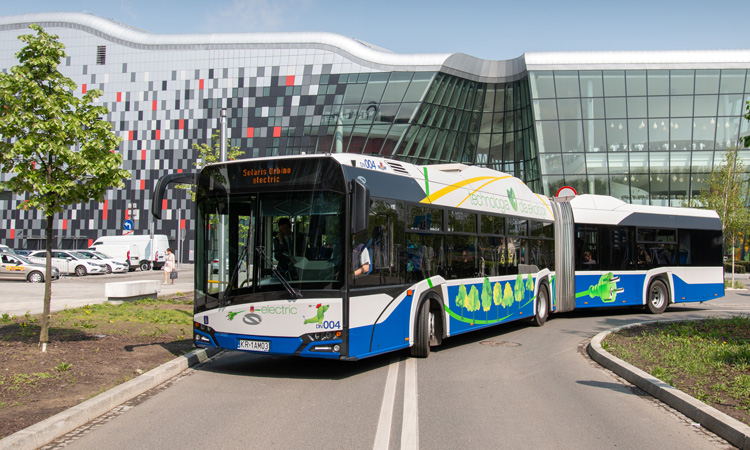 A proposed £10 million scheme could see 25 new ultra-low emission buses coming to the streets of Farnham. Surrey County Council is working with local operator Stagecoach on the plans to bid for funding from the government’s all-electric bus town scheme.

The buses being considered have a small diesel generator as fully electric buses would not be able to serve the long routes in the area. However, the generator would be automatically turned off in Farnham town centre, putting the buses into a zero-emissions mode.

Matt Furniss, Cabinet Member for Highways, said: “Transport is responsible for 46 per cent of emissions in Surrey, so improving public transport and reducing air pollution are both vital to help us tackle climate change and become a net zero carbon county by 2050.

Surrey County Council previously worked with Stagecoach to win government funding to convert all Guildford Park and Ride services to a fully electric fleet of buses. Edward Hodgson, Managing Director of Stagecoach in Surrey, said: “Stagecoach introduced Surrey’s first electric buses in 2019 and we’re delighted to again be working with the County Council to try and bring more ultra-low emission buses onto the Surrey network.

“Increased bus use is very much part of the solution to the climate emergency we all face and this exciting proposal would not only give zero emission buses in Farnham, but also deliver a significant improvement in overall customer experience encouraging even more people to ditch the car and switch to sustainable public transport.” 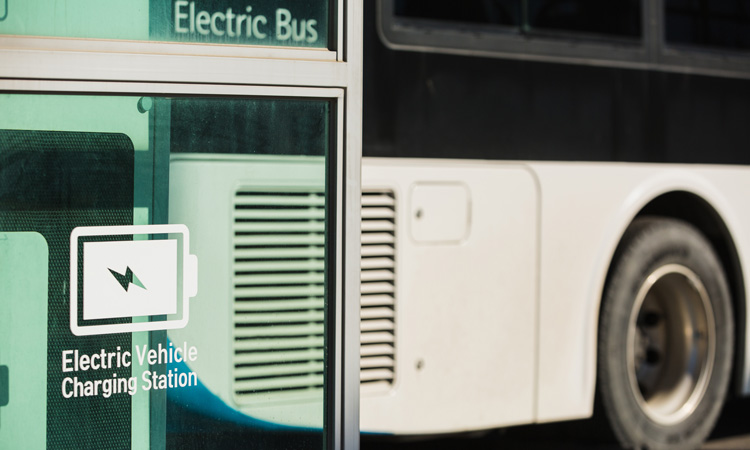 Poznań to introduce 37 electric buses in 2021

Polish MPK Poznań has ordered 37 electric buses made by Solaris. The zero-emission vehicles will be delivered by the producer in the second half of 2021.

“This is very good news for the city and its inhabitants. Further electric buses mean even more ecological public transport, cleaner air, and therefore better quality of life, and this is what we care about most”, said Jacek Jaśkowiak, Mayor of the City of Poznań. “It is not yet a year since the first e-buses came to Poznań, and more are being bought. This shows the consistency of the City and MPK Poznań in efforts to improve living conditions in the city. It is worth emphasising that these activities are part of a wider programme. We are currently preparing the Strategy for the Development of Electromobility for the City of Poznań by 2035. The main goal of the programme is to support the development of the broadly defined electromobility policy and sustainable development of transport and mobility in Poznan.” he added.

“We strive to make public transport, both by bus and tram, increasingly accessible, attractive and ecological. With the purchase of emission-free buses we are trying to meet requirements set by the Act on e-mobility. In this day and age of environmental degradation, of cumbersome exhaust emissions and noise pollution in cities, e-mobility is a necessity,” commented Wojciech Tulibacki, CEO of MPK Poznań. 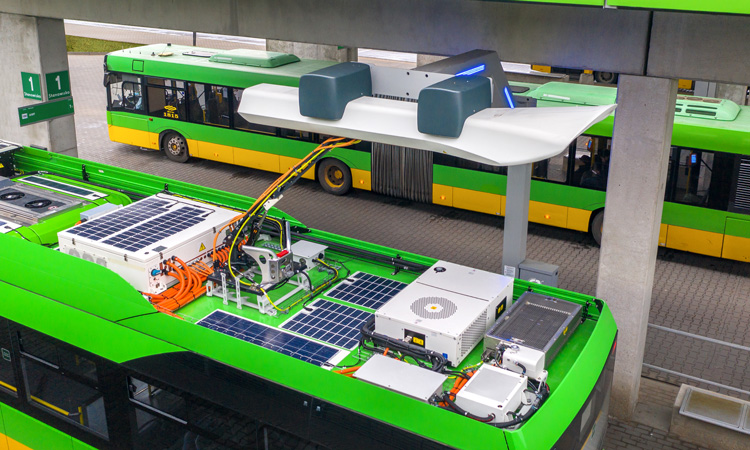