New walking and riding connections will be fast-tracked to ensure that people can travel around the city while maintaining physical distancing. 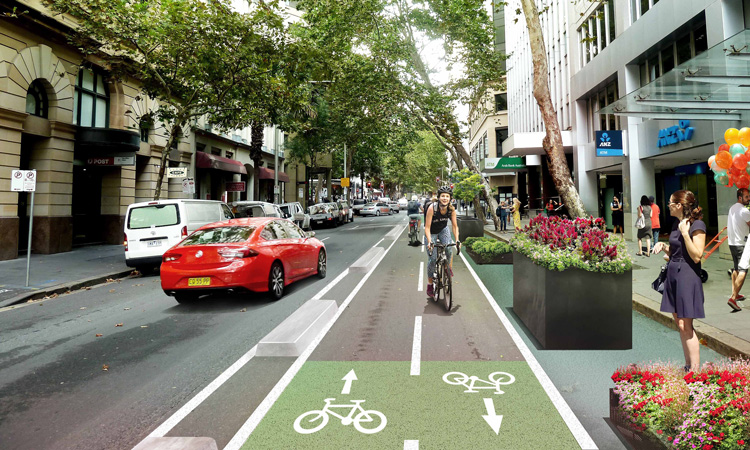 The City of Sydney has announced that it is creating new spaces for people walking and riding to allow for safer travel between workplaces, schools, healthcare and the city centre.

The rapid roll-out of trial cycleways on key routes aim to provide an essential transport option for many residents of inner suburbs and reduce crowding on public transport. Walking paths and widened streets will allow people to maintain required physical distancing, connect to key locations and support local businesses.

The Lord Mayor said that as restrictions continue to ease, there is an urgent need to support more people to walk and ride, and help prevent further spread of COVID-19.

“We already have an extensive programme of cycleways and public domain improvements, but we need short term tactical measures that can be implemented in weeks,” the Lord Mayor said. “The infrastructure we’ve chosen will be quick and simple to implement, adaptable and inexpensive.

“As our roads have been quieter during the pandemic, many people have decided to take up cycling. We’re hoping these safe cycleway connections help people keep that up. When someone rides to work, they take a car off the road or free up space on public transport – this will be even invaluable when people start returning to the City and seek to maintain physical distancing.”

The City of Sydney and Transport for NSW will each install three new separated cycleways using a combination of barriers, line markings and lane dividers.

There will also be a rapid roll-out of temporary footpath widening in areas of high pedestrian activity in the CBD, as well as support for local businesses in inner-city village centres and along main streets.

“The City will explore closing some city streets at lunch time, or temporarily widening footpaths to create more public space next to food and beverage offerings and enable clients and workers to get to and from work,” the Lord Mayor said.

“In Sydney, short trips by foot and bike have become the new norm, with a growing number of people walking or riding around their local area.

City of Sydney, Transport for NSW