The fully automatic Val type underground in Turin, Italy is to be extended by 1.6 kilometers. Infra.To has just placed a corresponding order with Siemens Rail Systems… 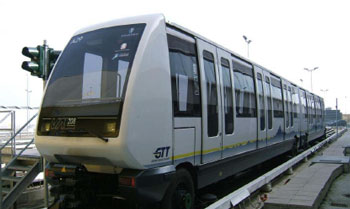 The fully automatic Val type underground in Turin, Italy is to be extended by 1.6 kilometers. Infra.To, the company that owns the Turin Underground infrastructure, has just placed a corresponding order with Siemens Rail Systems. The line extension is to be opened for revenue service by the end of 2015. Turin’s first underground line will then serve 23 instead of 21 stations. Metro services will not be disrupted by this construction work.

Gruppo Torinese Trasporti (GTT) has been operating the fully automatic metro line in this northern Italian metropolis since 2006, with rolling stock and automation equipment from Siemens. Now this line is to be extended to the south by two new stations “Italia ’61” and “Bengasi”. Together with the Italian partner Tecnimont, Siemens Rail Systems is to supply the Val control systems, carry out the necessary adjustments in the operations control center, and bear responsibility for taking care of the certification and authorization work involved in the commissioning of this line. The trial integration in the overall system is also part of the order content. Siemens’ share of this master agreement amounts to EUR 17.1 million. The order was placed by Infra.To, the company that owns the Turin Underground infrastructure, with the Transfima EEIG Group (Siemens/Tecnimont).

With 7.6 kilometers of track and eleven stations, the first section of Line 1 was officially opened in February 2006 for the Olympic Winter Games. The second line section, which followed in October 2007, added two more kilometers and four more stations to the underground system. In 2011, a third line section with six new stations and 3.6 more kilometers was opened.

Worldwide, Siemens has already supplied twelve fully automatic Val type metro systems including four airport shuttles: one at Orly and two at Charles de Gaulle in Paris, France and one at O’Hare-International Airport in Chicago, Illinois, USA. Val systems can also be found in operation in the French cities of Lille (two lines), Toulouse (two lines) and Rennes, as well as in Taipei, Taiwan and Uijeongbu, Korea.

Since 1983, more than two billion passengers have traveled on Val systems supplied by Siemens. The operational availability of the lines is more than 99 percent.