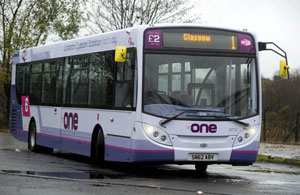 The company has unveiled plans for a brand new network called, ‘Simplicity’. It is scheduled to launch on May 12 and will provide a host of benefits for customers:

Plans for Simplicity, which when implemented will be the biggest improvement to services since the late 1990s, will benefit those living within the city and across Greater Glasgow.

The company, which moves some 114 million people every year, today launched a public consultation for Simplicity and is inviting customers to review and comment on the changes.

“This is good news for our customers,” said Managing Director of First Glasgow, Ronnie Park.

“We are proposing to introduce a brand new network that will significantly improve and simplify our network.

“Simplicity will give our customers confidence that they can expect a bus every ten minutes or better during the day on the Simplicity network. We want to make life easier for passengers so they know a bus will arrive at a bus stop within a matter of minutes.

“Services every ten minutes or better will encourage more people to use our buses and to use them more often. Our aim is to make Simplicity one of the best bus networks in the UK.”

He continued: “Glasgow has changed considerably since the current network was introduced in the 1990s. A new network is required which better matches the travelling needs of the city, especially as we approach the 2014 Commonwealth Games. The launch of Simplicity will make it easier and more convenient for people to visit the city centre, get to the shops, the cinema, sporting events and other leisure activities.”

He added: “Further investment in the network is planned, including the introduction of a number of new buses later in the year, as we look to increase passenger numbers and grow our business.”

Ronnie Park stressed that plans for Simplicity are not set in stone. “We’re excited about our plans to improve the network in Glasgow, however, we want to ensure that customers share our enthusiasm. Therefore we began on Monday (18 February) a public consultation – we want anyone interested in bus services in Glasgow to engage with us and tell us what they think. That consultation, which will include customers, politicians, staff and other stakeholders, will help us shape our final plans.”

Following the conclusion of the public consultation on 1 March, First will engage with SPT before submitting plans to the Traffic Commissioner. A new network is expected to begin May 12.

Members of the public can view and comment upon First Glasgow’s plans by visiting www.firstgroup.com/glasgow.

One response to “Bus services in Glasgow set for major improvement”