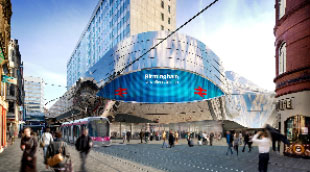 The Midland Metro is to temporarily close this Easter so work on a £128 million project to extend and improve the tram system can be carried out.

The line between Birmingham and Wolverhampton will be shut after the last tram on Good Friday (March 29) and reopen on Monday April 15 to allow engineers to modify existing platforms for a £40 million fleet of new and bigger trams.

The 20-strong fleet will start to go into service on the current route during 2014 and will enable Centro, the region’s transport authority, to increase the system’s frequency to 10 trams an hour throughout the day.

This will increase capacity by 40 per cent, easing the overcrowding that can sometimes occur during the morning peak as a result of the Metro’s popularity.

All the new trams will be running by 2015 when an extension of the system through the streets of Birmingham city centre from Snow Hill Station to a rebuilt New Street Station opens.

Paul Griffiths, Centro’s Metro Programme Director, said: “We appreciate that the closure will cause disruption for passengers but it is the only way we can carry out the work.

“We have chosen the Easter period because many people take the school break off work which means fewer passengers will be affected.

“Deferring the engineering work until the school summer holidays would jeopardise the build programme for the city centre extension and the deployment schedule for the new trams.

“We apologise in advance for the inconvenience but the benefits that this project will bring for passengers are substantial. It really is a case of short term pain for long term gain.”

Thousands of leaflets will be available over the coming weeks giving passengers full details of the closure and alternative travel arrangements.

Posters will also be put up at stops along the line and there will be regular announcements over the passenger information system.

The information will also be available on line at NetworkWestMidlands.com from tomorrow (Friday February 15).

Apart from alternative bus and rail services there will also be a limited replacement bus service in operation, running at a minimum of 30 minute intervals and calling at 12 locations along the Metro route. It will operate between 6:30am and 7:15pm Monday to Saturday during the closure.

The city centre extension will run from Snow Hill Station, along Upper Bull Street, Corporation Street and Stephenson Street where it will stop outside New Street Station which is currently undergoing a £600 million rebuild, also due for completion in 2015.

The Metro extension and new trams, a joint project between Centro, Birmingham City Council and the Black Country councils, will revolutionise the way people travel around the city giving a convenient link between Birmingham’s two major rail stations.

It will also provide a much needed and easy connection from New Street to the emerging business district at Snow Hill, the unique and historic Jewellery Quarter and out into the Black Country using the existing Metro line.

The extension will also serve as a platform for future Metro routes such as to the city’s forthcoming high speed rail terminal and Centenary Square.

The new trams are being built by Spanish manufacturer CAF.