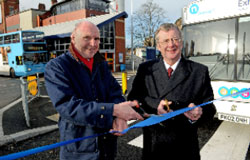 A new access into Coventry’s Pool Meadow Bus Station has been formally opened.

The access, which comes off White Street and enters the site between the former fire station and Junction 2 of the city ring road, was completed on time and on budget at £284,000.

The work was funded by Centro and Coventry City Council and carried out by the council’s own Direct Labour Organisation.

The project has also seen the introduction of a new bus and cycle lane in nearby White Street and improved access to the coach park there.

Councillor Lindsley Harvard, Coventry City Council Cabinet Member for City Services, said: “This is a simple, very effective solution. It will be easier for bus operators to access Pool Meadow and better for bus passengers.

“It will also mean that we can make improvements outside Pool Meadow – widening pavements and narrowing the roads, which will help to improve the whole area.”

Cllr John McNicholas, the chairman of Centro and a Coventry City councillor, said: “This project has been a successful collaboration between Centro and Coventry City Council and I am delighted that it has worked so well

“The new access will improve services and safety for bus users and pedestrians alike.

“Enhancing facilities such as Pool Meadow and introducing a new bus and cycle lane in White Street is all part of our aim to reduce journey times and provide a vibrant and viable network.”

The work will make it easier for passengers to access and exit Pool Meadow on Fairfax Street, which runs behind the bus station.

The coach drop-off and pick-up bays in White Street will allow coach passengers easy access to the facilities in the station.

They will also be in a good location for access to two of Coventry’s major tourist attractions – the cathedral and Transport Museum. Coaches will then be able to park in the new coach park.