Posted: 29 January 2013 | Transport for Greater Manchester (TfGM) | No comments yet

Greater Manchester’s Metrolink has a new Director, following Philip Purdy’s decision to return to his native Australia in spring… 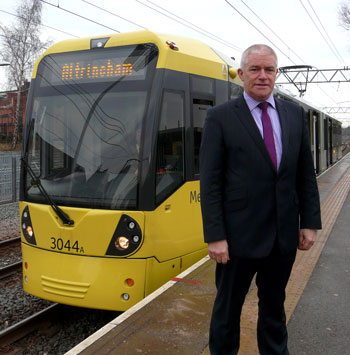 Greater Manchester’s Metrolink has a new Director, following Philip Purdy’s decision to return to his native Australia in spring.

Peter brings a wealth of expertise and experience in the rail industry to the role, not least in rejuvenating Central Trains as Operations Director between March 2003 and January 2005.

He was part of the team involved in the DfT’s remapping of the heavy rail network that saw the creation of the East Midlands Trains, London Midland and Cross Country franchises, and has also worked on several rail franchise bids, winning three.

In recent years, Peter has worked with TfGM’s Metrolink team on a long-term but interim basis, overseeing existing day-to-day operations during the current £1.4 billion expansion programme.

He will formally take up the role of Metrolink Director from 4 February, ahead of Philip returning to Australia for family reasons.

Councillor Andrew Fender, Chair of the TfGM Committee, said: “Peter’s appointment puts Metrolink in very capable hands. He is thought of very highly within the industry and brings a great deal of experience to the role.

“In recent years he has been supporting the existing team while we deliver the £1.4 billion Metrolink expansion and, in doing so, has built up a thorough understanding of the network.

“In welcoming Peter, we have to bid farewell to Philip who has steered Metrolink through the most challenging period in its history with grace, professionalism and absolute dedication. We wish him and his family the very best for the future.”

Peter said: “I’m delighted and looking forward to the exciting challenges ahead. The Metrolink network will soon become the biggest light rail system in the country and, as part of that, is undergoing the most significant change in its history.

“It is a remarkable achievement, driven entirely by its own success, but a project of this magnitude, on an existing, well-established and well-used network, is going to come with some growing pains and teething problems. How we work through those inevitable issues is crucial.

“The network has grown steadily from an ambitious vision in the early 1980s to part of the fabric of daily life in Greater Manchester. It is a crucial part of what the area has to offer and is the envy of most other major cities; it is something to be incredibly proud of.

“For me, the aim is to continue the fantastic work Philip and his team have done in very challenging circumstances: managing the delivery of the expansion – the largest transport project in the country outside London – at the same time as running an effective day-to-day operation.

“Passengers want a service that is reliable, clean, efficient, and focused on their needs – that’s what our focus is and will continue to be as we grow.”