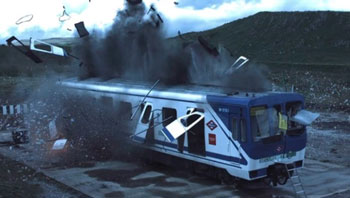 Blast-resilient carriages that are better able to withstand a terrorist attack and ultimately save lives have been developed by a world-leading team of engineers.

Developing a range of blast-proof technologies and systems, the EU-funded SecureMetro project team has designed a new generation of train and metro vehicles to reduce the impact of a possible bomb attack on our railways. Credit: Newcastle University/PA Wire

Developing a range of blast-proof technologies and systems, the EU-funded SecureMetro project team – led by Newcastle University, UK, and involving experts from across Europe – has designed a new generation of train and metro vehicles to reduce the impact of a possible bomb attack on our railways.

Led by Mr Conor O’Neill in the NewRail research centre at Newcastle University, the project has focussed on two key areas; containing the impact of the blast and reducing debris – the main cause of death and injury in an explosion and the key obstacle for emergency services trying to gain access to injured passengers.

Analysing the carriages involved in the London Underground bombings, the team have now re-designed current vehicles and have just completed a full-scale test on the prototype. The aim is for the new technology to be incorporated into European and national standards and regulations.

Mr O’Neill, based in the School of Mechanical and Systems Engineering at Newcastle University, explained: “The Madrid bombings in 2004 and the 7/7 attack in London the year after highlighted how vulnerable our trains are to attack – particularly busy metro and commuter trains.

“At the same time we have to be realistic – completely replacing existing vehicles just isn’t an option. Instead, we have developed and incorporated new technology and materials into existing carriages to improve performance.

“And what we’ve shown is that companies could make some relatively cost-effective and simple modifications that would significantly improve the outcome of an attack.”

In a controlled, full-scale explosion on a decommissioned metro carriage, the NewRail team began the process of assessing the impact that a terrorist attack can have on the vehicle structure. Understanding the progression of the blast wave as it travels the length of the coach was key to understanding how the interior furnishings reacted to the blast force.

Filming the explosion – which takes less than a second – the team used high-speed cameras to slow down the blast footage in order to understand the mechanics of the explosion.

Learning lessons from this experiment, a similar test was carried out on a prototype, designed and built specifically with blast resilience in mind.

Tethering down heavy equipment such as ceiling panels and equipment using retention wire, plastic coatings on windows and the replacement of heavier structures with lighter-weight and energy-absorbing materials were some of the key modifications made to the prototype.

“The window coating we developed was also incredibly effective. Without it the windows are blown outwards – putting anyone outside, such as those standing on a platform, at risk from flying glass. With the plastic coating you see a clear rippling effect as the blast moves through the train but every window remains intact apart from the safety windows which are designed to be easily knocked out.”

The team have also investigated the benefits of dividing up the carriages using energy-absorbing materials that reduce the impact of the blast.

As a result of the research and testing conducted the SecureMetro project is now in a position to advise the rail industry on which design approach will improve the resilience of rail vehicles in the event of a blast.

Mr O’Neill adds: “A bomb on a train is always going to be devastating but what we are trying to do is find a way in which the vehicle itself can help to mitigate the impact of an attack.

“These are all low-cost, simple solutions that can be put on existing trains which could not only save lives but also reduce the attractiveness of our railways for potential terrorist attacks.”